Frustrated that our American government is detaining desperate migrants in unsafe, unhealthy and increasingly deadly conditions at the U.S. Southern border ... and our news cycle is getting distracted by politicians who want to debate the morality and patriotism of a pair of sneakers. 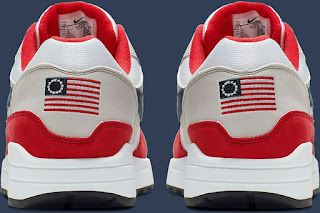 (Read about what I think of corporate moralizing here)

Frustrated that a presidential administration grounded on rudeness and an ethos of non-apology, take-what-you-can-get, screw the other guy mentality is seeping into American culture (and has been long before President Trump), such that relationships are fraying and even family bonds are weakening.

Frustrated that we're putting young families and Kindergarteners and college freshman in an unsustainable pressure cooker.

Frustrated that American economic gains don't seem to touch the working families in my community, including my own.

Frustrated at predatory lending practices, and sky-high interest rates on graduate school government loans that I'm still paying off for a career as a minister. You know, a super lucrative profession.

Frustrated that the more money and power are a part of American churches, the more the Spirit is quenched - on conservative and liberal sides of the aisle.

Frustrated that people will say one thing in a private message or conversation and another thing publicly, when it might threaten their place in an insiders' club, whether it's the church or media or even social life.

Frustrated that the people doing the most essential work are the ones being paid the least money.

Frustrated that mosquitos are bigger this year than I've ever seen them.

Frustrated that my stomach never will look the same after two big boy babies, no matter how much I work out.

Frustrated that it's so hard to get money back from a charge that never should have been made.

Frustrated that the odds seemed stacked against us.

Frustrated that sources of hope are too often silenced and dismissed.

Because God's is the only call that matters.

Because when I find myself alone, on a precipice, God shows me a vision of a boat, filled with oars, which my loved ones are rowing furiously, honestly, in the direction where we want to go.

Sometimes people I didn't expect to see are on that boat with me, rowing together, harder, faster. They're men and women, white and black and Asian and Latinx, young and old, rich and poor, even dead and alive.

I see them rowing and I hear the sound of the slippery water, falling over the oars as they row harder - with me - together. We won't stop. We won't turn around.