The monetization of protest, and the destruction of America

Maybe you'd expect me to be out there right now buying more Nike shoes and apparel, as last year I defended Colin Kaepernick's right to kneel during the national anthem to bring awareness to police violence against African Americans. 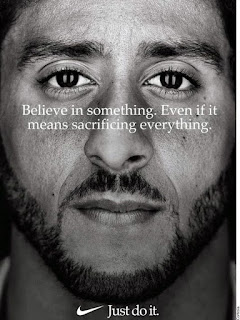 I still believe Kaepernick's kneeling protest was ultimately respectful and in line with the silent protests of African Americans for generations in America: protests that led to Civil Rights and a breaking down of the racial inequalities that have plagued America since its genesis.

Just because I believe Kaepernick has a right to kneel, I won't be buying more Nikes. 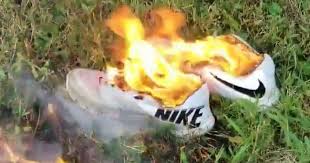 The truth is that I've had it with this monetization of protest. It's the same reasoning that the U.S. Supreme Court affirmed in the 2010 Citizens United case, which defined corporations as having similar rights to persons, at least when it comes to election financing.

I think we've taken another step toward full corporate personhood in 2018, with a reality TV President whose decision-making tends to boil down to: which is better for me and for my bank account - and with mirror corporations that serve opposite sides of the political spectrum - ultimately it seems that most of our national dialogue is being conducted in ways that promote dollars and cents, rather than rights, justice and mercy.

As a young American, I find that frustrating and defeating. Do I believe that Nike wants to have a national discussion about police violence toward African Americans and racially equitable policing practices? 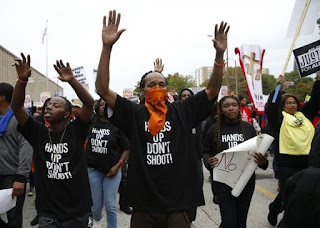 Because Nike's ad wasn't about the issues at all. It was purposefully contentious and controversial, but it didn't really say anything. It took a position on a national hot topic, ostensibly to woo the more-liberal millennials, among whom its sales had been flagging, and to stake out a position that would hopefully ensure future sales.

Nike didn't say anything about the causes Kaepernick sought to promote, because as a corporation, Nike isn't really about causes any more than Starbucks is about hosting conversations about race over Frappuccinos. This is about the bottom line, period.

My problem is that this purported corporate citizenhood is doing little to promote justice causes and doing much to divide our nation. Now simply wearing Nikes can make you unpatriotic and therefore un-friendable by a large proportion of Americans. Say the same about shopping at Home Depot, buying Papa Johns pizzas, choosing Wal-Mart over Target, Sam's Club over Costco, or shopping at Nordstrom after it discontinued Ivanka Trump's clothing line.

It's easy to divide Americans by their consumer choices; it's harder to make real progress on the real justice issues that continue to plague our nation. American children are still killing themselves because they're bullied at school after revealing they're gay. Residents of Flint, Mich., most of whom are African American, still don't have clean drinking water. Puerto Rican Americans are still living in hurricane ravaged homes, without federal aid to repair and rebuild. American schools still must conduct active shooter drills in case of school shootings. Children are still separated from their parents in detention centers at the U.S.-Mexico border.

You still have to sit down to Thanksgiving dinner with your politically different friends and relatives, unless politics have divided your family, too, and you'll prefer scrolling down your politically homogeneous social media feed, where people are either buying or burning Nikes, to actually having an in-person conversation with your flesh and blood.

A friend of mine who works in sports journalism and happens to be African American posted on Facebook in the midst of Nike-motivated hysteria.

Man, nobody you know is burning Nikes. And they aren't going to give them to your charity.

This post related to a spat of liberal-leaning posts that asked people to donate their Nikes to various charities, rather than burn them.

My friend since deleted his post, but it rang true with me. Who are we really talking to? It's not to one another. Most of us no longer have many Facebook friends who disagree with us politically, and if we do, they generally aren't seeing our posts.

What are we really accomplishing by giving our diehard loyalty to various corporations, none of whom are motivated by anything but fidelity to their shareholders?

Another friend of mine, who happens to be white and works in technology, has sworn off Google and Amazon in favor of various right-wing alternatives like Rakuten and Ask.com.

We've long had our own news networks: liberals are more likely to choose MSNBC, while conservatives - and President Trump - pick FOX. CNN, the most centrist cable news network, had long finished last in rankings, despite being boosted as Trump's most-hated network.

The only thing that this supposed corporate citizenship has done is force us into living in parallel universes, creating little space for overlap and dialogue. Having recently lived in dark red North Orange County and dark blue Southwest Minneapolis, I'm one of a shrinking number of people who regularly interact with people of varying political viewpoints. Side note: the other place I regularly do this is in the Church, as a Lutheran Pastor.

The best way to hone our views with compassion and an eye toward justice is by speaking with people who are different than ourselves. Despite Starbucks' best efforts, corporations who take political positions to score an easy win with whatever demographic group they're currently courting don't do anything to promote civic dialogue and - ultimately - justice.

Burning or buying Nikes I suspect won't do anything to hold rogue police officers accountable, or to make water safe in Flint, or to protect women from sexual assault. It also won't give women alternatives to abortion, or promote Christianity, or strengthen American families.

All it will do is give Americans another reason to hate each other - and diminish our country in the process.