The Most Important Thing a Pastor Can Do

I've been a part of the church for a very long time now, technically since I was two months old, when my Pastor dumped water on my head and made the sign of the cross. Or maybe before, when that same Pastor visited me in the hospital after I was born.

Still, I have to be honest. I've never felt 100 percent comfortable as a part of the church. You might be surprised to hear this coming from a Pastor, but I always felt like I was physically inside the church while mentally held outside its walls of acceptability.

In high school, I went to Youth Group, joined the leadership team, and even traveled across the country on a 15-passenger van for a high school mission trip.

But I always kept a little distance between myself and those who I thought of as the "church kids," the ones who went to every event and always seemed just a little holier, a little less sinful, a little more conventional than me.

Even when I prepared to go to seminary, I thought of myself as "different." I lived off-campus with a friend from high school. I strolled into morning classes late, wearing sweatpants, tall black rain boots, and a tattered green sweatshirt my dad had gotten from the Lost and Found 10 years ago.

I sat in the back row and kept my head down most of the time, even though I'd done all the readings and knew the material backwards and forwards. Every once in awhile, my hand shot up because I felt compelled to make some inarguable - and often unconventional - argument. But most of the time, I kept a low profile.

During my last year of seminary, I finished mostly in online classes from San Francisco, where I lived with my husband and newborn son. I kept myself so under-the-radar that, after turning in online papers and returning to Minneapolis for graduation, a seminary professor who had read my final paper stared at my nametag and called out: "Are you Angela Denker?"

He had been stunned by my final paper, in which I tended to make arguments using 90s rap and sports analogies to explain complex theological arguments. But he had no idea who I was: just a name on a page, a person far away - someone who always felt on the outskirts of the acceptable world of seminary.

Some of you reading this might be surprised by this. On the outside, I've always tried to maintain conventionality in the church. I mostly dress appropriately now, though I did wear a Tupac t-shirt to teach Bible study a few weeks ago. I'm a white woman who is married to a man and the mother of two boys, so I get passes many of you don't, and I'm aware of that. I grew up solidly middle-class. Nothing about me screams CHURCH MISFIT. 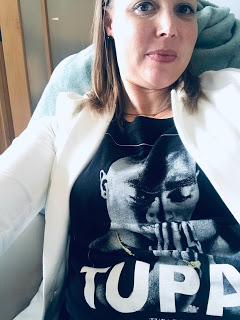 Still I suspect many of us feel this way inside, despite our outer appearances. And maybe that's part of the reason the American church is struggling today (hypocrisy, abuse, and irrelevancy notwithstanding). The (white) Church, perhaps at its height in the 1950s, became in many ways the height of conventionality in America. It became associated with white, middle-class norms (with the notable exception of African American churches and their dynamic role in Civil Rights and social protest). To be a Christian, in my white suburban high school, meant that you were conventional, and maybe, boring.

I wanted to love Jesus, but I never wanted to be boring. I also didn't want to be stainless and sinless and, ew, pure. I would rather be forgiven and redeemed and a clay vessel, holding inside my imperfect, impure walls the uncontainable treasure of the Holy Spirit.

It's a wonder I survived all this way, battling within and without a church that squelches creativity and non-conformity, demanding perfection, encouraging hypocrisy and lies rather than authenticity and moral failure.

I survived, a Christian: redeemed and a sinner and a lover of Jesus today, for a lot of reasons, principal among them the presence in my life of some fellow unconventional Christian leaders, who made space for me in an American church world that wasn't made for us.

I want to tell you about one of those leaders today, and how he did for me and for so many the most important thing a pastor can do. 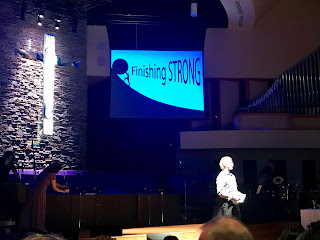 The Rev. Dr. Mark Wickstrom officially retired from ministry this past weekend in Las Vegas, where he spent 14 years as senior pastor of Community Lutheran Church, one of the largest and whackiest churches in the Evangelical Lutheran Church in America. I say "whackiest" fondly, because as an intern pastor serving with Dr. Mark, I often felt like a ringmaster. We had five different services with five different and distinct musical styles: acoustic coffeehouse, traditional lite, Gospel choir, guitar contemporary, country-western gospel with the Honky Tonk Angels.

Mark began his church career as a long-haired guitar player and youth pastor in Minneapolis' wealthiest suburb. Kids, who thought they were too cool for church, found themselves jumping up to look in the window while Mark played his guitar and swept his long hair out of his eyes, bearing a not-so-slight resemblance to Richard Branson.

The youth program at that church swelled. Hockey players came to youth group after their games. Kids spilled their guts. Nobody was left out. Among those youth group kids were future executives and future Christian authors, among them those who would lead the emergent church movement of the late 20th Century.

Eventually Mark felt called to minister to adults. He'd grown up in a small church sect, went to a Presbyterian seminary in San Francisco, and in Minneapolis, he found himself in a board room explaining how and why he'd become Lutheran, the denomination in which he'd earn a doctorate in ministry. Denominations themselves never mattered much to Mark. You'd say his name to people higher up in the church, and they'd know who he was, but he never knew them. He was in his own world of ministry and unconventionality, creating a space at one of Minnesota's largest churches for contemporary worship and - anathema to much of Lutheran tradition - SCREENS.

Mark spent more than 30 years carving out his space in the kingdom of Minnesota Lutheranism. Ultimately, though, his creative spirit needed more space to soar. He accepted the call to Las Vegas, where he opened the doors of the church to performers from musical theater shows on the Vegas Strip, bringing professional musicians and their immense talent into the walls of this Vegas Lutheran Church.

He changed the sanctuary. He preached with pictures. And, long before much of the rest of American Christianity, Mark witnessed to support of persons who were part of the LGBTQ communityin the church, writing a book with a chapter including a theological argument for inclusion of LGBTQ relationships as fully part of God's Kingdom, celebrated alongside heterosexual marriage.

His was not always a popular stance or one that Mark spoke a lot about publicly. But I noticed, even almost a decade ago, that he always said partner or spouse instead of just husband or wife in his sermons. He was purposeful in his inclusion. He knew how much it mattered.

Mark did this not just on principle but because of who his church had come to be. Its music ministry was anchored by gay men, one in particular, perhaps the most dynamic worship leader I have ever worked with: Bruce Ewing. For these Vegas Strip musical performers, most of them classically trained, straight and gay alike, Mark created a safe space to worship God and share their musical gifts as ministry. For many of them, this was the first time the church had embraced them as who they were: unique, creative, talented, and often - unconventional. 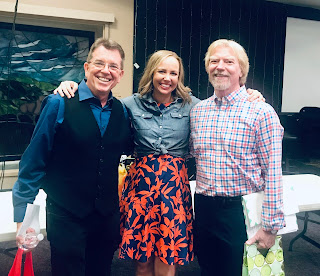 Me with Bruce Ewing and Mark Wickstrom 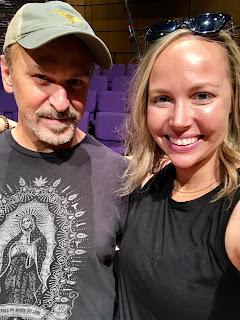 Me with Philip Fortenberry, one of America's finest pianists -
and one of the most spiritual men I know 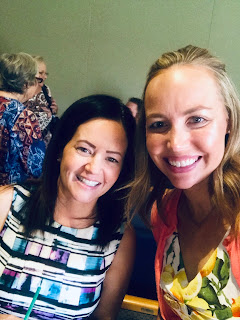 Me with Brandee, a mom, a friend, and a high-flying casino exec

Many of them had been turned away from other churches in town, told to sit in back rows, told they couldn't participate, told they weren't "good enough," that they didn't fit in.

Mark celebrated their gifts. He created space for all of them, for the creatives and the gamblers, the oddballs and the strivers, the rich and the poor, the old and the young, the men and the women, the conservatives and the liberals, the former Mormons and the former Catholics, the Midwestern Lutherans and the country crooners from the South.

He created a place for me, too.

I knew it was true. And honestly, I didn't want to look, sound, dress or talk like a Pastor. I just wanted to be me - and do ministry with the gifts God had given me.

I realized this past weekend, as I celebrated Mark's ministry alongside all of us misfits who'd walked beside him and learned from him inside these quite unconventional church walls, that Mark had done the very most important thing a Pastor can do.

It wasn't preach awesome sermons (he did that, too).

It wasn't lead great financial campaigns (he did that, too).

It wasn't provide comforting pastoral care (he did that, too).

It wasn't baptize, marry, and confirm thousands (yes, he did that, too).

Rather, it was this. He created space for all of us to be a part of God's church.

Someone else whose greatest work was expanding the Kingdom of God and making space for me and for you.

His name is Jesus. 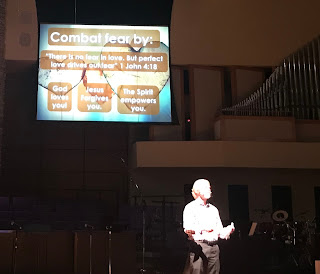 Mark's final sermon and a brilliant encapsulation of Trinity 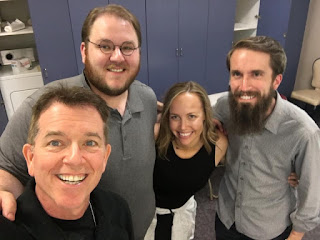 Some of Mark's lucky protegees: me, Bruce, and my fellow former intern pastors, the talented - and unconventional - Josh Stibb and Michael Stoops