All I Did Not See: Daunte Wright

In Junior High my church youth group took a trip to the Brooklyn Center Community Center. At that time, it was the coolest pool around. They had multiple waterslides and a huge area for swimming, with big windows you could see from the nearby highway.

At that time, Brooklyn Center was more than 70 percent white, a blip on the map between Brooklyn Park, where my mom taught school and I went to the dentist and the pediatrician, and the state's largest city, Minneapolis.

Time and places and demographics shift over the years in America, and with them our cultural consciousness shifts. My dad told me that when he was growing up, North Minneapolis was where all the "rich people" lived, while his dad returned from World War II, and his parents got a little house in the suburbs.

When I was growing up, the New York Times called North Minneapolis "Murderapolis," which may as well have been code for saying "where the Black people lived" in this majority White metro area. I grew up in Maple Grove, then an outer ring suburb surrounded by cornfields and gravel pits, bordering Brooklyn Park and Brooklyn Center to the west.

My young mind couldn't comprehend nuance, then. Later on, I worked for a Congressman and was shocked to see he lived in Minneapolis, which I thought of as downtown office buildings or neighborhoods full of small, older, run-down homes. I didn't know then how close extreme wealth and poverty lived to each other, how one made the other possible.

I didn't see then, when I rode the church van to slide down waterslides at Brooklyn Center Community Center, how the world around me was changing all the time. How Brooklyn Park and Brooklyn Center were rapidly becoming majority-minority suburbs, and Maple Grove was increasingly filled with shopping, restaurants, and new schools - and upper-middle-class White people. My school district split on racial lines. The East side of the district, where my mom taught, was mostly students of color. Lots of recent immigrant families and families living in poverty attended schools in Brooklyn Park, while I open-enrolled to a brand-new high school on the far west side of Maple Grove.

Back then when people talked about "good schools" and "good neighborhoods," I didn't realize we were talking about racism and redlining. When the DARE officer visited my school to teach us about drugs, and I later found out he went to my church, or his wife knew my mom, I didn't realize that on the other side of my school district Black parents were having "the talk" with their teenage kids and younger, afraid of their Black sons being killed by police during a routine traffic stop.

My parents never told me that I had to put my hands on the steering wheel and say "yes sir," if I got pulled over. I was so naive the first time I did get pulled over for speeding, during high school, that I pulled to the left side of the highway. The officer got out, saw a blonde white girl behind the steering wheel, and calmly told me I had better get back on the road and pull back off to the right.

I've been pulled over a number of times since then in Minnesota. I've gotten speeding tickets and once a ticket from looking at my phone. One time, I'm embarrassed to say I didn't have my license with me, and the officer took my word for it and gave me a small ticket for something else.

American Christians talk a lot about grace, me included, but we don't seem to have the same grace for every American. People talk about how sick they feel for former Brooklyn Center Police Officer Kim Potter, who despite 26 years on the police force claimed she grabbed her gun by mistake instead of her Taser, killing Daunte Wright just 2.5 miles from the Brooklyn Center Community Center where I swam with my church youth group in the 90s.

Kim Potter seems to automatically get a lot of grace from the same people who say that Daunte Wright should have done everything different. He shouldn't have "resisted arrest," he shouldn't have had a lapsed car registration, he should have showed up for his hearing, even if the notice was mailed to the wrong address. He shouldn't have moved addresses, even if a global pandemic hit people living in poverty hardest. He shouldn't have had a child at a young age, even though American health coverage disparities too often deny birth control and sex education to people living in poverty. In a lot of conversations among white American Christians, Daunte Wright gets very little grace, as did his parents before him, an interracial couple without a lot of money raising a Black son in Brooklyn Center. 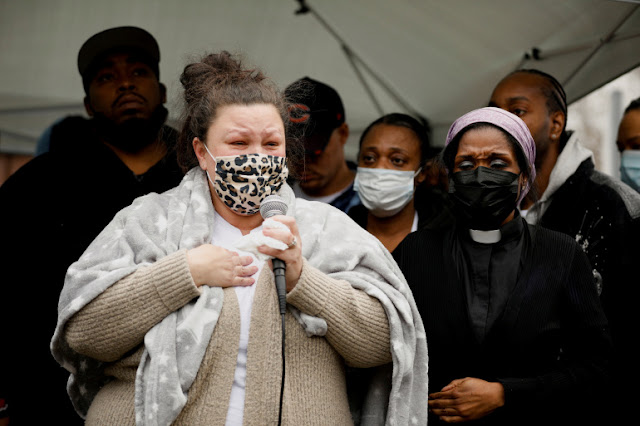 Daunte Wright's mom, Katie, speaks at a vigil in his honor in Brooklyn Center, comforted by a clergywoman. Photo Credit: Reuters
When I grew up I thought that in America all it took was hard work and doing the right thing in order to succeed. I didn't see the layers and layers of inequity that my whiteness rendered invisible, making it easy for me to point to individual decisions and think that someone's misfortune was somehow their fault. Surely, I had nothing to do with racism in Minnesota - even when I heard people in my hometown call Brooklyn Park "Brooklyn Dark."

I thought doing things like giving to the food shelf or volunteering at a shelter would mean I was making all the difference I needed to make. I saw white high school-aged volunteers from church playing with kids of color at the shelter in Minneapolis, and I thought we were so great: earning all of these community service hours for our college applications. I didn't see or understand what these kids' parents were going through and why they weren't there.

I learned about slavery and the Civil War and the Underground Railroad and abolitionism and Civil Rights in school and at church, and I assumed that because I grew up in a northern state, and my ancestors weren't Confederates, that I could somehow situate myself on the "right" side of American history, ignoring the Indigenous people my ancestors killed and displaced in Minnesota. I didn't see that the stories of slavery and the Civil War and the Civil Rights movement continued on today, and that in his time Martin Luther King, Jr., was tracked by the FBI, hated by most white Americans, and called a Communist sympathizer, just as leaders of the Black Lives Matter movement are called today.

I believe that part of the experience of faith is that of ongoing revelation, and that as God continues to reveal truth to each of us, sometimes growing in faith resembles fumbling around in a dark and shadowy room, unable to decipher what is right in front of our eyes. I have felt this way often over the past five years or so, as Hope and Change faded into Blood and Soil - and American Christians worshiped at a golden altar of power, money, and hatred.

After George Floyd was killed under Minneapolis Police Officer Derek Chauvin's knee last year on May 25, just 5 miles from my house, I attended a protest march for clergy members, and another one in downtown Minneapolis. I learned about a training in civil disobedience that was being put on by a national leader in the movement. On a hot June Saturday in a church parking lot in South Minneapolis, I learned about the intricate strategy and organization behind peaceful protest and civil disobedience. There was purpose and order and instruction and rules.

Revelation means confusion and shadows and uncertainty and then sometimes seeing, clearly, what you once did not see. After attending that training, when I see Black Lives Matter protests, like the ones happening in Brooklyn Center this past week, I see strategy and engagement. I see two opposing sides attempting to spread their narrative. I see law enforcement resistance to the protesters' narrative, which holds law enforcement culpable for playing its part in violence against Black Americans, and unlawful use of force resulting in deaths of unarmed Black Americans in encounters with police. The tear gas and flash bombs tell a narrative story of chaos and violence. Whose violence do we notice? Who do we hold responsible? Who gets grace and forgiveness? Who is the threat? Ask yourself these questions - and then imagine the answers are the opposite of what you think. See how your understanding shifts. Ask yourself who you imagine "rioters" to be, and wonder why you think this and if it's really true.

Growing up White in Minnesota, there was so much I did not see. There is so much I do not see. Ensconced in my quiet neighborhood in a corner of Southwest Minneapolis, I have ample opportunity to willfully close my eyes and tell myself the same stories I once naively accepted as fact, about the story and the narrative and the violence and the actors and their race -- while at the same time pretending that I could live in a post-race America.

I cannot see with anyone else's eyes. Only my own limited vision. But with humility and resignation, I can begin to chop down the logs in my own eyes, to see in front of me all the things I never saw before, the stories I wasn't told, the tears shed in silence, the videos of arrests and deaths the White public never got to see that replayed themselves in generational trauma for Black and Indigenous Minnesota families.

White America is seeing anew in Minnesota what Black America has lived for far too long. Shattering of illusions always feels devastating for those who've built stories of ourselves around those illusions: land of the free, home of the Brave, the American Dream.

Many White Americans want to know the facts. The "whole story." We want to believe it's only about interactions of individuals: Daunte, the 20-year-old who resisted arrest; Kim, the longtime officer who made a mistake. It has nothing to do with us. I still feel that way when I first hear another awful story. I have to fight against my own selfish stories of self-preservation.

Just as the rain falls and the sun shines upon us all, no matter who we are, so too are we all inextricably connected in the human family. It's about us, whether we believe it or not. Maybe before we can see the truth of America's racist past and present, White Americans have to first grow comfortable with all we see when we look in the mirror. When we admit to the racism in our own life story, when we feel the pain in the depths of our souls that comes from this deep, entrenched national sickness and sin, only then can we begin to submit to change the story of America's future.