Be: America's Self-Examination in 2021

I planned to blog today about a new word for 2021. Maybe you've heard of this tradition of choosing a word by which to live in the New Year ahead.

I'm into simple. I tried to make New Year's resolutions only to find that they all conflicted with each other, and they required at least 60 hours per day.

So anyway. I chose a word.

I've spent too little time thinking about how these accomplishments, work and various roles reflect on who I am.

It's easy to get lost when you forget who you are and instead allow yourself to be defined by others, who may or may not praise your various accomplishments.

I watched as Cruz puffed out his chest when he stood up, and his House colleagues around him stood and applauded.

Ted Cruz didn't care who he was in that moment. He cared what he did, or could do in the future. Cruz has always wanted to be President. Today, his values as a constitutional lawyer, a husband, a dad, a self-proclaimed Christian, went adrift, as they have been for many years. Now, he took an unforgivable step. He became a lawmaker threatening to overthrow the Constitution, the law he has sworn to defend. In that moment Cruz was swelled up by adulation, his values and principles tossed aside.

I don't know if Ted Cruz is thinking any differently now (probably not), when a mob of terrorists have stormed the U.S. Capitol in an attempt to overthrow American democracy. At least one woman has died after being shot at the Capitol.

There was an armed standoff inside the Capitol. 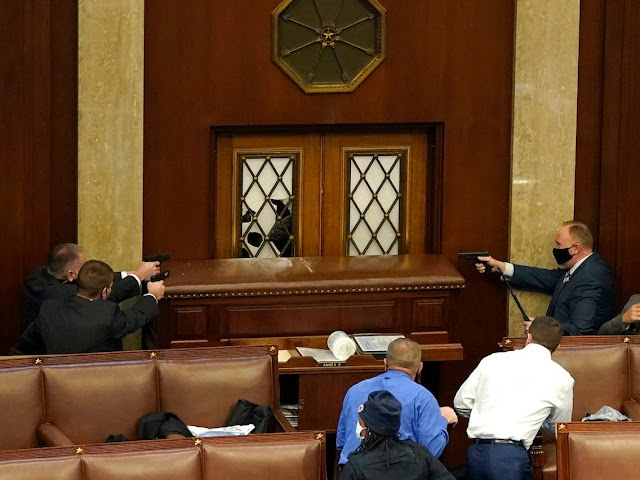 Incredibly courageous photo credit to Drew Angerer of Getty Images
We will be talking about the lasting effects of the last four years for many years in America. Frankly, I have been worrying about something like this happening today for weeks.
I am heartbroken thinking about the deployment of tear gas and gunfire on Black Lives Matter protesters all over America this summer, including here in my home town of Minneapolis. Meanwhile, today we watch armed anarchists and militia members storm the Capitol with very little law enforcement response.
Meanwhile, National Guard troops are finally called in to save America. Ordinary American men and women who signed up to serve their country and maybe get help with college tuition as they serve drill on weekends. They didn't deserve this. None of us did.
None of this is limited to the last four years. For far too long we Americans have valued our lives based on our bank accounts and our social media followers. We have lifted up liars and grifters as role models to emulate.
This year, I am going to try and BE. Focus on the following questions: Who am I? What are my values? How do I love my neighbor as myself? How do I follow the Jesus Ethic? Do I consider what Jesus would do in every critical situation in my life?
My prayer today, as I continue to watch armed protesters punching law enforcement officers on the steps of the Capitol in Washington D.C., is that maybe America can reexamine herself, too - especially our leaders. If I may, especially our leaders who have supported the President for the past four years.
Reexamine ourselves. Who are we? What are our values? How do we love our neighbors as ourselves? How do we follow the Jesus Ethic, for those of us who claim to represent American Christianity? What would Jesus do today in America?
May God bless the United States of America - and may justice roll down like waters.
May you and I be those who do justice, love mercy, and walk humbly with our God in 2021.