Finding American Hope in the midst of Pandemic: from the Prairie to the Inner City

I drove out to the church on the prairie this morning, not so far a drive from the Minneapolis neighborhood where I live, but also a world away.

I drove quickly and then more slowly, from the crowded suburban highway to the two-lane rural road, past the little white church with the ironic sign, the Dairy Queen, the towns with German names like Cologne and indigenous names like Waconia, and then I turned right after 50 miles or so at the neon pink farm, waved hello to the horses and donkeys, slowed down past the Lutheran cemetery, and turned right again into the church parking lot.

The first few times I made this drive I could feel my heartbeat slow down about halfway there, the straightness of the road, the flatness of the prairie - forcing me to pay attention to breathing and driving and music and the steadiness of my own heart. Still alive.

Life was not such a simple thing as to be ignored.

Ever since the coronavirus I have made this drive less frequently. We are worshiping on Sundays, but most people still watch online, for safety's sake, and those who do come wear masks and sit apart. The local assisted living homes have ended visitations, and Confirmation and Bible Study were moved online or ended before the summer.

The Memorial Day celebration was canceled. Town baseball is just beginning again, in the hope that the prairie winds might sweep this virus far, far, away. People gather but cautiously. The virus is here, too, and the old are not faceless demographic blocs but grandmothers and grandfathers and cousins and aunts and uncles and fathers and mothers and community cornerstones. Life here is less anonymous, and so too is death. No one is spared the grief of not knowing.

I'm not thinking about all of that now, because every time I begin to imagine overwhelming anxiety and worry, my attention is directed outside, to the window to the left of my desk. White, billowing, clouds are hanging low in the sky, lazily buffeted by the prairie winds. 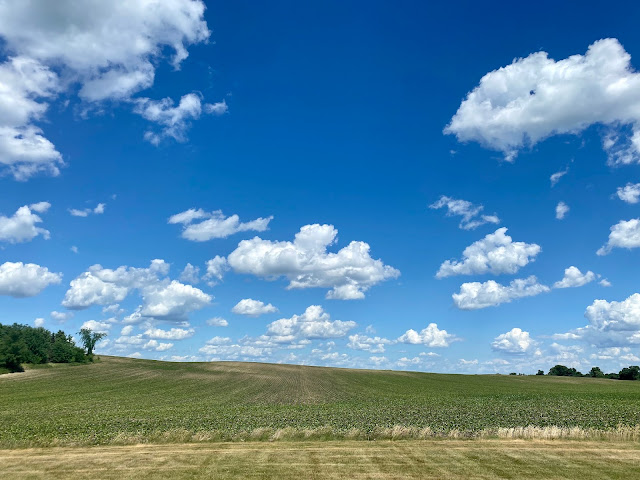 In California, where I lived twice, and in Nevada, where I lived once, the clouds never dared come so close to earth. Here, in the summer months, the clouds enjoy floating low, for the length of long and sunny days, above neatly planted rows of green crops.

Church and the world haven't been the same for months, but just the same the grounds needed mowing and the church sign needed painting, so some friends and church members gathered together last weekend to repaint it and repair it and plant some new hostas underneath.

It made me think of what they told us Martin Luther said, when asked what he would do if he knew the world was ending tomorrow.

Supposedly he replied, with that characteristic mix of brilliance and roguish arrogance: "I'd plant a tree."

I was reminded of those words this week, when I saw the photo of the church members outside, joking around, making repairs and living life - socially distanced and safely - despite the world's uncertainty.

When I read the news about the coronavirus I'm often led to believe that we have two choices: to live recklessly and die, or stop living altogether and not die. This is a false choice.

In times of hopelessness and fear, of the threat of racist violence and economic instability, families stretched to the max and people losing homes and loved ones to the unpredictable and terrifying sweep of Covid-19 -- we can choose to be safe and we can choose to keep living.

Greeted today by one man alone, putting the finishing touches on the newly painted sign, I was reminded that those who endure and survive in America have always been those who choose to invest in the future despite the calamity and pain of the past and the uncertainty of the present.

Here on the prairie, where the clouds hang low and people dwell closer to the land, this choice is lived out by many each spring and fall. Farmers, many of whom go deeply into debt each season just to try again, must live by faith in a way many of us can only imagine. For them a rain shower or thunderstorm or flood or drought is not an inconvenience but a matter of life and livelihood and feeding others and feeding their families. So they remind the rest of us how powerless we human beings really are, with our algorithms and smartphones and statistics and fake news.

Two summers ago I traveled across America to ask red-state and red-county voters about politics and religion. I found my share of hatred, anger, and hopelessness -- but most of that was on TV or on the Internet. People themselves in person are more complex.

Two summers ago this month, I traveled to what has been called America's most hopeless region: Appalachia. There I saw wrenching poverty and the ravages of the opioid epidemic. I also saw battered but not beaten hope, and people who were choosing to invest in the future of the people of Appalachia: like Traci, the young lawyer who returned to her Appalachian hometown to care for her grandmother, who'd had a stroke. Her grandma died, but Traci stayed. She cared about the people here. She was investing in a future that couldn't yet be seen, because the relationships she had in this town so many wanted to write off the map had convinced her to have hope.

I think about that trip often, as I remember cherished trips growing up to my grandpa's hobby farm in the Minnesota Northwoods, on green and algae-covered Lake Pokegama. We picked raspberries and wandered under archways of leaves, waiting for Grandpa to emerge out of the woods in head-to-toe mosquito netting. Eventually we'd meet his neighbors, too, find faces behind the names that were written on the nameless road that led to his home.

It's memories and people and places like these that remind me of the wrongness, or incompleteness, of an American narrative of death and decay. Our nation has its problems, chief among them a long and unresolved chain of racism and discrimination by white Americans of European descent against Black people and indigenous people and Hispanic people.

Somehow though I don't believe America's most challenging problems will be solved in boardrooms and by multimillion dollar corporations and political action committees. Many of them will be solved in inner-city neighborhoods, where communities live close and rely on each other, and know each other, so that individuals matter. These neighborhoods have too often been written off for having "bad schools," or "high crime," problems that are all-too-real but also often serve as a cover for racism, because these neighborhoods tend to be majority Black, or majority people of color in general.

These inner city neighborhoods I believe share something in common with a place too often considered to be their opposite, rural America: from the green hills of Appalachia, to the Midwestern prairie my family has long called home, to the wide expanses of open space that is still called the West, from Wyoming to inland California.

As I write this today, from a little church on the prairie just 85 miles from where Laura Ingalls Wilder lived the stories of Little House on the Prairie, I feel compelled to remind myself that here too is a place where America's problems have a chance of being addressed, with a solid dose of hope and community. Like those inner-city neighborhoods, here on the prairie people still know and rely on one another. Like those inner-city neighborhoods, the worst of heartless politics and economic calculations has led to rural despair and stress, the ruin of family farms, a dearth of opportunity for young people, lack of access to quality healthcare, depression and suicide and drug abuse.

And still, like the cashiers at the grocery stores, many of whom rode the bus to their essential jobs from homes in the inner city, the people here continue to work in the midst of global pandemic: in the fields and on the roads and yes, even at the entrance to the church. America rolls on, bolstered by its best people, a string of essential workers unified not by their geography but by their decision to reject a choice that suggests they could live without one another, and knowing more and more that our nation relies on their labor.

Because the majority black and brown people in the inner city often vote differently than the majority white people in rural America, they're too often understood as diametrically opposed to one another, when I would argue that instead they have much more in common than we've previously understood or imagined.

We ignore the stories that don't fit our preconceived political narrative: red is rural and white, blue is urban and black and brown. This broad dichotomy erases the real stories of hope in rural America, the people of color who are changing rural America, and the partnerships that blur racial lines in the inner city. Telling these shared stories of hope could mean new compassion, understanding, and alliance - and a move forward out of American stalemate and political division. Communities are more than their political color on a map.

Meanwhile, there in the inner city, and out here, people just keep working and living.

There is a hopefulness and a tenacity hard to quantify in that decision, but today, as coronavirus cases reach their highest number yet again in America, the mutual reliance and love for one another I see here on the prairie gives me hope, and reminds me that the American story is still being written, even in the midst of pandemic.

When we emerge, shaken and beaten and wounded from this virus, it's these voices, from the blue skies and green fields of the prairie and the hot pavement and front porches of the inner city, that will remind us how to live together again.