This is the way the world ends.

The ending words of this poem, The Hollow Men, from T.S. Eliot, drifted into my consciousness early Sunday morning as I prepared to go to church and livestream a service from an empty sanctuary.

The poem records an empty synaptic space, a space where we're paralyzed between stimulus and response, uncertain of how to react in a world-changing moment.

I've been reading about the lack of shared grief, of empathy, at a time when the coronavirus has taken nearly 100,000 American lives.

You want to scream but nothing comes out. You drink your coffee, then your wine. You stare into the screen.

In case death had not come near enough, in case evil had not made its dark power visible enough -- yesterday, about 20 blocks from my house, a black man named George Floyd was killed by a white Minneapolis police officer, who knelt on his neck until he collapsed. Millions watch him die via viral video.

Ferguson seems eons ago now, but it was only six years ago that Michael Brown was killed by Darren Wilson in a suburb of St. Louis, igniting the Black Lives Matter movement and sparking a national conversation about police violence.

Sadly, the lives we lost always seemed to move to the back burner in a political battle about which America would prevail: black or white, wrapped in a flag or a t-shirt screaming: RESIST.

But is saving lives Democratic or Republican?

Then came the 2016 Presidential Election, and a year later, the kneeling protest of NFL quarterback Colin Kaepernick. Kaepernick wanted to protest police violence, and he did it in a way that couldn't be ignored, on national television watched by millions of Americans during the national anthem prior to NFL games.

But the news cycle is so frenzied, and American propensity so high to distrust traditional news media and instead fall victim to conspiracy theories spouted by alternative websites and videos, that instead we made it about honoring the military.

His America was an aspiration, a dream never fully realized, nascent in the words of Abraham Lincoln or Martin Luther King, Jr., or Sojourner Truth, or Malcolm X, or James Baldwin, or Ta-Nehisi Coates.

This America was strong enough to withstand the truth: that its justice had always been weakened by privilege and power. That skin color and ethnicity and religion and gender had always complicated so-called equal rights. That justice was never "for all," and our nation was never "indivisible" but instead divided, always, imperfectly, with unequal rights for all.

American injustice has always been starkest for those with brown and black skin, the descendants of those whom we brought here against their will and forced to wear shackles. In Northern states like mine, we've papered over our racism by preaching a social gospel, by pandering and tokenism, and by suggesting that economic justice is racial justice: by assuming every person with brown or black skin is impoverished and in need of our help, so that we can voice support for the African American Community and for equal rights, and scorn the Klan in the South, but refuse to integrate our schools or our neighborhoods. I live in the whitest and wealthiest corner of Minneapolis. It's no accident, shrouded as we are in liberalism and progressive politics.

Does it matter what I say or what I think: 20 blocks away? Ensconced in my fenced backyard?

Does it matter that Justine Damond, a white woman, was killed here three summers ago by the police, this time by an officer who happened to have brown skin? Or that he alone was convicted?

Today I'm embarrassed, selfish in my reaction. Why my city? Why couldn't that officer just move his knee? Why did he have to watch him die? Why?

As if removing his knee just seconds earlier, preventing a national outcry, would change anything. George Floyd was a man not a martyr, but perhaps he becomes one, an unassailable statistic for the cause of the sanctity of life.

In all our arguing, our policies, our politics, it has come to this: a simple question about the preservation of life and the dehumanization of our fellow Americans.

What is a life worth?

For Americans of faith, particularly those of Christian faith, the answer to this question should be obvious. God prioritizes individual life above all else, resurrecting the life of a convicted criminal who was sentenced to death on a Cross. America was supposed to be a triumph of the rights of the individual. Our military prides itself on searching for any one soldier who is lost, because each individual life lost matters.

COVID and George Floyd, and Trayvon Martin and Mike Brown and Sandra Bland and Philando Castile and too many beyond them, shake our faith in the answer to this question.

I don't want to look these truths in the eye. I'd rather just silently scream and drink my wine and wish that Officer Chauvin would have moved, before it was too late.

The myth of our America is fading from view. This realization is sweeping across America, and instead of trying to stop and go back, to a world that served our fellow Americans unfairly and unjustly and killed them and imprisoned them - instead it is time to go forward. To let go of the American myth that is suffocating and killing us, from COVID or depression or heart disease or suicide or police violence or overdose - and embrace the truth of an imperfect America that can only be rebuilt on the ashes, not the relics, of the past.

Today, may our whimper give way to action and compassion, for a new world and a new America. 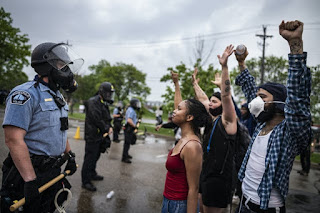