Finding Meaning in a Pandemic

As a pastor and a writer, I find that much of the significant work I do involves the somewhat muddy mush of meaning-making. No, everything does not happen for a reason, but nonetheless I am soothed by the idea that there is eternal meaning in our everyday.

I searched for meaning in 2018 when I traveled across America, meeting everyday Christians and Americans and conservatives to unpack the theology behind the Christian Trump vote in the 2016 Election.

Meaning was easy to find when I was on the go, meeting new people all the time and being invited into their stories: from the Lebanese-American drummer in Houston, to the pastor couple in Appalachia who became quick friends over Eat n' Park dinner at the northern edge of Appalachia in Altoona, Pa.

Meaning for me comes in bursts of activity and conversation, interspersed with long periods of quiet, when I can write down what they tell me, pray over it, and figure out how their stories jibe with a global - and perhaps Godly - narrative.

I've been making meaning in this way most of my adult life, from reporting on sports in the hockey locker room and at the Super Bowl in South Florida, to visiting elderly church members on hospice in Orange County, Calif.

My life's meaning had settled a bit just weeks before America went into quarantine in mid-March. My first book had come out in August, and I'd been traveling the country from late 2019 to early 2020, speaking to college students in Missouri, Arkansas, and North Carolina, and ministry candidates in Indiana, and churches and readers and bookstores and libraries from small-town Wisconsin to New York City. I was steadied in this meaning-making in early December, beginning a new part-time pastoral call at a rural church west of the Twin Cities, full of energetic kids and adults with myriad gifts for ministry and excitement about the future. And free eggs for the pastor.

We started to pay off some debt and find meaning in increasing age. I turned 35 on March 25, still hopeful that maybe somehow we'd still get Easter as a church, finishing up my final week teaching a webinar from home.

In the early days of Covid-19, the meaning-makers, myself among them, were quick to talk about the successful pivot into virtual ministry, and family togetherness, and even figuring out how to teach kids at home.

We read poems about Pandemic and dreamt that among us would be Shakespeare penning King Lear while quarantined for the plague, supposedly.

A month later -- we are still here. And making meaning feels more challenging. There are fewer new people to meet. I've done a few phone interviews for an upcoming magazine article I'm writing, and I've conducted pastoral care grief meetings with families over Zoom. The Spirit is reaching over airwaves and broadband connections, and the silent spaces in conversations are warmed by our mutual presence, a virtual hug, room to grieve and be together.

Still, we sit separated by the space between. The sound of boys wrestling and throwing balls and racing toy cars breaks up the silent spaces where I once made meaning - connecting our individual stories into some kind of larger narrative that made a bit of sense.

Coronavirus resists being packaged into a plot. My state was doing OK, especially in rural counties, and then we saw outbreaks in meat processing plants. Factories and grocery stores and UPS were essential, but what about life? It was only worrisome to elderly people, and then young people started succumbing to abrupt and unexpected deadly strokes.

Sunday morning online was no longer novel but routine, a prayer list caught in flux. Jesus had risen but our altars were stuck where we'd left them, in Lent. Purposeful suffering for the sake of another had long been deemed appropriate, but this suffering was not the same as stepping in the line of a bullet or dying on a cross. Instead it was prolonged and uncertain, for the sake often of strangers, and in many cases we only read about the ones we didn't save.

Our heroes had to wear masks and hide their own suffering, in a dark room at the end of a long day. Children alternately thrived and collapsed. They loved sleeping in and playing all day. They missed their friends and the structure of school. They worried about worries children couldn't comprehend, because adults, even the most brilliant among us, couldn't quite quantify the worry, either. The wisest were distinguished by their ability to admit the limits of their knowledge.

We wandered, aimlessly, from bathroom to bedroom to deck to refrigerator to kitchen cabinet to refrigerator to freezer to garbage to bathroom. We wrung our hands over our inability to save the ones we love, to protect the vulnerable, or even to make meaning or purpose out of any of it at all. That seemed indulgent. We had mounting bills to pay and dinners to make.

In a fit of anxiety-inspired cleaning frenzy, I tackled the closet in my boys' room the other night, cleaning out piles of clothes and dust bunnies and spider webs and dinosaurs and legos.

We stuffed into piles and trash bags for Goodwill and Once Upon a Child and to save for the 4-year-old when he gets older. On newly sparse hangers, just a few shirts remained - many of them out-of-season.

This morning, on a 60-degree day at the end of April, my 4-year-old stood on a stool at the edge of his closet and boldly declared, "I'm gonna be the littlest reindeer!" 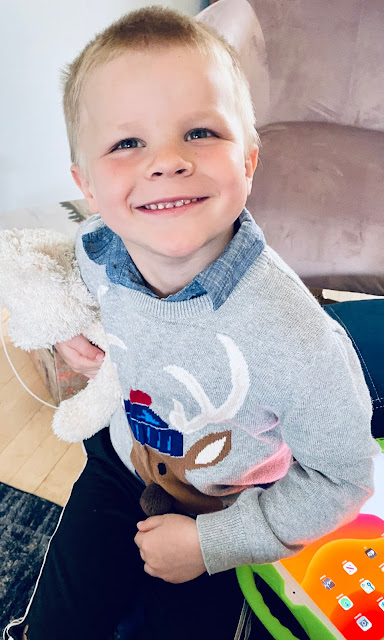 With the flick of the wrist of the finest New York City stylist, he slid the reindeer sweater with chambray collar off the neon-colored hanger and jammed it over his head.

He shook my arm, and I undid the top button and then he slid in his arms and beamed, pairing the dressy sweater with holey black sweatpants and gray and black socks.

It was the wrong outfit for today. The wrong time. The wrong pairing. He'd be hot and sweaty and uncomfortable, and he'd look slightly ridiculous.

Magic doesn't make any sense. Neither does a reindeer sweater in April. Or a fairy who leaves money under your pillow. Or faith in the midst of a pandemic the robs us of liberty and life and hubris with each blow of its staggering wind across the world's most powerful country and most formidable economy.

I cannot make meaning of the last couple of months, of the senseless deaths and unfairness and glaring sin, structural and personal. I cannot make sense of it, anymore than I can make sense of the cousin who died too young, the car accident that stole a mother's youngest son, the cancer that appeared without warning, the job that was lost and the family whose home was destroyed by wildfire and the friend who died of an overdose and the baby who was never born.

Much as I love to write and read and speak and make meaning, I am reminded today that only God makes meaning of the grand narrative of the world, its sin and its love and its failure and its enduring hope. God's narrative is shaped by a grace I can only glimpse but never fully give, trapped inside of my pride and dash to anger, heedless in my righteous zeal.

I can make meaning of today. Today a 4-year-old who has barely left his house in weeks still believed in the magic of love. Today, the reindeer sweater was enough.