The most frustrating response I get when telling people about my book, Red State Christians, is this all-too-common one.

"We shouldn't talk about politics in church."

Let me say, first off, that I get it. My husband tends to turn on cable news before we go to bed at night, and I feel my anxiety rising and my frustration peaking a few minutes in, before we decide we have to shut it off.

There's also a feeling of inertia, of deja vu, a lack of surprises and a tendency to sensationalize any story that comes along with most news stories today.

Still, cable news doesn't make up the sum of American politics. Neither does Twitter, contrary to popular belief. And there are some reporters telling good stories, each and every day - outside the glare of cable news cameras and punditry's requirements for outrage.

The thing is, politics began in Ancient Greece as a sort of dream of a marketplace of ideas, where citizens could share their thoughts with one another and vote to make a greater good and a deeper understanding. No, it wasn't perfect. The Greeks used slave labor and had racist and patriarchal ideas about what really makes a citizen.

Nonetheless, politics began with the opinions and thoughts and discussions of the people, at least some of them.

Often, I find when people say something is "political," for whatever reason, it's a euphemism for saying something is too "liberal." I'm not sure why; I've just never heard someone who is sharing conservative ideas be called too "political."

I've challenged myself to start asking people what they mean when they say something is too "political."

Because most of the time I don't really know what it means. Our lives are political lives, in the sense that we are negotiating life in a society full of individuals with competing wants, needs, values and resources.

A political agenda seems to be one that is by its very nature competitive and lacking empathy, which isn't a good thing. But that's not what my book is about at all - except to the extent it is about us as Americans, negotiating an economic system based on capital and scarcity, and trying to figure out how to live together without killing each other, in a variety of ways.

Maybe when people say something is political, they mean that it too controversial. After all, you aren't supposed to discuss politics or religion in polite conversation, which sometimes makes it hard for me to make friends with other parents at Jacob's school after they ask me about my book (this rule also makes it hard to really be "evangelical," which requires you to share your faith often).

Still, talking about politics and religion can make us uncomfortable. But our silence often covers up deeply held feelings and beliefs. If we don't share those deeply held beliefs with others we don't know or who don't agree with us, we'll never understand each other.

That makes me sad.

And so much of this makes me tired.

I've fought from every which way to make sure that Red State Christians is not a partisan book - that my book and speaking events are for people on every end of the political spectrum - and that every person in the book is seen as a complete human being, created in the image of God - just as every person who wants to discuss the book at an event is afforded the same respect and grace that God promises to give us in the life, death and resurrection of Jesus.

Still, there's fear and trepidation about sharing our most deeply held beliefs. Fear that our churches might shrink, or that people might disagree, or that people will get angry.

I get those fears.

But there's something else that scares me more. And that's if we don't share the very real political witness of Jesus, who welcomed the stranger, who liberated the prisoner, who never hesitated to critique the religious and political hierarchy of his day, so much so that his government executed him by the wishes of the religious hierarchy. How can we worship this Savior and yet fail to have our churches be a place where political dialogue grounded in Scripture is practiced in grace, faithfulness and love?

In class at Luther Seminary, studying to be a pastor, I often walked in late, wearing a green sweatshirt my dad found years before in the lost-and-found, sweatpants, and black rubber boots. I had always done all the required reading, but I sat in the back. I preferred to listen, to remain quiet.

Sometimes, though, a feeling rose up within me. I felt at that moment a surge as though I had to speak, as though God was compelling me to share this witness, through the power of a Holy Spirit who intercedes whenever we do not know what to say.

In those moments I knew that God would occasionally call me to speak when I would rather remain quiet.

So I strive - today and each day - to be never partisan but unafraid to be political. To be unafraid in critiquing the political choices championed by many who would call themselves Christians, choices that penalize the vulnerable and empower the abuser.

To be unafraid to dig deep into what it means for us to really, truly be Pro-Life.

To be unafraid to wonder if a President who claims to speak for Christians is instead a political savior attempting to supplant a Savior who already came, who told his fellow Jews that their dreams of making their country prosperous and great again were not ones that would be fulfilled by the God of the Bible.

I speak these words and often I am unafraid, because I speak to people across America who also want to tell their own political truths to one another, truths that cross partisan lines and reveal a populace who is loving but also afraid, battle-weary, hopeless, and tired of corrupt politicians.

Sometimes, though, I am tired. When even Christian media must silo itself to the left or the right. When people make assumptions about me or about my loved ones because of one thing we say. When liberal becomes an epithet, just as racist has become an epithet.

It would be easier to move my camp entirely to the left or to the right, or to refrain entirely from every speaking about politics - though this would be entirely unfaithful to a Bible that entrenches itself in political and national life, from the Hebrew Bible story of Israel to the early Christians' persecution at the hands of the Romans.

Instead I stubbornly refuse to believe that a message of Jesus has to be codified in partisan language, has to be held captive to our limited, American understanding of the world.

I stubbornly refuse to believe that churches can't be places where political healing begins.

So maybe my book is political. Maybe I'm being political.

All I want to be is who God is calling me to be. 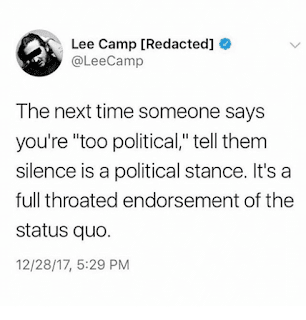