3 Ways the Church can separate National Pride and Christian Identity

This piece will also be shared at The Art of Taleh, a wonderful home for Biblical and historical analysis that remains relevant and accessible, curated by Pastor Aaron and Dr. Michelle Reyes. The Reyes' currently live and pastor in Austin, Texas, but Michelle is a fellow native Minnesotan and a new friend of mine through a special network of women Christian writers and thinkers. I encourage you to check out their site -- it's a tremendous resource, and I'm honored to be included! 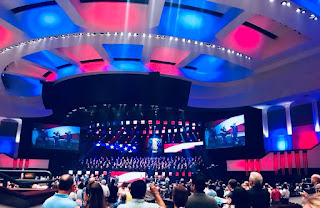 Fourth of July weekend worship in 2018 at Prestonwood Baptist in Plano, TX

A few weeks ago, Dr. Michelle Reyes asked me to contribute a post to her and her pastor husband's blog site, The Art of Taleh - discussing practical ways the Church can help people begin to separate national pride and Christian identity. Michelle has a Ph.D. in German and has taught at elite Christian universities, before planting a church with her husband, Aaron, in Austin, Texas, where they currently live.

While Michelle and I share a hometown in common, we've also spent time at opposite ends of the Christian political spectrum, me attending a mainline Lutheran seminary and serving a left-leaning denomination, while she studied at Evangelical Harvard (Wheaton College) and formerly taught at Chicago's right-leaning Moody Bible Institute.

Still, as many of us find when we open our hearts to new friends and relationships - what separates Michelle and I is much smaller than what we share in common. We are both young(ish!) wives and mothers; we are both passionate about our Christian faith and making it accessible and relevant to people in our generation. We are also both worried about the encroachment of nationalism into American churches. But rather than another think piece about the horrifying ways everybody else (read: not ourselves) is destroying the church, what Michelle suggested I do in this article is give churches and church leaders a few concrete ways to help churches separate national pride and Christian identity. In taking some of these small steps, our hope is that American churches can point again strongly to the Gospel of Jesus, a humble and loving Savior, who saved people and not nations.

STEP ONE: Have a congregation-wide conversation about the place of the American flag in the worship space and what to do with patriotic holidays in worship.

When I served as intern pastor of a large Lutheran/Evangelical church in Las Vegas, one of the most contentious weekends I had there was over Fourth of July weekend, when the two other pastors were out of town. Our worship director and I arrived that weekend for Saturday night worship to find our entire sanctuary transformed into an homage to America. The ceiling was festooned with red, white and blue bunting, and - true to Vegas tradition - the decorations were gaudy and over-the-top. We decided together to take down some of the decorations. Not all.

We later found out that some members of the congregation took our actions extremely personally. They associated Fourth of July with a global celebration of the kind of freedom that Christians are offered through the forgiveness of Jesus. After the fact, we had some conversations together to understand one another's points of view. But I believe now that our experience would have been more fruitful had we been purposeful about hosting congregational conversations about what it means to display American flags and patriotic decorations in a Christian worship space.

By hosting these kinds of conversations, and lifting up Bible passages like Romans 13 (where Paul suggests Christians should submit to the government) in conversation with Bible passages like Matthew 21, (where Jesus overturns the tables of the money changers in the Temple), and the First Commandment, (where God insists that its idolatrous to worship anything other than God, Godself) - congregations and church leaders can find out each other's points of views in a space that prioritizes empathetic listening and engagement with the Bible.

I suggest that pastors and church leaders moderate this conversation, while allowing people to break into small groups for smaller conversations.

These conversations aren't always easy to have, but they open conversation in a way that feels less threatening than unilateral decisions about where the flag should go, and how much decoration should be done for Fourth of July.

STEP TWO: Regularly talk about current events in church: at adult education, in Sunday school, and at worship

Pastors and church leaders should be well-read on current events, even if sometimes it can seem stressful or like an onslaught of bad news. Pastors and church leaders should also be attentive to read news sources that strive for balance and non-partisanship, and make sure they're reading news from a variety of political viewpoints. I also suggest reading local news and being careful about articles posted on social media.

When pastors and church leaders are well-versed in current events, they're constantly weighing what Jesus would do in modern-day situations, and what the Bible tells us about the Church's response to current events. If current events are mentioned often in preaching and teaching, the mentions won't seem so jarring to church members - and church members will also realize that their Christian faith requires them to evaluate their government and political leaders, not merely follow them without question.

It's also important for church leaders to focus on remaining politically aware but not partisan, and seek to share political messages in ways that they can be heard by both sides of the aisle. This is often accomplished by asking questions and using explicit references to Bible passages.

Most American Christians know that Jesus is not American -- but sometimes our faith functions as though he was. Helping to separate national pride and Christian identity relies upon a deep understanding of Jesus' story and life here on earth. Knowing that Jesus was a dark-skinned Middle Easterner, a person born in a backwater rural area (Galilee), and child born under risk of persecution from the state who had to flee with his parents to another nation (Egypt) - can inform our understanding of current events and immigration law. American Christians who believe we face persecution because people say "Happy Holidays," can learn about the very real persecution and death faced by early Christians at the hands of the Roman Empire, and European-centric Christians would do well to remember that we worship a faith rooted in the Middle East. Also helpful in this area is helping to connect white American Christians to Christians from the Middle East, who understand Christian history and persecution in a way that often runs far deeper than we can understand it as Americans.

LAST POINT: You might notice a common thread in each of these three steps. They all require having uncomfortable conversations and deep engagement with the Bible and the life of Jesus. I would argue that our churches should be doing these things anyway, so these steps naturally lead not only to a greater separation between national pride and Christian identity -- they also help us to be stronger in our Christian faith and identity.

It's not easy to have conversations where people disagree vehemently. It's not easy to challenge peoples' identity and understanding of Christianity as a primarily American faith. But doing so is worthwhile to put the focus in churches back where it should be, on following Jesus and loving God and one another.