I just got back Sunday from my first official Red State Christians book event, and it was everything I'd imagined and more.

I drove about 4 and a half hours last Thursday to the Wisconsin Northwoods: Eagle River, to be exact, and I spent the next four days in intense conversation about my book, politics, Christianity, rural culture - and people's hopes and dreams for their lives and for America.

It was simply an awesome time, and a fitting beginning to a book that I hope will encourage people all over America to engage in conversation again with their neighbors.

One of the best parts about the trip was driving up to the area library for my evening event. Summer Fridays in the Northwoods are busy with fishing, barbecues, fish frys, and, of course, beer drinking. I wasn't sure if anyone would come. I prepared myself for a low turnout.

Instead, when I arrived half an hour early for my event, some people were already there and sitting in their seats! We ended up needing to use every chair the library had, and I was encouraged to hear questions from people of varied political and socioeconomic backgrounds.

Something similar happened on Sunday morning, when I got to share the sermon at Prince of Peace Lutheran Church and host a forum afterwards. More than 100 people attended, a huge turnout for a small-town summer Sunday, and again I had to adjust my planned program, as I'd planned a forum for more like 10-15 people sitting around a table!

All this to say, I really enjoy getting to talk about my research and Red State Christians with all kinds of people, and I love taking questions and addressing even tough questions that are sometimes contentious.

There's one question that I've gotten a few times in the process of writing and promoting Red State Questions the makes my blood boil. I have this internal reaction to the question of annoyance and frustration, and until recently I haven't been able to figure out why it bothers me so much.

When are you writing the book Blue State Christians?

This question, and its derivations: like "What about blue state Christians?" or "Why are you only researching red state Christians?" has always produced this response in me, from early in my research to last weekend - and I think I finally figured out why the question itself strikes a nerve in me.

Until recently, I'd been talking about the 87 percent of white Evangelicals who voted for Trump, and the sheer numerical difference between conservative and liberal Christians, which means that obviously the larger number and electoral consequence meant that red state Christians merited a book more than blue state Christians did.

But that's not what galls me about the question itself.

The thing that bugs me is this: the assumption that if you are not a red state Christian, you are a blue state Christian - and that Christians are only to be defined by their partisan leanings.

Maybe I'm critiquing my own title here, but the fact is it bothers me that there is such a thing as "red state Christians," at all. I think it's a net negative for America that religion has become coopted by partisanship. I don't think the answer to saving the Gospel lies in meeting Republican Christianity with Democratic Christianity.

As I told a documentary filmmaker a couple of weeks ago, who was working on a project about progressive Evangelicals: "Christians need to remember that salvation doesn't lie in the Democratic Party, either."

I'm glad that South Bend Mayor Pete Buttigieg is quoting Scripture in Democratic Presidential debates, but I'm suspicious of people who latch onto his rhetoric as a new tide in American Christianity: a progressive or blue wave.

All of my research and work into studying Red State Christians and the consequent peril of Christian Nationalism will be for naught if all it does is swing the pendulum the other direction, so that then Blue State Christians own religious rhetoric in America.

All of my warnings about Christian Nationalism and critiques of civil religion are just as valid on the left as they are on the right; so far the right has just been immensely more successful in making Christianity partisan.

On Nov. 9, 2016, in the aftermath of Donald Trump's victory, one of the lessons that to me seemed most poignant was a reminder to Democratic Christians that salvation lies not in government - and that Christians must always maintain independence from political parties.

The Christian Gospel is necessarily a Gospel preached from the outside, as a resistance movement to the wealth, power and self-centeredness that plague American governance. As such, Christians cannot be coopted by Democrats anymore than they should be coopted by Republicans - even as Christians do find resonance in Democratic critiques of wealth in government, like those made by Elizabeth Warren and Bernie Sanders in the debate last night.

What I'm trying to say is, please don't assume that if I critique Red State Christians I must necessarily be a Blue State Christian. For one, the old political labels of Democrat or Republican, red or blue, conservative or liberal, are becoming increasingly muddied and outdated post-Obama, beginning with the ways Trump transformed the face of the Republican Party.

And no, I won't be writing next about Blue State Christians -- or if I do -- it'll be, like Red State Christians, both an explainer, an empathizer, but also a critique of a Gospel that cannot be contained in a political party, be it liberal or conservative. 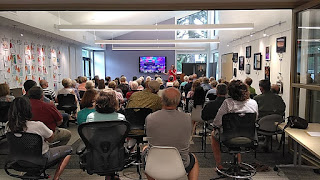