I want to tell you a story about humility, and about purpose and prophecy, and about America.

It begins in December 2014, though truthfully it started several months earlier, in February 2014, sitting in a tiny pastor's office in a tiny church outside Chicago.

Snow fell furiously outside, and I turned around to watch it drift, as I watched a gaggle of people walk past my door, at the end of the twice-daily 12-step meeting hosted in my tiny little Lutheran church.

Sometimes in 2014 I felt uncertain and isolated. I had only a few months ago become a pastor; somewhere inside I was still the journalist I had been before, with the soul of a writer longing to tell the truth. My congregation could not contain the breadth of my desire to communicate, so, at my husband's urging, I started a blog.

On the advice of a former intern to a prominent Christian writer, who went to the same journalism school as me, I contacted a group called Red Letter Christians. They'd be among the first to publish my Christian writing and blogging, and they even invited me to a small gathering of activists, authors and pastors on the East Coast in 2014.

Wide-eyed and naive, I listened as these veterans of publishing and speaking circuits shared their wisdom and their woes. Introverted, and missing my 18-month-old back home, having just weeks before suffered a miscarriage, I walked in to eat breakfast alone.

I didn't really know anyone; I wasn't in the "club," so to speak, and I wasn't sure I even wanted to be. So I put my head down, and stared into my coffee cup. Behind me I heard another person sidling up to the breakfast buffet. He walked slowly, haltingly, slightly bent over. I didn't know then, but he'd dealt with bone-fusion arthritic disability much of his life. Like the Apostle Paul, he had a thorn in his flesh (2 Corinthians 12:7). Like the Apostle Paul, God's power would be made perfect despite this weakness, which was not in truth weakness but strength (2 Corinthians 12:9).

I didn't know any of this, then. I just saw a man I didn't know, a man whose skin color was different than mine. I wondered if he was with our Christian group, but I didn't ask. I just kept sitting, drinking my coffee, self-obsessed with my own inadequacies and social anxieties and love for my son, who was back in Chicago.

Later that day, we gathered to hear a special speaker. In the silence of a nondescript room in the basement, slowly, purposefully, my breakfast partner walked in. We had been alone in that breakfast room for several minutes, me and the prophet.

Years later, that list would include speaker at the 2016 Democratic National Convention (though he calls himself a biblicist and a conservative when it comes to Scripture), author, arrestee, criminal, Poor Peoples' Campaign leader, MacArthur Fellow.

The Rev. Dr. William J Barber, II, spoke that day in 2014 as I would see him speak years later on national television, and again this week at the Festival of Homiletics in Minneapolis. He often started quietly, using charts, images, graphs, and even videos to enhance his message. He was tethered, absolutely, to the Bible passages that guided his walk, and, unique among speakers today, you rarely heard him talk about himself. He used lists of facts and figures and historical data, pausing occasionally to breathe and to stay resolutely dedicated to his central message, that voter suppression, particularly across the American South and in conservative states, was undermining American democracy, and that this same voter suppression had its roots in the 1930s New Deal and racism borne in Reconstruction, all the way up through Nixon's Southern Strategy and Trump's politics of fear and resentment.

Barber showed how it all - how we all - are connected, and connected inherently both to sin and to God. He talked about the insidious ways powerful people take advantage of racial - and gender and sexual identity - discrimination to incite unfairness and entrench many, especially the poor, in systems of injustice. He said that when politicians campaigned on racial resentment, their words hurt African Americans but their laws mainly hurt poor whites. He challenged the church for providing cover for sin, for being too afraid or too complicit or too disorganized or too self-involved to speak out.

Listening, I felt not judged but incited to action. Occasionally he'd laugh, and you'd see behind the moral fervor and God-given prophecy into the man, who in 2016 would be harassed on a plane for his disability and likely his skin color, and later forced to leave. 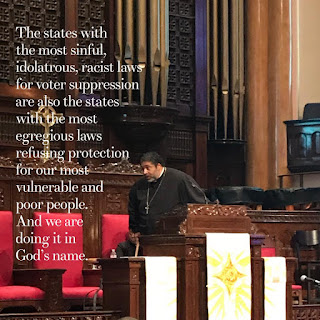 He handled it all with an unspeakable sort of dignity rarely seen anymore, and as I listened to him speak in 2014, I felt transported to another place, another space. I'd return to Chicago determined to involve my little tiny struggling white church in racial reconciliation. We'd cross the segregation lines of Chicago to partner with a dynamic black Lutheran church on the Far South Side. We'd trade worship leadership and trade pulpits. We'd really know each other; we'd open our hearts to listen.

Miraculously, months later, this work began to happen. Barber's words echoed in my heart. But I'd end up leaving Chicago in June 2015 to work in Orange County and give birth to my second son. My blogging ministry ground to a slow halt. I'd rejoin the Red Letter gathering in 2016, but it was not until moving to Minneapolis in 2017 when I would begin anew my ministry of words.

While I mothered and soaked up the sun and ministered in Southern California, Barber had been traveling the country as a man on a mission, sent straight from God. He continued his battle in North Carolina, winning victories as a restrictive voting law that predominately affected African American voters was struck down by the U.S. Court of Appeals on July 29, 2016, and people around the country vowed to join efforts against voter suppression.

Even as Barber spoke at the 2016 DNC, I noticed the ways he didn't fit there. He gripped the lectern as he spoke, a speech not intensely political or even partisan but instead insistently biblical, a voice descended from another realm unpolluted by the trappings of lobbyists, partisanship and fame.

He came almost from another era yet was grounded in the situation of 21st Century America, his eyes clearly open to American wounds, long unhealed, yet within him a reservoir of untapped hope, a deep pool of resilience founded in the words of the spirituals he knew by heart and would sing in the midst of a protest, his eyes lifted heavenward.

When I saw Barber again this year, 2019, in Minneapolis, months before publication of my book, Red State Christians, and mired in a quest for political and religious national understanding and resolution myself, I again felt deeply ashamed. I had sat for breakfast with this giant of a man and I had said nothing; I had failed to discern the presence of a prophet in my midst because I made the mistake so many of us do, that my earthly sense of deduction would comprehend a heavenly messenger.

I listened to him speak to this room of mostly white, mostly Midwestern, mostly mainline pastors. He said he wanted to deal with weightier matters, the ones Jesus tells the Pharisees they overlooked, and none of us wants to be a Pharisee, though they often make their home in the church.

Barber refused to give in to the liberal temptation of referencing Trump, directly or obliquely, preferring to focus instead on the American roots of the division at hand today between black and white, rich and poor, man and woman, gay and straight.

"Only deeply committed moral fusion movements deeply rooted in our religious institutions have brought justice," he said, rebuking those of us who had clung to the Mueller Report as a sort of savior.

"America has always had great difficulty with a kind of social schizophrenia saying one thing on paper and struggling to live up to it," he said.

"It's sick sociology, bad biology ... heretical ontology, that God designed it this way," Barber said of racism. "It's where people put their ultimate hope ... one of the biggest problems in the church is we want to address cultural racism but not systemic racism."

He closed with a drumbeat, a synthesis and a call to action: repenting of the sin of racist idolatrous voter suppression - and speaking against it.

He paraphrased Matthew 23: "Woe unto those who legislate evil and rob the poor of their rights... We can break the demonic hold of systemic idolatrous sinful racist voter suppression, and in doing so we will all be set free."

The crowd, stunned, paused a movement when he finished, then one by one we rose to our feet. The standing ovation felt like one of a people called not to applaud but to take action, a crowd of people who had heard the word of the Lord and stood up in its midst.

As we sat back down, Barber walked slowly down the stairs and out the door toward the airport. I tripped over the seats, rushing toward the door, rushing to catch a word with him before he left. I didn't want to miss speaking with him this time, five years later, as I saw who he was and repented of my own blindness in the face of the word of the Lord.