#GOT: The Wights of our World

WARNING: This article may contain spoilers.

I resisted watching Game of Thrones for years. My husband, Ben, told me it was good, and I had to see it, but I don't like fantasy shows. I kept thinking about the one time he convinced me to watch The Walking Dead, and I kept seeing visions of zombies and remembering how I wished I had that hour of my life back.

Still, I gave in during Summer 2017, and soon I was captivated. It wasn't fantasy, exactly, because Game of Thrones, in its elegant scenes of ocean and land, of mountaintop and gritty castle, told me something more about "real life," than my favored reality TV shows I'd watched for years. Yes, I will admit, my usual TV fare consists of Real Housewives and Teen Mom.

I loved watching Daenerys rise from cursed female descendant of a Mad King to become the Dragon Queen, breaker of chains, and I drew inspiration from her partnership with the eloquent and wise Missandei. All the women of Game of Thrones were complex and deep, shattering stereotypes of witch or mother or sex object, though HBO couldn't quite do away with objectification of the female body. I'll take what progress I can get.

My favorite character, right from the start, was Arya, the youngest daughter of the Lord of Winterfell, Ned Stark. Like most of us do, I chose a hero who reminded me of myself. Shunning the dresses and meek conduct expected of a royal daughter, Arya snuck out to practice shooting arrows. She only had one to use, so again and again she shot at her target, her father surreptitiously watching and applauding. 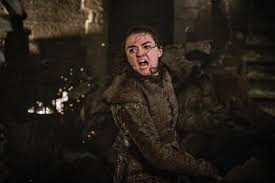 I had once been that girl, not quite fitting in, bringing a baseball glove and cap to school, tossing it against the wall when no one wanted to play catch with me. Ultimately, I practiced for myself, that I might grow better and stronger, knowing somewhere inside that the fortitude which strengthened me on the school playground would be the same fortitude I needed as a mother, a wife, as a woman in a man's world, as a daughter, as a writer, as a pastor.

So of course I cheered in Season 8, Episode 3 last week - when Arya's strength and moxie, with an assist from the Priestess of the Lord of Light, gave her the strength and power to be hero of the Living.

I watched something else, though, as the Living battled the Dead on the longest, coldest night in Winterfell. What I saw told me something troubling, yet true, about our very real world. 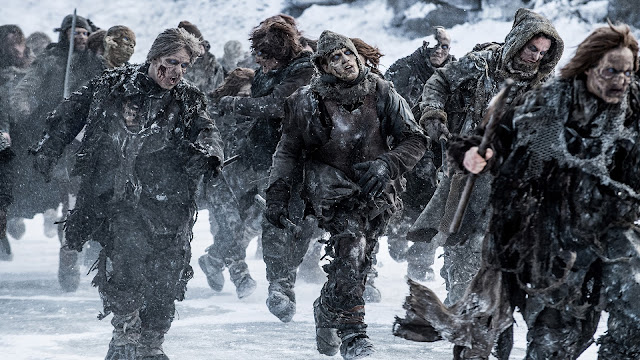 If you aren't a Game of Thrones watcher, stick with me here, because I'll explain. Wights are the name for the Army of the Dead, made up of people, and maybe a dragon or giant or two, who have previously died, often in battle. To make his Army, the Night King's greatest gift is bringing dead bodies back to life - a horrific mirror image of the greatest gift of the Christian Savior Jesus, who promises eternal life and resurrection of the body and life ever after.

The Wights' return to life is anything but heavenly. Their reanimated bodies and faces are twisted and grotesque, almost Dickensian, lurching from side to side with bloodshot, beady eyes and mouths permanently fixed in a grimace. While alive in a sense, they have become bloodthirsty cartoons of their former selves, capable only of rushing forward mindlessly and killing, tearing apart anyone who comes across their path.

I know I would be a terrible soldier, because I would always want to talk with my enemy before killing him. The mindlessness of battle and of war has always tormented me, and while I believe in just war, to actually fight it against living, breathing humans has always required a certain shaking off of our common humanity, even in cause of a greater good, won by bloodshed and terror.

Game of Thrones illustrates this soul-shaking truth in a terrifying way, suggesting that death is not a lasting freedom or final redemption, rather only that our bodies might be burned or be otherwise resurrected into instruments of evil and death.

Game of Thrones brings to light our greatest and deepest fears about death, that our bodies, once dead, are monstrous and evil, revealing the basest human instincts to be mindless slaughter and manipulation of our fellow man.

I watched the wights climb over one another, desperate to enter Winterfell and continue their march of death, their ranks only swelled by more and more killing. They couldn't really speak, only shriek, and they were controlled by a leader whose only job was to kill and to resurrect death.

The Night King, the Antichrist, has the power to resurrect - but his resurrection is one that brings only misery. This death-bearing resurrection flies in the face of the hopefulness of Queen Daenerys, breaker of chains, and the power of love and reconciliation we see in Tyrion, Jamie, and Sansa.

When I watched the wights, I kept wondering Why? Why are these risen dead so desperate to kill, so bloodthirsty, so angry, so ruthless?

These who had once been mothers and fathers, sisters and brothers, were now reanimated as mindless killing machines.

Ben, frustrated with my pedantic questioning, responded only over and over: "He makes them do it."

Our world today is far from wights and Winterfell, despite this cold and gray Minnesota spring. We have families we love, most of the time; we desire peace and joy; we punish killing and killers; we believe, most of us, no matter our religious background, that death will lead to a blissful eternal life with a gracious God.

Still, the wights of Winterfell reveal something scary about our world. Their mindless slaughter, their bloodthirsty grimace, it reminds me of our mindless and murderous pursuit of wealth. Blind to the consequences to our earth or to our global siblings, many of us approach money as a band of wights encroaching upon Winterfell, crushing anything in our path, our thirst never satisfied, our desire for wealth never sated, we rest not until we have more and others have less.

Our society rewards most those who are most wight-like in their pursuit of wealth. Our generosity extends not to the teachers or the nurses or the parents but instead to those whose primary purpose exists in finding the greatest dividend to exploit a values-free market. In America we have elected a President who boasted of his immoral self-aggrandizement, manipulating tax law and public policy to enrich himself, bribing politicians so that his own empire would expand, masking purchases as charitable donations, bragging that because of his own blindness to any constraint on his pursuit of wealth, he would teach America to do the same, remaking her in his glittering image.

There was something attractive about this idea, of course. He was speaking truth about the vacuity of our economic and tax system, perfectly designed to maintain an American power structure built on an upper class and an underclass, elevating occasional select members of the underclass to positions of power, even though as exceptions they only proved the rule. We sold this as an American dream, hoping that an unfulfilled promise would be enough to keep the Army of the Living battling amongst ourselves.

In a return to the creed of Greed is Good, we find ourselves in the image of wights, in that our resurrection to a greater former day empowers us not to love and to be loved but only to march, blindly, toward vanquishment of any who would stand in our way and take our wealth.

The wights must do this, of course, because they have already died to their former lives. Our national and religious creeds are not yet dead, but they are threatened. The more we try to win at all costs; the more we deny the social costs of a monetary policy that encourages immorality and exploitation, we deny the promise of a resurrection not to pursuit of wealth and death but a resurrection to eternal love.

In the end, it was an embattled and perpetual misfit, a wandering girl who never quite fit in, who defeated the Night King and his soulless resurrection. I wonder, in an America where money is God, who might slay the Golden King, and who might free us from our eternal status as wights, marching mindlessly into our own and our world's destruction. 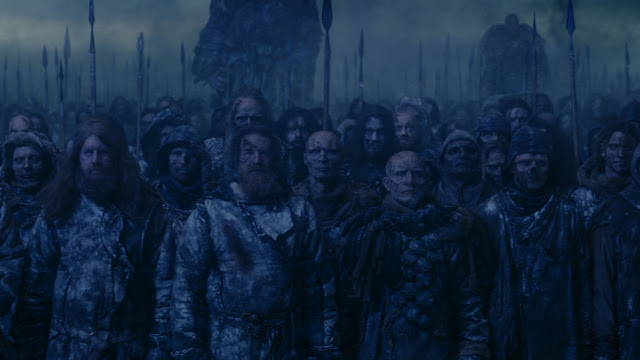