Lenten Discipline Week 5: Am I my brother's keeper?

Welcome to Week 5 of our shared Lenten Discipline, to meditate, reflect, and pray on one of the Old Testament Wednesday Bible texts. I will share a text, a brief reflection, discussion questions, and prayer. I invite you to use this brief study with family, friends, or even on your own.

This practice is my attempt to grow spiritually during this Lenten season, rather than giving up something. My hope is that it will draw me closer to God and bring me the clarity of purpose I need in this busy season. Thank you for joining me!

Gen. 44:1   Then he commanded the steward of his house, “Fill the men’s sacks with food, as much as they can carry, and put each man’s money in the top of his sack.  2 Put my cup, the silver cup, in the top of the sack of the youngest, with his money for the grain.” And he did as Joseph told him.  3 As soon as the morning was light, the men were sent away with their donkeys.  4 When they had gone only a short distance from the city, Joseph said to his steward, “Go, follow after the men; and when you overtake them, say to them, ‘Why have you returned evil for good? Why have you stolen my silver cup?  5 Is it not from this that my lord drinks? Does he not indeed use it for divination? You have done wrong in doing this.’”

Gen. 44:6   When he overtook them, he repeated these words to them.  7 They said to him, “Why does my lord speak such words as these? Far be it from your servants that they should do such a thing!  8 Look, the money that we found at the top of our sacks, we brought back to you from the land of Canaan; why then would we steal silver or gold from your lord’s house?  9 Should it be found with any one of your servants, let him die; moreover the rest of us will become my lord’s slaves.”  10 He said, “Even so; in accordance with your words, let it be: he with whom it is found shall become my slave, but the rest of you shall go free.”  11 Then each one quickly lowered his sack to the ground, and each opened his sack.  12 He searched, beginning with the eldest and ending with the youngest; and the cup was found in Benjamin’s sack.  13 At this they tore their clothes. Then each one loaded his donkey, and they returned to the city.

Gen. 44:14   Judah and his brothers came to Joseph’s house while he was still there; and they fell to the ground before him.  15 Joseph said to them, “What deed is this that you have done? Do you not know that one such as I can practice divination?”  16 And Judah said, “What can we say to my lord? What can we speak? How can we clear ourselves? God has found out the guilt of your servants; here we are then, my lord’s slaves, both we and also the one in whose possession the cup has been found.”  17 But he said, “Far be it from me that I should do so! Only the one in whose possession the cup was found shall be my slave; but as for you, go up in peace to your father.”

Gen. 44:18   Then Judah stepped up to him and said, “O my lord, let your servant please speak a word in my lord’s ears, and do not be angry with your servant; for you are like Pharaoh himself.

Gen. 44:32 For your servant became surety for the boy to my father, saying, ‘If I do not bring him back to you, then I will bear the blame in the sight of my father all my life.’  33 Now therefore, please let your servant remain as a slave to my lord in place of the boy; and let the boy go back with his brothers.  34 For how can I go back to my father if the boy is not with me? I fear to see the suffering that would come upon my father.”

Reflection: We return again to the story of Joseph, which makes up nearly a third of the entire book of Genesis, in which within us tells much about the story of God and God's people; foreshadowing even the coming of Jesus and God's transformation of death into life.

We're not there yet, though, are we? We are still walking through the sometimes murky season of Lent, where we are forced to see face-to-face God's insistence on drawing close to human suffering, God's insistence on confronting the reality of sin and betrayal, even though we don't want to see it, and also reminding us of the potential for transforming even our basest instincts into love.

No one comes out clean, entirely, in the story of Joseph. His father, Jacob, a patriarch and the chosen son of Isaac, is also a trickster and a father who shows favoritism among his children and his wives. Joseph himself taunts his brothers with the story of a dream, in which they all bow down to him, as he wears the fabulous coat his father gave only to him. And then, of course, is our reading last week: in which Joseph's older brothers sell their youngest sibling at the time into slavery.

My husband, Ben, is the youngest of three boys -- and he and his older brothers had their share of scuffles - but it wasn't quite that bad!

The Old Testament is important for us to read today because it refuses to be sanitized. It refuses to say that what the Bible is is a book of morality that shows us how we ought to live as perfect Christians. Wouldn't that be helpful sometimes? No, instead the Bible forces us to come face-to-face with the realities of human life, even drama and betrayal in our closest family relationships.

So we come to today's reading. Joseph has been living in prosperity in Egypt, managing to rise from an imprisoned slave to one of the most powerful advisors to Pharaoh. His tale covers the depths and heights of human experience, and it reminds us never to become too comfortable or distressed in our current situation.

In living in prosperity, and through dreams he received from God (never ignore God's voice in your own life!) Joseph managed to advise Pharaoh of the coming famine, and he advised the Egyptians to maintain storehouses of grain for the years ahead.

When the famine came, Joseph's family was suffering back in Canaan. They had to travel to Egypt to get food to eat, so they wouldn't starve. When they did so, they came face to face with their former brother -- but they didn't recognize him.

Here, we're reminded of this Biblical pattern of trickery, beginning with Joseph's father, Jacob. Joseph tricks his brothers, but his ultimate motive is a chance to see them again, and to be with his youngest brother Benjamin, the only brother to have the same mother as Joseph.

Joseph's ruse puts a valuable silver cup in his brother's bag. Why would he do this - instead of just telling his brothers he wanted to talk? Perhaps Joseph can relate to all of us in the difficulty of bringing up tough family situations. Maybe it's easier to manipulate the situation. Maybe Joseph is even a little passive aggressive.

Still, the Bible refuses to paint human beings and our relationships as either black or white; good or bad. In tricking his brothers, Joseph sees their compassion. Judah takes on the role of protective older brother, just as Reuben had before when the brothers contemplated killing Joseph.

Genesis seems to suggest that we are neither our best or worst versions of ourselves: we are an amalgam of competing desires, and with God's help, love and mercy wins out in the end. Judah's self-sacrifice is not only for his youngest brother; it's also for his father. The same family that once hurt each other also wants to sacrifice itself for each other out of love.

Sometimes it's hard to talk about the family and what an ideal family looks like anymore in the church. Too many people have been left out of past visions of "Christian families." The Bible has its own myriad of messed up family relationships. And yet, as in the story of Joseph, we are challenged to press on and persevere within our families, to allow space for God to transform our brokenness. No, not in cases of abuse. In those cases God fights for liberation and justice.

But in times where hope seems impossible due to brokenness and betrayal, Joseph's family reminds us of the grounding power of love, and the power of transformation over time. Joseph's relationship with his brothers didn't heal for decades. But eventually, God brought them back together - and their hearts were open to transformation. 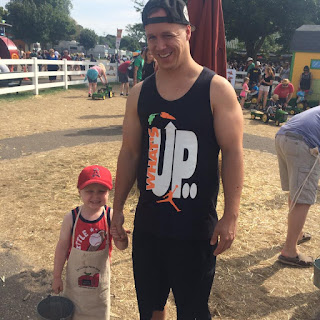 A special day a few years ago with my brother, Kevin. Sibling relationships matter!

1. Why did Joseph trick his brothers into thinking they'd stolen something from him?

2. What do you think his brothers were thinking when Joseph found the cup?

3. Why didn't they recognize him at first?

4. Do you think Joseph's brothers regretted what they'd done to him, and that's why Judah protected Benjamin?

5. Have you ever tricked or been tricked by a family member? How did you feel?

6. Has God ever worked transformation in your family relationships? How did it happen?

O Lord, throughout these 40 days, I want to hear your voice. I want to feel the presence of your Spirit, even when my family relationships feel broken or marked by betrayal and trickery. Help me to see the goodness in the ones I love, and leave space for transformation, on your time frame. In Jesus' name, AMEN