What keeps us safe?

I'm sitting here at my neighborhood coffee shop, thousands of miles away from all the ostensibly dangerous Central American migrants and their families threatening to cross the southern border, bringing drugs and contagious diseases and teddy bears and diapers ... miles even from the more murderous neighborhoods of my own city, where street gangs shoot each other and sometimes innocent bystanders over turf wars and drug feuds ... miles even from the encampment in my own city of people who don't have a safe place to stay, many of them American Indian and battling demons of mental illness and drug addiction - some of them again women and children, there by circumstance and certainly not by choice.

I'm sitting here in this bougie, slightly hipster, slightly WASPy coffee shop, wearing an ironic black stocking cap slouched back on my head, sipping on a drink with more syrup than coffee, and I'm wondering what it really means to be safe.

We sacrificed a lot to live here, paying less than we would have in our old home of Southern California but more than we would have in almost any other neighborhood in Minneapolis, because we wanted to walk to restaurants and shops and lakes and parks, and we wanted our children to attend an exemplary public school, and we wanted to be able to take public transportation downtown to work.

A few months after we moved here, in May 2017, a woman was shot and killed in her own alley by the police. Justine, a spiritual healer originally from Australia, was well-known here. She was calling 911 to report an alleged sexual assault she'd heard outside. Instead, she ended up dead.

We kept walking the lakes and biking to the park anyway, pushing my youngest son in a stroller and playing baseball in the backyard; letting the boys ride their scooters up to the nearby shops and restaurants, and marveling at our fortune to live here, where kids still felt comfortable waving goodbye to mom and dad and riding bikes to the park and wading pool alone, conveying a sense of urban neighborhood rare in America in 2018. 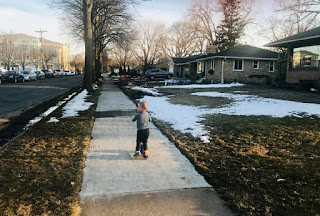 My mom came over to walk with me to the lake often, and each time we remarked that we were so glad I lived here, and we loved so much the unique homes and their gardens, and even the overflowing, over-landscaped, urban wildflower arrangements, that took over their owner's lawns with reckless abandon and suggested a certain laissez-faire approach that befitted the self-consciously well-off liberal neighborhood.

People put Black Lives Matter signs in their front yards, and signs with lots of words talking about how all are welcome here, and even I love my Muslim neighbor. It was progressive urban well-intention at its best, in one of America's whitest metro areas, where racism was often a whisper rather than a shout.

We, and when I say we, I mean all of us but especially my fellow well-intentioned and hyper-well-meaning millennial young professionals and particularly parents - we do so much, as much as we can, to make sure that we are safe. We research child care and elementary schools and bottles and organic onesies and neighborhoods and T-ball leagues. We use BPA-free everything and label anything and buy reusable Bento boxes for school lunches. We sign up for baby music classes and spend all our free time pumping and sacrifice ourselves for the betterment and safety of our homes and our loved ones and our possessions and most importantly, our children.

A couple of weeks ago, my son's Kindergarten class in this same neighborhood, a school ranked 10/10 on all the websites I consulted, had a little Readers Theater performance. Almost all the kids in the class already knew how to read, and so they put on a play of a few well-known children's books and songs.

When we got there, my 3-year-old and my husband and me, I was shocked to see that nearly every other parent in the class was attending as well. A crowd of white-collar professionals and stay-at-home parents: doctors and lawyers and engineers and pastors and managers and salespeople -- almost everyone had come, some of them bringing a nanny. It was a remarkable cross-section, somewhat racially and ethnically diverse, some people speaking languages other than English, a credible representation of the lengths that we would all go to support our children, and the ways so many of us worked in fields that would support that desire and allow so many of us to leave work in the middle of the afternoon on an average Thursday.

This parental support made a clear difference in the functioning of the class. The teacher could count on parental involvement, both in teaching kids at home and helping out in the classroom. It was a marked difference from experiences had by my mom and brother, both of whom spent careers working in high-poverty schools. By this I mean not that the parents at my son's school were more supportive, but rather I mean that by virtue of our careers and supportive work environments, and of course because of relative financial comfort, we were able to be supportive in a way that people who had less flexibility and relative support at work and at home would be able to do, like leaving work in the middle of the afternoon during the week.

I was aware of this privilege and its rarity, and I was grateful for it, even as I embarrassingly watched my son give the thumbs-down sign during his performance, because he didn't get the role he wanted.

Yesterday another event happened at my son's school, an event significantly less comforting and significantly more scary. After the after-school Spanish and language classes finished for the day, a group of kids were playing hide and go seek outside in front of the school. A few parents stood around and watched, chatting together. It was again an environment of privilege and of parental dedication, the best of the American desire for education and to achieve the American dream borne of  hard work and diligent effort.

At one point, in the mid-December darkness of about 5:30 p.m. as the kids played hide and go seek, a strange white man in a newspaper cap with a long, thin black beard, leaped out of the shadows and grabbed an 8-year-old girl, attempting to abduct her. She screamed and twisted violently away, running back into the school for safety. 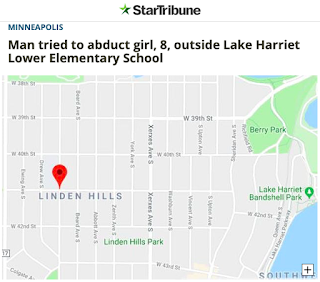 A TV news reporter happened to be in the group of parents standing nearby, and the story made the front page of the Minneapolis paper the next morning. I first heard about it before bed that evening, through a phone call from the school district. The next morning I talked to my Kindergarten son about safety, about not going anywhere with strangers, and I tried and failed again to get him to memorize my cell phone number.

As of now, they still haven't caught the perpetrator, and my son's Kindergarten teacher sent home an excellent email the following morning about the way they'd addressed the incident in class. The brave girl had escaped by her own merit, and all the safety valves we'd put in place had succeeded: the school was open, the other kids were OK, and teachers were using this incident to teach the kids about safety again. A well-positioned community had been mobilized to protect its youngest members, and the response seemed certainly adequate, especially as the story took precedence in the paper over an actual shooting in another neighborhood that same evening.

Today, as I envision my son in school - in that same school that we scrimped and saved and fought to make sure he attended, I do not feel scared or unsafe but I do feel that slight stomach-churning sense of unease. I sensed it again as I read this morning about a shooting in a Christmas market on the French-German border.

Perhaps in our Ring doorbell videos and school ratings and helicopter parent tendencies, we've forgotten the very real truth that in this world there is no such thing as absolute safety. On a random Tuesday there can be an attempted abduction at your child's highly regarded public school, or on a random Thursday you can get a call that your latest mammogram detected something different, or your spouse doesn't love you anymore, or your mother doesn't remember you anymore, or your investments just went down the tubes and you got laid off from your job.

It is so tempting, ever so tempting, to put our faith in manufactured things, like money or houses or 401Ks. In a matter of days, though, it is Christmas. A child is born, God is made unsafe, vulnerable, a crying baby in a manger with unmarried and un-wealthy parents.

Christmas reminds us that our safety rests not in ourselves but in each other, and in the God who became one of us, despite the inherent safety risks of being human.