I'm sitting here writing this post in a freezing cold computer room, looking out on, oh I don't know, the 500th day in a row of cloudy skies and gray weather, vacant branches and withered leaves; dusty falling snow that turns to mottled white as it hits the brown concrete of the path to our detached garage. 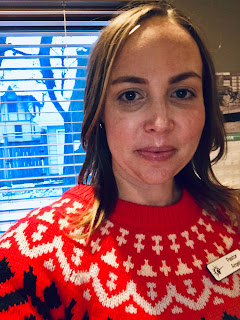 I fear I have gone full-on Minnesota this day, wearing a Fair Isle red sweater and Sorel boots. If you notice a glint of shine below my nose, that's not sweat - it's Vaseline, added to combat the redness and rawness of a sinus infection that has managed to hang on for three weeks now.

Our furnace broke last night, and we thought we fixed it, but it broke again this morning, and after seeing the technician's invoice, I told him: "Merry Christmas to us." At one time we'd thought about heading South after Christmas this year, but instead we are adding a toilet and a new furnace motor - and ultimately a new bathroom. Happy HVAC and Plumbing Christmas; fitting indeed for my engineer husband.

Really, though, as the mom of two boys - a second toilet is a welcome gift indeed.

I write all this not to complain, though complaining has its place and time. We weren't that cold really because of the furnace. In a quirk of our 1950s built house, our bedroom is not connected to central heat, and we rely on baseboard heating, anyway. We have a gas fireplace upstairs and a space heater in the basement, so we certainly survived unscathed.

I thought about the encampment of homeless families and individuals in Minneapolis, many of them Native Americans, and many of them battling addiction and huddled around fires for warmth. I remembered one of them being quoted as saying: "You could have 100 blankets on you, and you still wouldn't be warm." 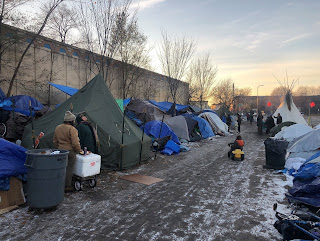 I have not known that cold.

Still, the cold is a theme in this season of life, and it's ironic because this is supposed to be a season of jolliness and warmth, of spiritual cheer and generosity and Go Tell it on the Mountain. I mean, it's all gotten so much better since President Trump made sure we could say Merry Christmas again <insert sarcasm font>.

Sometimes I find the saying easier than the being. Merry, that is. My late-night dramatic coughing spells are testing our whole family's patience, especially the one night I decided to experiment going to bed without Robitussin.

At our church, we're in the midst of the waiting of Advent while our whole church goes through a transition process in hiring a new lead pastor, and currently being led by an interim pastor. I too am an interim pastor, though life feels kind of like it's always in interim, doesn't it? Always waiting for the next thing to come along.

My sinus infection descended intensely the afternoon after I finally turned in my book manuscript to my editor (Red State Christians), and after a year of feverish reporting, travel, study, interviewing and writing - suddenly there is a lull as we wait for edits and publicity and promotion and for that final day when the book will no longer be a dream but a reality.

For now, it lives in my nightmares: weird, disconnected visions of anxiety or failure. Absent the pressure of book writing, I've been obsessing over what to wear for preaching Christmas Eve. In case you're keeping track, I've returned three failed outfit choices to the stores thus far.

We had to take Josh, our 3-year-old, out of his half-day preschool and are preparing him for a new school that will better fit our schedule, full days on Tuesdays and Wednesdays. Josh and I have always been close; I remember the way he'd cling to me when I'd pick him up from his babysitters in California on the way home from church, the way he would stare at me like: finally we are back together. We've had treasured time together in the past few weeks while he is out of preschool, but it's also admittedly been added pressure on Ben and me to juggle childcare and make sure we get everything done for work, while meanwhile I try not to hack up a lung or choke to death on my Neti Pot.

My grandpa is in the hospital, far South in rural Georgia, almost unreachable, battling pneumonia and learning of a worsening case of congestive heart failure. He will be OK, the doctor told my mom, but in his late 80s, he will not be OK forever, and someday the indomitable force of nature who blew in and out of churches as a Pastor, who built a gym and hobby farm in the Northwoods of Minnesota, who told me not to be afraid to say: "Be quiet young man!" while I was preaching -- someday he will slow down, and all his passion and energy will quiet.

It will be hard. Change, struggle - it's all always hard, whether it's saying goodbye to a loved one, or transitioning stages with a cranky toddler, or walking through new stages of a marriage together with your partner: the days of romantic dinners and spontaneous getaways now long ago; changed instead to together cleaning the filter of a damaged furnace, picking up coffee grounds on the floor, and setting dates to clean said filter long into the future.

As I remember all these things, my fingers are still cold, but my heart is strangely warmed - perhaps a la the fervent missionary and Methodist John Wesley. In a season of cold, far from our one-time homes in California, Vegas or Florida, I must cling to any source of warmth I can.

This week, among other things, I cling to this. In an artificially warmed pool, humid with sweat and the stench of chlorine, two little boys held up a swimming lesson report card and smiled for the camera. Swimming wasn't always easy for the Denker boys. Jacob, our 6-year-old, was terrified of water and lessons for years. Up until as late as a year ago, he'd glom onto his teacher and the wall - shrieking each time his feet left the comfort of the pool floor. For my outgoing adventurer, this was unusual, but Jacob's fear was real. Slowly, a teacher named Maria took his hand and ignited his imagination, letting him pretend to be Batman when he jumped in the water, and teaching him underwater high fives for completing difficult strokes.

Maria, Maria; the mother of Jesus and our Swimming Savior. This week I watched as Jacob held aloft a swimming lesson report card that showed he'd finally passed his level. He was bashful but proud, and Maria's eyes shone too.

Then there was Josh. Our bruiser, our sensitive angel, the boy who moves quickly from round-the-table hugs and kisses into biting and tackling and leaping over furniture; Josh finally got to start lessons of his own this fall, when he turned 3. This week was his first report card. He was proud, too.

And somehow, despite the zero degree temperatures outside, my purse filled with used Kleenex and fruit snacks and spare pairs of boys underwear; in that indoor pool, hugging my sopping wet boys while my third boy, Ben, sat by my side and watched with pride.

Somehow I was finally warm. 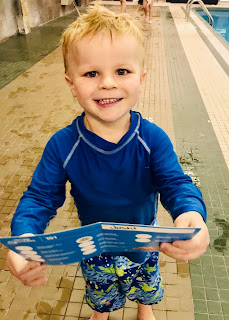 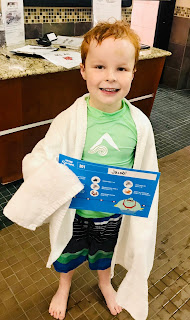