It’s Wednesday at 4 p.m., I haven’t blogged yet, I’m sitting at the library with Josh minutes before I have to drag him out to meet Jake at the bus, and I’m basically spent.

Maybe you are, too. I am preparing for my Christmas Eve sermon at church, balancing being meaningful with being short, as our concerns about crowding and the parking lot and running on time -all important things - battle with the desire to say all the things about Jesus on a day when people are often thinking more about Amazon and cooking ham.

I got my first edits back for my book and went into manic creative mode, working all night without eating, sleeping or showering for a few days, and it was good for the book but bad for me. My cough came back and I walked back to work this week depleted.

Everyone I saw seemed depleted, too, walking around with our minds anywhere but here - Christmas and Advent coming in tiny bursts at inopportune moments when God simply wouldn’t be ignored.

As I sat here, I spent some time reading where I was four years ago on Christmas. Jacob was 2, and we lived in a townhouse outside Chicago, preparing for my second Christmas as a solo pastor at St. Philip.

It seems every Christmas I’m yearning again for God’s promise that my audacious, improbable hope for Christmas against all odds will be fulfilled. My worries this year are different; sometimes I think I’m making progress in this thing called faith, other times the world smacks me in the face with the allure of hopelessness and emptiness.

I want to share with you my blog from a Christmas 2014. And in these last days of hoping and waiting, may you too feel the blessed assurance that your audacious hope will not be unfounded. 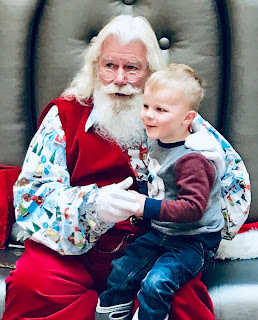 Christmas 2014: Hope in the Shadow of Ferguson and Ray Rice

Last night my husband Ben and I decided it was time to put the Christmas tree up. It was Dec. 3 and in three weeks it would be Christmas Eve so it had to be now.

It was our first tree in 10 years of dating and three years of marriage, and it turns out it takes longer than you'd think to unwind each and every tiny green branch of artificial pine, wrapped and boxed thousands of miles away in China.

With our 2-year-old Jake looking on - needing "mommy help" approximately every 4 seconds, we got the tree up and then had to race upstairs before we passed Jake's threshold from "I'm tired" to "I'm so tired I refuse to ever go to sleep."

It was close, but we made it. Then while washing my face I noticed a crack in the side of the bottle, and soap streamed all over the bathroom floor. I ran downstairs to wash the rug, brushing past Ben, who was standing on a kitchen chair trying to nail our mistletoe ball to the ceiling.

When I came back up from the laundry room he looked aggrievedly towards me, frustrated by the impossibility of this silly mistletoe ball and a slippery kitchen chair, and suddenly one foot went out from under him and he crashed to the floor, twisting the same ankle he sprained on Thanksgiving, missing the final step in his parents' basement.

We were exhausted, and Christmas seemed elusive this year. A week ago we'd sat in this same living room and watched as Bob McCulloch, prosecuting attorney for St. Louis County, dispassionately blamed first the media and then the eyewitnesses, tersely denying Michael Brown's family and America at least a chance at the airing out of evidence in a public trial of police officer Darren Wilson, who shot and killed the 18-year-old Brown in Ferguson, Mo., on Aug. 9.

As I wrote at the time, the whole incident seemed to play out an old American script of white police forces given free reign in predominately black communities. I wasn't convinced that Wilson was entirely in the wrong, but given the history - and the fact that a man had died - it seemed heartbreaking to see an entire community dismissed by a few words from the powers that be.

Ferguson wasn't only about race but about power - about the ways American society conspires to protect the powerful, even in the case of injustice - and as a defeated-looking President Obama addressed the nation last week following McCulloch's statement, he looked as though he'd all but given up. He'd once written that hope was audacious, and in the wake of Ferguson, and riots, and a sense of injustice, hope seemed not only audacious but unfounded.

Three days after McCulloch read the Ferguson grand jury decision, another case was decided in favor of protecting the powerful, at the cost of injustice to the oppressed.

This time the powerful entity was not the white police department of Ferguson, Mo., but an African American NFL running back. Baltimore Ravens running back Ray Rice won his appeal to the league to be reinstated, after commissioner Roger Goodell in September announced an indefinite suspension.

You may remember Ray Rice from the video: that video, where the 206-pound football star is seen dragging his then-fiance, Janay Palmer, out of the elevator. Palmer had passed out after a violent altercation with Rice; he punched her in the face and knocked her out. Then he dragged her out.

It happened, as these things tend to do, in a media frenzy on ESPN and TMZ. Everyone was watching the video, in that sort of sick voyeuristic pleasure that we take in seeing horrible things happen but not to us.

I never did watch it, but I could see the fear in her eyes at the press conference.

At the time, the NFL was all: "We stand against domestic violence," and the Ravens removed Rice's jersey from the pro shop and the league released commercials featuring female fans.

Janay knew, though, that like Michael Brown - she was up against money, power, and influence. Her hope was not only audacious but unfounded, and so she gambled with her life and stood by his side. It was the safe bet, because just two months later - fans in fantasy leagues across the nation were adding Rice back on to their roster as he quietly won his appeal to play football again.

What about that thing that happened this fall, that video, that girl? No one really remembered or cared. In the world today power wins and hope seems worse than audacious; it seems stupid.

Last night, Jake safely asleep in his crib, I came back downstairs and my sprained-ankle husband had somehow managed - miraculously - to finish it all himself. Our stockings were hung on the TV stand with care, and he was waiting under the mistletoe for a Christmas kiss.

He just couldn't get the star to stick on top of the tree; it kept falling and he said this time if it fell again he was taking it off and throwing it out.

He jammed that 8-dollar Target special into that fake Chinese pine branch as hard as he could, and this time as he stepped down from the kitchen chair, he didn't twist his ankle, and the star didn't fall.

I wound up the manger scene snow globe and its tinny voice sang the first and last verses of "Away in a Manger."

Away in a manger, no crib for a bed ... And take us to heaven to live with you there.

Over and over again it played.

The lights were low and the silver 8-dollar Target star was bright. "Away in a Manger" played on and the snow globe whirled with snow and I sat there silently.

My eyes were drawn, irresistibly, to that silver styrofoam star.

It drew my heart up, swelling into my throat; and I imagined how those wise men in the East must have felt the first time they saw it. Inexplicably they followed it into unfamiliar land, without guarantee of safety or security. They followed it because ultimately they knew that hope would not disappoint them, that God does not protect the powerful but lets the oppressed go free, that God brings new life where we thought was only death.

We know that hope does not disappoint us, even in the shadow of Ray Rice's return to football, and Bob McCulloch's dismissal of justice in Ferguson - because God turns earthly power on its head. He uses the weakest entity imaginable: an impoverished newborn baby born to an unmarried, uninsured, migrant couple - part of an ethnic and religious group that was ruled by a faraway empire who held all the power.

God laughed in the face of Rome and he took the Cross and said I'll show you a thing or two about Power: it's fed by life and not by death; by hope and not by fear; by love and not by hate.

Hope was reborn in Jesus underneath the star. When I looked at that silly styrofoam star last night I remembered Christmas. It caught me. It stopped me. It reminded me that - all evidence to the contrary - what wins in the end is not earthly power but faith, hope and love.