Thank you for your truth-telling

On Oct. 2, 2018, Saudi Arabian journalist Jamal Khashoggi walked into the Saudi consultate in Istanbul, Turkey, never to be seen or heard from again. Khashoggi had been living in the United States in exile since June 2017, and he had been writing opinion columns for the Washington Post since September 2017. 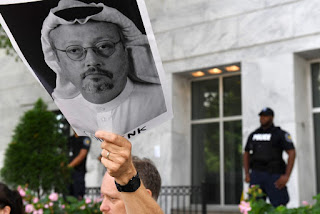 A number of anonymous Turkish police sources claimed they had evidence that Khashoggi had been tortured and killed by Saudi officials brought to Turkey to carry out the murder. Some even claimed there was videotape evidence of Khashoggi's dismemberment.

Pompeo left the meeting saying he trusted the Saudi government to conduct a full investigation of Khashoggi's death, and U.S. President Donald Trump was aghast that Khashoggi's alleged killing might interfere with a purported American-Saudi arms deal allegedly worth billions.

In the cutthroat world of global politics and wealth, one man's life was surely not worth that.

Still, according to the Committee to Protect Journalists, Khashoggi would be the 45th journalist killed in 2018. Everyone loves to hate "the media," but what the crowd of screaming pundits and wealthy writers obscures is that the vast majority of journalists are risking a great deal just to tell the truth, to empower ordinary people with knowledge about government, science and war, among other things. Khashoggi was not the first, and he will not be the last journalist to be killed, because of the threat his truthful words posed to a person in power. 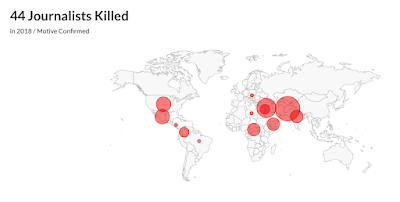 Historically, America has protected journalists. In the late 19th and early 20th centuries, American "muckraker" journalists exposed unsafe working conditions, child labor, and government corruption. They were heroes whose investigative work and watchdog role monitored the government and big business when it came to corruption and deadly practices that harmed workers and children. 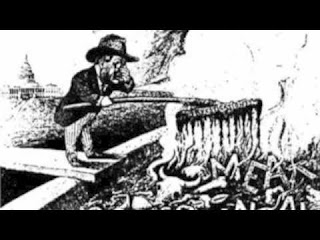 American journalists, regardless of the outlet for which they work, are working harder and generally for much worse pay today as they continue to tirelessly strive to tell the truth. Amid the partisan talking heads and talk radio screamers, thousands of journalists every day focus on telling the truth for the good of the American people. Local journalists, like the ones killed in a shooting targeting the Annapolis, Md., Capital Gazette, aren't in it for the glory. Like Khashoggi, something inside of them urged them to risk it all to tell and expose the truth: to afflict the comfortable and comfort the afflicted.

I used to be a journalist, and while I went to seminary and am now an ordained Lutheran pastor, I always tell people that a part of me will always be a journalist. Telling the truth always matters most, and those among us whose profession has truth at its core are to be revered, honored and listened to.

It was on the sports copy desk and in editorial board meetings that I learned the most about ethics, that I was treated with the most respect as a woman in a male-dominated world; and it was in the newsroom that I felt the most clarity about my job. Wherever I went, whoever I interviewed: I knew I simply had to tell the clear and concise truth, with rhetorical power.

I was reminded today that the vaunted Naples Daily News, the paper where I spent the bulk of my early 20s, covering the Super Bowl and high school football and pro hockey, had been bought by media glutton Gannett and was in the process of merging with its neighbor to the north, the Fort Myers News-Press. In the journalism world of the 21st Century, while many read about bloated media salaries, the reality is that the average journalist faces regular layoffs and paycuts, with news hole space condensed and reporters asked to do more and more multimedia work on less and less budget, time and staff. A few years ago I returned to the Missouri Journalism School, widely considered among the best in the country, to serve on a sportswriting panel. On that visit, in 2016, I was told by a former professor that it was common for graduating journalism students to earn between $25,000 and $30,000 annually.

As a nation created for and by the people, I believe Americans today need to support our working press. The working press is not out to lie to you or to support one political party or another. The vast majority of journalists didn't get into this for money or fame. Like me, at the University of Missouri Journalism school in the midst of the Great Recession, we believed in the greater good of truth that was shared by millions. Like the great Christian reformer Martin Luther, who was the first to translate the Bible into the vernacular language of common people, most journalists believe that everyone has the right to truthful and important information. The press must remain free, but for it to be so, it must be supported by the American people.

Jamal Khashoggi's life mattered. It mattered to the people of Saudi Arabia, who watched as piecemeal reforms were pushed through, but political life remained rife with corruption. Khashoggi exposed the arrests of political dissidents, even as Mohammed bin Salman toasted Trump son-in-law and advisor Jared Kushner.

Khashoggi once had ties to high levels of Saudi government. He could have retired and rested in style, but something in him was compelled to tell the truth and to seek justice for his countrymen and women. He paid the price for truth with his life.

Once, America would have defended Khashoggi.

Today, if our government will not defend Khashoggi and truth-telling journalists like him, the American people must do so instead.

To those working journalists around the world, as you salute military heroes, I salute you.

Thank you for your truth-telling.