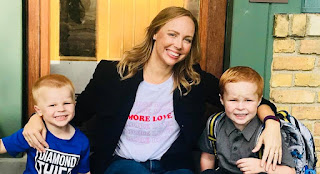 I'll spare you the 15,000 other insane worries and random thoughts that are constantly buzzing around my brain. I blame social media.

1) We did it! Oh my gosh. We made it! He turns 6 in just a few weeks and at one point we were worried he wouldn't survive the car ride home from the hospital, but here we are -- KINDERGARTEN! Is there some kind of parent trophy available?

2) He is so ready. He's so smart, so capable, so friendly. He's gonna be great. He's been waiting for this moment. I can't wait to hear all about everything that happens.

3) His teacher is so amazing. Unfortunately he is sitting right next to her desk. So now she gets to answer the 50 million questions he asks each day, including detailed explanations of all the recent tornadoes, hurricanes, and earthquakes all over the world -- and the detailed diets of the animals of the African Savannah. 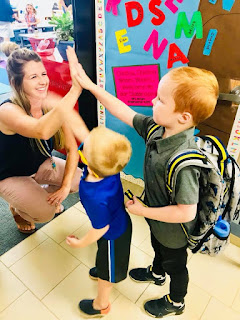 4) Oh my gosh he's in Kindergarten. I swear he was just born. Remember those long afternoons on the couch when he refused to nap until I lay down there with him, in the living room of our 1-bedroom apartment on a threadbare green couch we bought at a furniture warehouse in Kansas. It used to be just me and him, while dad went downtown to work, we did stroller walks and ate at Chipotle and you sat in your swing while I did exercise videos in that same 1-bedroom apartment. 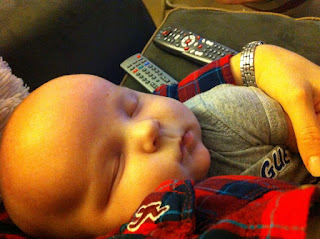 5) It used to be just me and him. Except for my friend who let him play in her student housing apartment in Berkeley, and her daughter gave him a special lion, while I drove in and went to class on Tuesday mornings. And except for Nicole, who worked in the gym daycare in California, and held him close - even when he went for another baby's bottle and tried to drink another mom's breastmilk.

Except for Nathmiyeh, who watched him when he went to daycare in Chicago and I went to church - endlessly patient with his tenacity and stubbornness, even as a 1-year-old. And Julie, who crowned him champion of the daycare meatball competition. I wonder if his 10-meatball record still stands?

And except for Ellen and Joe, the kids of the church secretary, who played with him in the nursery and invited him over to watch videos from their native England.

Except for Carol, who taught him the B-I-B-L-E in California; and Mrs. McCurdy and Donna and Jackie, put him in pink church preschool shoes when he wasn't quite potty-trained and wet all his clothes; and taught him to pedal tricycles around the church playground while I worked upstairs.

And for Karen and Lee and Jacob, who welcomed him to Minnesota and listened to all his stories and remembered them all.

Except for Grandma and Grandpas and uncles and aunts and cousins on both sides. And so many people who loved him. 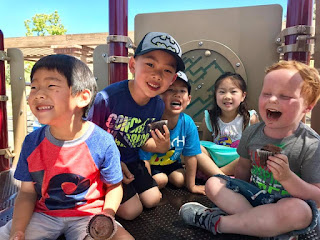 6) I guess it was never just me and him - and daddy, our shared best friend and idol and also sometime-clone. It was all of us - this beautiful community that has protected him and carried him from person to person and place to place. So I guess he'll be OK without me, even though this summer it was me and him and his little brother a lot of the time.

7) His little brother cried today when he said goodbye, because he didn't want to leave his best friend, his protector, the one he always runs to when we're trying to discipline. "THAT'S MY BROTHER!" he says, and I marvel at the way he too used to be a crying baby in the backseat as we drove past the canyon on the way home from preschool and he shook his head and rolled down the window. Now they are not only brothers but friends. 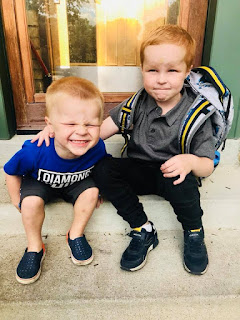 8) His little brother cried but he didn't, but he did hug me twice, came back a second time and dangit now as I remember it maybe I am crying - alone, in my office, an hour away from pick up - knowing that now I can never go back, as I could never go back when he crawled and then walked and then talked - this heartbreaking process of loving and slowly leaving - I hold on loosely.

9) He told me he would always be my lovebug, even in college, so I guess there's that.

10) So I guess this is the parent trophy: the prize. Not the free public school (though, thank GOD after years of paying for childcare), not the cute photos and the social media likes. No the prize is this moment, remembering who he was as a baby and who he is today: 5 almost 6, a Kindergartner. He is sometimes petulant, impatient, always the center of attention, exceedingly kind, patient with his brother, empathetic to anyone in the room who needs a hug or a smile, fantastic rememberer of anything and everything, brave adventurer and tryer-outer and traveler and exuberant package of joy and ... my son, the Kindergartner. 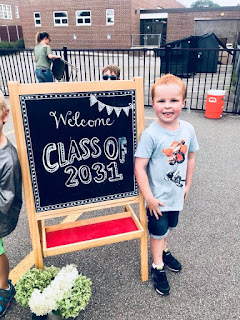