Changing lives: one story at a time: for STORY magazine

We all need to hear some good news from time to time - especially good news about changing lives in neighborhoods that are often in the headlines for "bad news." So this week on the blog, I wanted to share this article I wrote for Luther Seminary's STORY magazine, about a woman named Lucy Mungai - a minister and Kenyan immigrant - and her work at the Center for Changing Lives in the Phillips Neighborhood of Minneapolis, a place where new immigrants and refugees often settle in the Twin Cities. Mungai's story is about an unexpected person's life change: and a community in transition where the Holy Spirit is at work.

Read the story in Luther's magazine here on p. 13!

When asked to share a story about her work at The Center for Changing Lives in the Phillips Neighborhood of Minneapolis, Lucy Mungai ’11 Ph.D. shares a story you might not expect. 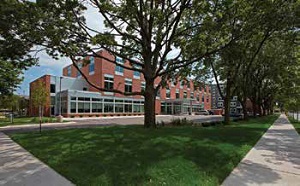 The Center for Changing Lives: Minneapolis

It’s not a heartwarming tale of a child finding a loving caregiver. It’s not a practical lesson in saving a family from homelessness through a combination of hard work, policy changes, and affordable housing. It’s not even a story about how volunteers’ lives are changed at the Center, though all of these stories exist many times over.

Instead Mungai tells a story about hatred transformed into love, about exclusion and acceptance, and about how needy hearts are every bit as important as needy stomachs.

Mungai’s story begins with a senior woman who visits the Center often for community meals and food assistance.

This woman, Mungai remembers, was “not very happy about some of the people we serve here.”

“She couldn’t see how a Christian organization would give this kind of hospitality,” Mungai says, noting that the woman was particularly uncomfortable with the guests who were Muslim.

The Phillips neighborhood is often referred to as a “gateway community,” where new immigrants and refugees tend to settle when they first arrive in Minnesota. Over the past two decades, many who find themselves in the Phillips neighborhood have sought political asylum from Somalia and other parts of East Africa that are majority Muslim regions.

Mungai said the woman went so far as to tell some of the Center visitors, who were young and Muslim, that they were not welcome.

“She carries some authority because she has been coming here a long time,” Mungai says. “And she scared them. They thought they would have to leave.”

Mungai approached the woman and they spoke in the sanctuary shared with Messiah Lutheran Church of Minneapolis. Mungai told the woman that although she could have her own opinions, they could not be shared with the guests of the Center. The woman remained angry and defiant, and Mungai felt hurt. It was tough to see someone who was struggling lash out at others who were struggling.

A few weeks later, Mungai saw the woman again at the Center. She felt a tightness in her chest. What would happen this time?

“She ran up to me and hugged me, and we both cried,” Mungai says. “She told me how she has been rejected in so many places … that I had shown her that she’s still welcome here; it meant so much to her.”

“It is only God who could do this,” Mungai says.

For Mungai, this story is the heart of her work at the Center. In the midst of an ever-shifting political and polarized world, the Center represents hope — for many different people who have felt rejected to be accepted, loved, and have their lives changed.

Mungai has had her own journey to acceptance. She moved to the United States from Kenya in 2000 and has been in Minnesota since 2003. She says even among the East African immigrant community there can be resentment toward people in poverty.

“We sometimes think they are not working hard enough,” Mungai says.

But as she met people at the Center, beginning to work there in 2008—during the transition from Messiah Lutheran Church to the Lutheran Social Service of Minnesota-supported community center—Mungai listened to stories and realized that “the systems just keep some people marginalized no matter how hard they try.”

Mungai earned a Ph.D. in pastoral care and counseling from Luther Seminary in 2011 and now serves as the community relations liaison and volunteer engagement coordinator at the Center. She has also worked to create a Lutheran Social Service of Minnesota-sponsored clinical pastoral education student internship at the Center, to give Luther students a chance to work with the diverse population the Center serves.

From an AIDS initiative and parenting classes to affordable apartments and employment services, the Center offers a number of ways to build up the Phillips neighborhood and change countless lives. A full list of services offered there can be found at lssmn.org.

As Mungai’s stories show, however, it’s not just the guests or volunteers whose lives are changed at the center—it’s the changing of the community together, bound together by the accepting and patient love of God.