A Good Place to Call Home: For Fourth of July

A couple of days ago, I was flying back to Minneapolis after three days in Dallas, visiting large Southern Baptist churches for Fourth of July weekend and learning how American patriotism and Christianity do and don't overlap, and wondering what Jesus might say in our midst.

There was much to love in Dallas: kind, generally open Southern hospitality; a vibrant farm-to-table food scene; a robust atmosphere for dialogue about faith and politics and how the two may or may not overlap. Unlike my home town of Minneapolis, where people tend to be circumspect about their true opinions, the Evangelical Christians I spoke to in Dallas were open about the important role their Christian faith, and their churches, played in their lives.

Still, I was dismayed by the uncritical embrace of so much Americana at some of the churches I attended: where we sang the Star Spangled Banner and said the Pledge of Allegiance at the beginning of worship; yet we did not utter the Lord's Prayer or the Apostles' Creed. 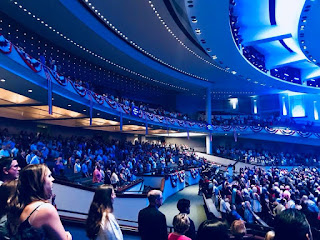 There was much Theology of Glory: the idea that America had been specially created, much like Israel, to hold God's destiny, beginning with an actual reference to explorer Christopher Columbus, whose bloodthirsty and greedy desire to destroy Native Americans and take their gold was left unmentioned.

I thought, flying back to Minnesota, that perhaps this Fourth of July I should blog about the lie of American freedom. For all of my justifiable pride in my country: its accomplishments, its openness, its big desire for democracy and freedom for the world - I couldn't help but note that for many Americans, the idea of American freedom had been nothing but a lie.

In that first America, freedom - to vote, at least - was limited to white, land-owning men. Women, people of color, people living in poverty -- need not apply. Most African Americans were enslaved: Americans not by choice but by bondage and chains.

The freedom to define one's own destiny, that powerful, alluring American dream - was nothing but a mirage for so many of us for so many years, and yet I realized that what I'd believed all along was most great about this country was not the realization of that dream but the idea that it existed at all: the act of dreaming the dream itself.

Perhaps the most heartbreaking thing about the American Dream in 2018 is the obliteration of the idea that it is even a worthy or legitimate dream for everyone.

The national dream has been replaced with nostalgia heaped upon guilt that so few bear the cost of our freedom in our armed forces, a cost that can never be repaid no matter how many times we say "thank you for your service," and let service members board first on the airplane.

Greatness was never built upon nostalgia and guilt: only freedom and honor.

Still, as we made our way toward the ground at the Minneapolis - St. Paul International Airport, I looked down at that familiar landscape I'd watched so many times before.

I had always returned here: from college in Missouri, from sportswriting in Florida, from pastoring in Vegas, graduate school in the Bay Area, pastoring in Chicago and Orange County, Calif.

I always came back and it was only now, after all these years, that I realized I should not take it for granted. 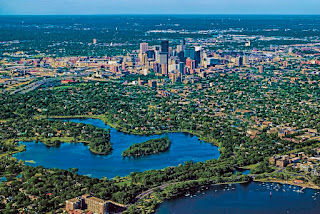 Aerial view of Minneapolis and surrounding area, with city lakes

I had been flying all over this year: the brown mountains and arid air of the Southwest; the muggy closeness of D.C.; the wide open spaces and sunshine of Texas; the swamp of Florida; the green rolling hills of Appalachia, the concrete jungle of New York City. And for you perhaps that is the way you feel when you see your home: the canals and palm trees of South Florida; the open fields of the great American prairie; the towering ranges of the West; the forested expanses of the Pacific Northwest and New England.

For me it is as it always has been: the green trees and blue lakes that beckon me closer, reminding me of how lucky I am.

A thought flew into my mind, bouncing off questions about Christian Nationalism and patriotism and Jesus and politics and Hamilton and Abe Lincoln.

This is a good place to call home.

There is still room for goodness and beauty in 2018 America.

Don't let anyone tell you it isn't true.