On My Mind: Family Separations at the U.S. Border

I want to start a new feature here on the blog. I'm deep into manuscript writing for my upcoming book, Red State Christians, which is due to Fortress Press on Jan. 1, 2019. Read an update on my book progress here. It's SO exciting but also totally overwhelming. I used to read posts from other writers freaking out about their books and think - oh geez, so self-indulgent - and now I totally get it and am trying not to utterly dissolve into a puddle of imposter syndrome and self-loathing as I stare at my keyboard and try to envision actually finishing this thing!

Moving on, in order to keep this blog a helpful and worthwhile place to visit while I complete the manuscript, I want to add this feature: On My Mind. These will be occasional short blogs about the topics I've been mulling over that week, and just a little insight into where I see Jesus at work in the midst of my life and the world at-large.

These might not be completed blogs, and the topics might seem scattered - but I hope you all can relate and find them a helpful place to sort through the topics that are probably on many of your minds as well, and shed some of the light of Christ into our often all-too-often foreboding world.

Family Separations at the U.S./Mexico Border 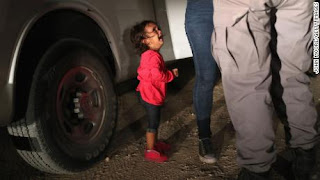 I've been horrified and - to be honest - almost paralyzed with despair over the stories of parents and children being separated at the United States/Mexico border, most of them fleeing violence and/or abuse in Central America.

The first story I read was a couple of weeks ago, and I urge you to check it out here, if only to come face to face with the horror happening in our country. It is the story of Marco Antonio Munoz, a 39-year-old father from Honduras who crossed the Rio Grande with his wife and 3-year-old son. Upon turning themselves in to claim asylum, Munoz was told the family would be separated.

In the words of a Border Patrol agent quoted in the story, "The guy lost his s---; they had to use physical force to take the child out of his hands."

I think of myself as that wild, crazy mother - desperate to save my children - desperate not to lose them - and I can't help but think I would be like Munoz, found the next morning with a piece of clothing twisted around his neck: desperate with fear and fatigue and hunger - after a life-threatening journey from Honduras - utterly distraught and made insane by the prospect of losing his son.

Since then the story on family border separations has spiraled out of control, with politicians and media figures all chiming in - everyone pointing fingers at one another - President Donald Trump, as usual - at the center of it all; Department of Homeland Security Secretary Kjersten Nielsen behind a podium, using facts and figures and words to paper over the very real chaos and horror and torture.

Attorney General Jeff Sessions using Bible verses, from Romans 13, to claim that somehow Jesus would have supported the law; or something, anything, to wash all our hands of culpability and continue to call ourselves Christians.

And of course the facts remain: that immigration is a slippery issue, that laws must be followed, that borders must be secure - that no one has ever known how to handle the influx of desperate families and children from Central America; and yet we all knew in our deepest hearts, inside, that this could not be the way. Even Trump knew this, it seemed; it had to have choked him as he thought of his own children.

The only way to swallow the idea of separating parents and children at the border, if you are a parent yourself, is to think that it would never happen to you. That you are so different from them, from Marco Antonio Munoz, that your children would never be those children on that recording: tired and sweaty and screaming for mommy and daddy.

At the heart of parenthood is pain and this awful truth: that we are all any of us a second away from utter disaster, and all of us fail our children in one way or another.

As I see parents desperate to save their children at the border, I feel my own guilt that I have left my children this week: to travel twice to the East Coast for book research.

I can't help but imagine Trump's own guilt and regret at his absence in his own children's lives. His wealth came at a very real cost - and his Presidency today costs - of his time with his children. As a parent you are constantly making very real wagers: is it worth more that I write this book, that I take this job, that I do this business trip - and be separated - if it gives them a better life?

Or am I lying to myself?

It's been easy to point fingers at Trump and immigration officials this week, for the lies and the willful deception and the cruelty, but even as I do so I realize that I am constantly lying to myself as well, weighing as well, doing the best I can with what is ahead of me.

There are no perfect choices.

Neither were there perfect choices for Marco Antonio Munoz. There was only what was ahead of him: a river, America, and his 3-year-old son.

To judge another's choice is to constantly circle yourself like a dog chasing its tail. You will only end up biting yourself in the butt. Better instead to show mercy and love. 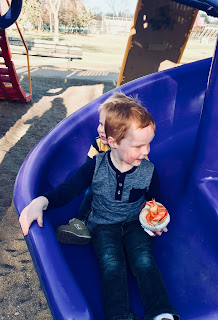