A note from Angela: I had the opportunity to write an article for CONNECT Journal's 2018 Spring Issue. This issue was devoted to women and girls in ministry, and all articles were written by women! I got to write about women and trauma and the church - and I interviewed a fantastic clinical psychologist who shared her expertise. I wanted to share the article here, but I encourage you to read the whole issue! It's downloadable here, and you can also join the ELCA Youth Ministry Network and subscribe to the Journal. It's a great resource for anyone in ministry, particularly people who work with youth - or are youth! 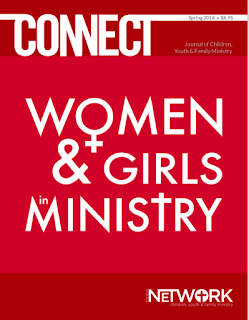 For nearly 30 years, Dr. Sara Mize, a clinical psychologist who specializes in human sexuality and trauma, has been hearing women’s stories. The women - and it’s almost always women - sometimes speak haltingly, sometimes passionately. Some of them are telling their story for the very first time - women in their 50s and 60s who have buried secrets deep inside themselves.

Dr. Mize hears their stories. She believes them. And slowly, carefully, patiently, kindly, they work toward healing, and - Mize’s preferred word - thriving.

It is stories like these, told to Mize for decades, that broke open the American consciousness of sexual abuse toward women in the 21st century. Activist and sexual assault survivor Tarana Burke coined the phrase “me, too” in 2006, to begin to speak out and help particularly women of color who had suffered sexual abuse.

Eleven years later, on October 5, 2017, celebrated actress Ashley Judd accused media mogul Harvey Weinstein of sexual assault, in a breaking news story published by the “New York Times.” Weinstein’s sexual misbehavior toward women was somewhat of an open secret in Hollywood; it was later made public, though Judd’s truth-telling would be the decisive step in a new movement of female empowerment.

Ten days after Judd’s story broke, actress Alyssa Milano reignited the MeToo move- ment, tweeting: “If you’ve been sexually harassed or assaulted, write ‘me too’ as a reply to this thread.”

Social media pages across America lit up with #MeToo. From Olympic gymnasts to Holly- wood actresses to politicians, long-held secret stories of trauma were being told. In November, women came forward to the Washington Post with stories of sexual assault against them as teenagers by Republican Alabama Senate candidate Roy Moore, who would later lose his statewide race in a stunning upset by Democrat Doug Jones.

Minnesota Senator Al Franken (D-Minn.), resigned from the Senate in light of accusations of sexual harassment and misconduct.

TIME magazine chose as its person of the year: The Silence Breakers, voices that launched the #MeToo movement, including Burke, Judd, Milano and even singer Taylor Swift.

Perhaps the only body not quite coming to terms with the consequences of #MeToo was the church.

On Jan. 7, a Memphis megachurch gave a 30-second standing ovation to its teaching pastor Andy Savage. The ovation wasn’t unusual in and of itself. What was unusual was that Andy Savage had just admitted to a “sexual incident” with one of his youth group students almost exactly 20 years earlier, at his first congregation in the Woodlands, Texas.

Jules Woodson, who was then a high school senior and 17 years old, was in Savage’s youth group. She shared her story on January 5, 2017, a month after receiving no reply to an email she’d sent to Savage remembering the night he - in Woodson’s words - drove her to an isolated location and coerced her into sexual activity.

January 5 wasn’t the first time Woodson had shared her story. Shortly after the incident, she shared with her church small group, and later her lead pastor, who asked - in Woodson’s words: “So you participated?”

Savage was later allowed to resign, while rumors of what had happened spread around the church: The most likely was that Savage and Woodson had kissed. A party was held in Savage’s honor, and Savage went on to hold pastoral positions at churches across the South, coming to Highpoint Church in Memphis and helping plant the congregation with lead pastor Chris Conlee.

At church that January morning, there was grace and forgiveness for Savage from his congregation, but there was little empathy for Woodson, and little sense justice had been served. Instead, Conlee expressed his regret that Woodson “hadn’t been healed” in the way Savage had been.

In Savage’s telling, he was exalted - a mistake, an incident, before he was married, he prayed about it, he was healed from it - and Woodson was diminished. It didn’t matter much that Savage had abused his power as a church leader or that he’d coerced a minor or that he’d covered it up.

The story of Highpoint Church made nationalnews because it exemplifies the many ways churches can- and have - handled sexual abuse in unhealthy, damaging and ultimately un-Godly ways. They have often shamed and diminished the personhood of sexual trauma survivors, particularly women, while striving to maintain the dignity and personhood of perpetrators - often male clergy. This is a story not just of megachurches or of the well-publicized Catholic priest abuse cases, but of all churches. Many churches - and pastors - don’t know how to talk about sexual abuse, much less confront it in their own communities. That’s where Dr. Mize comes in.

Mize, a member of Edina Community Lutheran Church in Edina, Minnesota, says there is hope for churches in light of the #MeToo movement.

“I think the increased awareness is fabulous and wonderful. It allows people to have more of a voice, and to see themselves and their ex- periences in a way they may not have before,” she says. “I think that’s really huge. There’s such a wide range of sexual trauma.”

Mize recalls the experience of women across America as the #MeToo movement first began.

As more and more women recount their experiences of gender inequality, harassment and abuse, Mize finds hopefulness in the increasing scientific study of trauma and the way it impacts the body and brain. When she meets with women who’ve experienced sexual trauma, Mize can help them walk through patterns in their lives, many of which result from earlier sexual trauma and abuse.

She emphasizes that each person’s response to trauma is individual and cannot be generalized, but she sees some frequent challenges: depression, anxiety, post-traumatic stress disorder, addictions, contemplating suicide, and relationship disturbance.

It can be difficult for trauma survivors to trustthemselves, others, the world and even God. Having experienced a devastating breach of trust - in most cases, sexual trauma occurs in the midst of a previously-trusting relationship - trauma survivors are sometimes compelled to create small, controlled worlds for themselves, ensuring they’ll never be vulnerable or hurt again, always on guard against what Mize calls “the tiger in the room.”

Through various therapeutic treatments, trauma survivors can examine their own pat- terns, and begin to move out of unhealthy or destructive patterns into ones that feel more trusting and yet still secure.

The first step toward thriving and healing, Mize emphasizes, is that sexual trauma survivors are believed, from the beginning. “When they aren’t believed,” Mize says, “it’s so damaging. It’s almost like a second trauma.”

When sexual trauma survivors tell their story and are disbelieved, the feelings of mistrust in their world are elevated, reiterating for them that no one is there to protect them, and the world is a scary, dangerous and evil place.

The world of sexual trauma and abuse is a scary, dangerous and evil place, far from Garden of Eden that God intended, and far from the place where Jesus’ love shines - the ideal community of the church.

While the church’s history in ministering to and providing a safe place for sexual trauma survivors is a dark and devastating tale, there is hope for ministry leaders and all in the church who want to move down a different path.

Mize talks about the ways her own Christian faith - her father was a Lutheran pastor - impacts her in her work with sexual trauma survivors. She shares about being taught Jesus’ compassion for all people, especially for people who might be cast out or ignored in the world, the way many survivors of sexual trauma have been in the past.

Mize also lifts up the idea of theology of the cross, that God’s power is often at work most powerfully when the world seems at its most dark. Sometimes her work with trauma survivors brings Mize into stories of unspeakable evil, unbearable betrayal and horrific abuse ofpower and authority. She says what keeps her from dwelling in despair is her trust that the same God who was powerfully present in the horror of Jesus’ death on the cross is the same God who is and will be powerfully present in the healing and redemption of survivors of sexual abuse.

“Sometimes people avoid (telling their story) for so long because it’s so dark,” Mize says. “My goal is to give them a safe place to go into that darkness, so there is hope if we lean in and go there, we can come out with a different understanding.”

One of the best ways to begin to change the church’s legacy on sexual abuse and trauma is to start with what Mize calls “repair work.” She recommends taking new steps with new generations, such as the sexuality retreats that her church’s middle and high school students and their parents attend each year.

The most important repair work for the church may be in simply repenting for past wrongs. “The church needs to hold itself accountable for turning a blind eye,” Mize says. “We need to acknowledge that this has happened and make a statement and a plan for how we continue this process. It won’t happen in a few years, but the church can make use of the research that’s out there, to educate people on trauma research and design protocols for how to address abuse.”

Most importantly, perhaps - believe the women.