My 5-Year-Old is Afraid

I drove my son Jacob to Pre-K this morning at 9:55 a.m., and on our way we drove through the neighborhood streets surrounding our local high school.

As we got closer, we noticed masses of students and teachers huddled around the outside of the building (this wasn't normal).

We saw students encircling parts of the building and holding hands (this wasn't normal).

We saw them holding up pictures commemorating dead students (this wasn't normal). 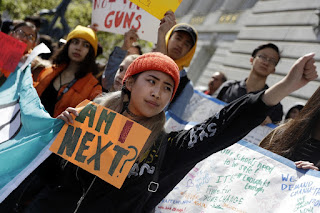 I realized it was 10 a.m., and students across America were walking out to protest gun violence in America's schools.

I realized that more than 400 people have been shot in more than 200 school shootings since 20 first graders lost their lives in Newtown, Conn., in 2012.

This has become normal.

It had been a crazy morning: me trying to respond to work emails and prepare for preaching Lenten service at church tonight. Josh, my 2-year-old, pulling Pop Tarts out of the cupboard and opening them himself, his newest trick to cover the house in crumbs.

Jacob, my 5-year-old, incensed that we didn't have any condiments to bring for the Food Drive today.

Everything felt like it was speeding ahead too fast; a familiar feeling in the life of a mom of little ones in 2018 America: never enough time, never enough cuddles; never enough enough.

As we drove past the high school, I slowed down next to those kids holding hands around their school. Time seemed to stop. I felt the tears welling up.

My own high school experience. The Columbine school shooting when I was 14 years old: an aberration, an uncertainty - only to become routine for high schoolers of today, who just one month ago witnessed Parkland, Fla., become the latest in the ghoulish list of murdered promise.

"Mom, what are those high schoolers doing?" Jake asked me.

I sniffed. Be strong. Don't rattle him.

"They're holding hands to remember people who were killed in school shootings."

I sensed Jake's brain whirring. He's one of those kids where his thoughts are sometimes too mature for his emotional ability to process them. He doesn't miss a beat, but that's not always a good thing.

I bit back the tears again as I saw a young girl's face on a poster. Too young to die.

"Mom why do kids do that? Why do they shoot other kids"

"Mom they're just DUMB kids. Why do they bring guns to school? Why?"

"Is someone gonna bring a gun to my school?"

And perhaps the most heartbreaking ...

This from a kid who has never been able to wait to grow up. Who hung with middle schoolers at church in California. Who watches Mr. Ed with his grandpa. Who started listening to chapter books for bedtime stories at age 5.

He started to raise his voice into a slight wail, biting back tears of his own.

I reassured him that it hadn't happened here, in Minneapolis.

Not yet at least.

Though it could happen today or any day.

At his elementary school or at the high school or even at my church.

Despite my assurances, he knew it deep down.

It could happen to him.

And this the most crushing of all cries of kids in America in 2018.

He was afraid to grow up here.

Even, Jesus says - he will lay down his life for his sheep.

I wonder, how many children will continue to lay down their lives for the cowardly adult sheep of America?

And where is our Good Shepherd?