Super Bowl LII and the End of Protest

Remember when more than 200 NFL players sat or kneeled in response to President Donald Trump's call for owners to fire protesting players?

Notice how even Wikipedia frames the protest. A response to the President. Original intent, whether it was racial justice, civil rights, or a desire by former quarterback Colin Kaepernick to bring attention to police shootings - original intent was lost. 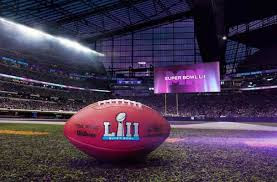 Trump, as he usually does, won the message, won the media, and won the war.

The thousands of think pieces spawned by the protesting players - even mine, about religious connections to kneeling protests, forums on CNN, meetings with players -- it has all faded away.

I'm leading a women's retreat called Cheering for Ourselves about female empowerment the day before the Super Bowl, and Super Bowl Sunday I'm preaching to broken-hearted Vikings fans about how hosting - even your enemies - is a spiritual gift.

Four months ago, I was on CBC News talking about how the kneeling football players were igniting a Christian tradition of protest, particularly one embraced by African American Christians, to bring attention to the need for Civil Rights and fair policing. I was impressed to hear players like Malcolm Jenkins speak about their commitment to the cause, and share how they were active in their communities off the field: not only in charity but also in activism for these same issues.

I was so encouraged, until I wasn't.

As it does, particularly in the age of Trump, the news cycle moved on.

I didn't watch football for a few months. My older son turned 5; my younger son turned 2. I signed a book contract; I weighed beginning new pastoral calls at local churches.

I vowed to watch my first NFL games of the season as my hometown Vikings entered the playoffs as Super Bowl contenders. I rejoiced over the Minneapolis miracle. I was disgusted when the Vikings lost the next week, and I lost myself the following week in prep work for my retreat and Super Bowl sermon.

All the while, since September, I was working behind the scenes with some friends and local activists to see what we might be able to do to bring attention to some of the original issues Kaepernick and his fellow athletes were kneeling about.

If you don't, you aren't alone. And spoiler alert: despite our efforts, we weren't able to organize much of anything around the issues the players originally said they were protesting. People were fragmented: homelessness, trafficking, Native American team names ... it was hard to keep focus and the passion faded.

I went back to planning preaching and pinning pregame recipes.

When most people remember the kneeling protests, they remember a connection to America's military and a disrespect for the flag. Even though the kneeling and protesting players stated explicitly that their protest had nothing to do with the military, their voices were drowned out. There's little room for nuance in our culture of outrage. Most people, overburdened, overanxious, and over politics - simply wanted the protest to go away. There was little room for respectful debate.

National news turned to tax cuts and immigration, and when I walked through the Women's March in Washington, D.C., a few weeks ago, I didn't hear a word about Black Lives Matter or police violence.

We can all be forgiven for our inattention or inability to focus. Each day we're seemingly summoned to be outraged or overjoyed by something happening in national politics; meanwhile my 2-year-old is on about 48 tantrums a day, and I can't quite summon the same level of anger or joy I once could for national news.

As I sit here writing today, four days before Super Bowl Sunday just a few miles up the road in my home city of Minneapolis - I also sit just two blocks away from the site of one of Minnesota's most notorious police shootings. Justine Damond, a 40-year-old, white, Australian-American woman who lived in an upper-middle-class neighborhood, called the police late one night to report the possible assault of a woman in her alley.

Details are fuzzy, as they always are, but moments after her call, a police car drove up with its lights off, looking for a suspect. Officers heard a loud noise, and one of them - Mohamed Noor - discharged his weapon, striking and killing Damond with a shot through the driver's side window.

For weeks, the neighborhood was stunned and outraged. Occasional forums and protests were held. A memorial was set up in front of Damond's faith community. A local group made up of primarily white neighbors of Justine began working with primarily African American groups to protest police violence in the Twin Cities.

But like the many who have lost their lives, Damond's story - and attention to it - is hard to sustain.

There's so much wrong, so much to talk about; we have almost too much information. My local gym, Lifetime Fitness, responded to customer complaints by blacking out all cable news channels on large monitors at the gym.

I fear, that in this age of unsustainable outrage, legitimate messages and protests are being lost. The right-wing claim of "professional protesters" does not seem entirely implausible. Many progressives seem to move from one outrage to the next, lacking focus or - an unsurprising critique of the Democratic Party - a cohesive message, a discipline of sorts.

As I seek to find my own activist voice in the midst of my calls to mother, to pastor, to write - I feel compelled to witness to a Biblical standard and tradition of protest that was stinging and even outrageous - but also never unmoored from its Godly center.

Too many of us, perhaps, can easily answer who we don't want to be. The question looms however, who do you want to be?

And who will listen?

Money and power will always hold the largest microphones. It is perhaps only by the power of God that protest can move from prophecy and lamentation into action. It cannot be a momentary bravery but a sustained, focused one.

When I first wrote about the NFL's kneeling protests, I wrote that perhaps Kaepernick's kneeling was ultimately a respectful gesture - meant to draw quiet attention not to himself but to something larger than himself, a country still in need of racial justice, a country still reeling after the racist violence of Charlottesville, Va., and Mother Emanuel in South Carolina.

Finally, though, NFL teams chose first to stand and link arms - unifying themselves while at the same time effectively silencing the dissident voices in their midst. The teams sent a message of unity - but unity for what?

Now the spotlight of the Super Bowl returns, for a few days, to focus on my very city - and my voice too is perhaps ashamedly silent - or perhaps appropriately silent, in the lack of a unified or sustainable protest movement.

What would Jesus say?

I think Jesus would say Go Vikings. Too soon?