The Steadying of Seasons

My son Jacob got out of bed this morning, groggily, as is his fashion.

He slowly wandered out to the kitchen, then, remembering, made his way to the sliding glass door. Opening the curtains, he shouted: "It's still here!"

He was talking, of course, about the newly fallen snow that was the first to stick in Minnesota this winter. It is likely the first snowfall Jacob remembers. He was 2 years old when we moved from Chicago to Orange County, CA, where the only snow he saw each year came in on a truck for his preschool. I'm not kidding. You waited in lines just to touch it with your hands. 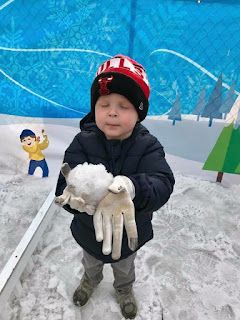 Orange County snow came in on trucks from the mountains

Now, he was captivated by the snow. He was amazed it had stayed overnight. It had a new permanence, lasting, in his life.

He had no idea how long it would last. Possibly until April. But we will enjoy it for now.

It is my first lasting snowfall too, since Chicago in 2015. Time has expanded and contracted over the past three years. Two moves, to California and now Minneapolis, and now two sons, Joshua - Jacob's little brother - born in Orange County and now seeing snow for the very first time.

We were all slowed by the snow. Stopping took longer. Walking took longer. There was a tolerated lateness and an eerie quiet in the backyard. You felt OK about eating soup and going to bed early.

The snow was still here. It was a miracle. 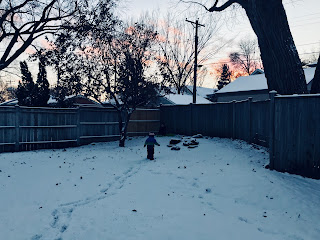 Jacob and Josh explore the snow in the backyard

With Jacob's words I was reminded of an incredible story from the Bible's Book of Acts, a New Testament book that primarily chronicles the adventures of Peter, Paul and the early Christians after Jesus' death and resurrection.

In Acts 16, there is a story of Paul and Silas in Philippi. They'd gone to this district of Macedonia at the urging of the Holy Spirit, and there they'd met many believers, including Lydia, a businesswoman who was baptized with her household, and who hosted Paul and Silas during their stay.

While in Philippi, Paul and Silas encountered a girl who had been enslaved. She was forced to tell fortunes for her owners to make money. Paul prayed over her, and she no longer told fortunes. Deprived of their chance at easy money, the slave owners - the powerful of the city - reported Paul and Silas to the authorities, accusing them of disrupting the peace, and of being foreigners, religious minorities - Jews and not Romans. Paul and Silas were beaten and thrown into jail.

While there, as many religious prisoners have after them, Paul and Silas led their fellow prisoners in praying and singing hymns to God. At this point, there was a sudden earthquake. The foundations of the earth shook, and all the doors were opened and everyone's chains were unfastened.

The sleeping jailer awoke and drew his sword to kill himself, assuming that all the prisoners had escaped.

But Paul, saving the jailer's life, shouted in a loud voice: "Do not harm yourself, for we are all here!"

The jailer asked for light, and he fell down trembling before Paul and Silas: "what must I do to be saved?"

They told him about Jesus, about faith - and that night the jailer cleaned Paul and Silas' wounds, and he and his entire family were baptized - the Bible says, without delay. They shared meals together, and the entire household rejoiced.

Could you use a little permanence in your life right now? A little reassurance, a little constancy?

I know I could.

And as I watch the snowflakes drift and swirl and fall to the ground, my place in this big world reduced to a tiny part of an ever-moving ecosystem, my children safe and my family full of love - I take a deep breath.

Not just the snow. The world. The earth. Your home. Your heart. Your love. Your God. Jesus.

That baby cries from the manger in a little town just six miles from fiery Jerusalem.

Do not harm yourself. I am still here.