To the woman walking the track with her baby strapped to her chest ...

It's cold where I live right now so, if you want to get some exercise, walking or running around an indoor track is where it's at. Our gym also happens to allow two hours of childcare, so it's a win for all parties involved.

I went there a few days ago: Jacob was at Pre-K and Josh was happily playing in the child center for a few minutes. I went up to jog around the track for about a mile or so.

Our gym happens to be a gathering place for 20somethings and people who seem to have no other purpose other than to work out and make sure their bodies look absolutely amazing. I know this because I once had those days. I call them my early 20s, when I lived in Florida, played beach volleyball, and worked out at the Y so much an employee asked me what I was training for.

So there's the fitness crowd. Then there's the older crowd: retirees who can run faster and lift more weight than me. More power to them.

There's the "mom" crowd, gathered into a few morning classes typically during the summer that I can never seem to attend anymore. All seemingly in better shape than me.

Then there's me. I size everyone up. Do you do this? It's probably not the best habit, but the gym is custom made for feelings of inadequacy or superiority. Last year, a Playboy model was arrested after taking a surreptitious photo of a woman whose body she deemed not fit enough for the gym.

I find myself making sure all my workout shirts cover at least part of my butt. I prefer loose-fitting tanks and tops. You shouldn't really think about this stuff when you're going to be athletic, but you do.

I don't know where all this comes from. Social media, probably, reality TV that distorts our version of what's real and what's not. An increased judgment of appearance in an image conscious world where people are loath to talk to a stranger.

I know, though, that it's toxic.

I grew up knowing the purity of exercise and athletics: it was about being strong and having fun, nothing else. I brought my blue glove to elementary school until the fourth grade, and I told everyone I'd be the first female major league baseball player. This is slightly embarrassing, but I wore men's sweatpants and a green ratty sweatshirt my dad found at the Lost & Found until my sophomore year of college.

For me I think some of it came with motherhood. The increased focus on what women can do to enhance our natural appearance, with the realization of irreparable changes to our bodies due to pregnancy and childbirth. Some of it came with adulthood: finally having (some) disposable income to think beyond 75 percent off at Target.

And then that's where you came in.

I was jogging, albeit slowly, around the track when I saw you walking. You were wearing an ergonomically correct baby carrier, with a sweet newborn strapped to your chest. You were walking mostly, but occasionally you'd pause to do lunges and squats.

I remember my first run post-first-C-section. My insides felt like jello sloshing around inside a washing machine. I'd never sensed my hips in this way before. I'd never had hips like this before.

When I saw you I remembered that day. You were layered up, too.

I remember feeling like whatever was soft now would never ever be hard again.

I remember thinking that I couldn't believe how tight this stuff that had once been big was.

I remember wondering who I was, if the person who I'd once been was irreparably changed.

I thought all this the second time while both of my children were being watched by others. And you were doing it with your babe strapped to your chest!

I watched you and thought how you were doing it all. Doing the impossible. The attachment parenting and the fit mom parenting. I thought about how incredible all of us watching you thought you were, and I imagined - maybe from your slight grimace and head down - that you didn't realize at that moment how incredible you were but instead lamented how much slower and weaker you were than you used to be.

It's pretty amazing that you're out here - your baby strapped to your chest - doing squats and lunges on a track in November when it's cold outside.

It's pretty amazing what we all do, what any of us do today, when women are expected to do it all - and not say too much about it. And risk being disbelieved and disrespected and shunned when we do speak up.

I'm saying something about it today. For you. For me. For a country that desperately needs our voices.

"I believe the women." 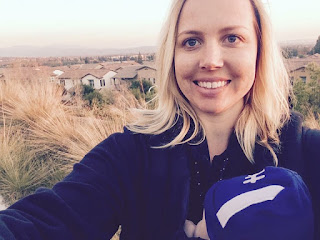 One of my first carrier walks with Josh