This week on the blog I want to lift up other writers I've been reading.

The best way to be a better writer is to be a prolific reader, and I may even follow that a little too much.

I spend a ton of time reading each week: I subscribe to the Washington Post, Los Angeles Times and my local Minneapolis Star Tribune online. I also get a daily email from the reader app Pocket.

Occasionally I want to share with you what I'm reading, and what I think it has to do with the Gospel story of Jesus Christ: his life, death and resurrection - and what the words of Jesus say in today's world.

This incredible piece from the New Yorker documents the long, sordid history of Hollywood film mogul Harvey Weinstein and the insidious ways he used his power and control to sexually assault women: from A-list actresses to young foreign models and waitresses looking for their first big break. Weinstein is twice-married, most recently in 2007 to Marchesa fashion brand co-founder Eve Chilton Weinstein. He has five children.

The most disgusting part of the Weinstein saga for me is this - and there's a lot of disgusting material and fallout to choose from - but Weinstein used power and control to force physical intimacy. For the women he abused and assaulted, he forever marked intimate physical acts with fear, desperation, terror and pain. Never again will they be able to be physically intimate with a loved one without remembering the pain of forced physical intimacy.

We can show love through physical contact: hugging, kissing, cuddling. I cherish all of the above not only with my husband but with my two boys, ages 5 and 2. I'll be sad when they don't want to hug mommy anymore.

Weinstein broke that connection. He did it for greed, for selfishness, for power, for narcissism.

I keep thinking of this Bible verse when it comes to Weinstein:


If any of you put a stumbling block before one of these little ones who believe in me, it would be better for you if a great millstone were fastened around your neck and you were drowned in the depth of the sea. Woe to the world because of stumbling blocks! Occasions for stumbling are bound to come, but woe to the one by whom the stumbling block comes!

Traditionally we believe Jesus is talking about children here, but I believe the term "little ones" can also refer to those who are lacking in traditional power and respect. In 21st Century America, this can include people who don't occupy traditional seats of power: primarily white men.

The actresses who met with Harvey Weinstein were "little ones" compared to the amount of power and prestige he had. Even A-Listers feared his reach: that he could limit their ability to work and provide for their families. He had such power and influence and he used it malevolently, to destroy the lives and the dreams of those who did not have the power and influence he did.

It would be better for Harvey Weinstein if a great millstone were fastened around his neck and he were drowned in the depth of the sea. Woe to the world because of stumbling blocks!

This is a quick read that proves my previous point about women lacking the power and prestige that white men are often automatically conferred.

Klobuchar told The Hill that people often call her Mrs. Franken. Or they ask her to take photos of Franken -- never realizing their senator is standing right in front of them.

As a female pastor, I don't know anything about what it's like when people assume you're married to your coworker, or you wouldn't be in this position of power ... (see that time in 2015 when someone told me my "husband," also known as fellow church pastor and almost 30 years my senior, did a fantastic job leading the Christmas pageant) ...

In case you think all is lost this week and people are terrible and fires continue to devastate my beloved former home state of California ... read this piece in the New York Times to restore your faith in humanity and remember the meaning of love: hint: WATCH THE VIDEO!

A 92-year-old Holocaust survivor, Klara, jumped from a train headed to Auschwitz and escaped to Belgium with her husband. She left her dying father on the train, and she didn't get a chance to tell him goodbye. For years she tormented herself. How could she leave her father?

Then on the street in Tel Aviv, Israel, a stranger approached her.

"I was there when your father woke up. He said:

You have to tell my daughter. I am the happiest father in the world. I am so glad you jumped.

And then I was crying the rest of the video.

Because he got it. He got love. That scary, spine-tingling love that we sometimes glimpse in ourselves. That love that God has for us because God knows that love means losing a bit of yourself and letting another person fully be whoever he or she is meant to be.

Klara's father gave her that gift. A love that didn't consider himself but a love that set her free.

It's so beautiful. There's hope yet.

Happy Thursday! I'll be back on Wednesday with another blog, post-2-year-old birthday for my little Joshua. 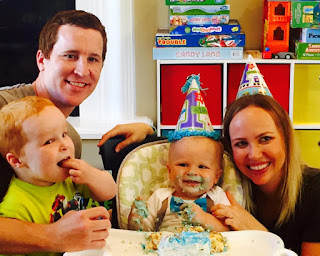 How was this a year ago?!