How the Nashville Statement erases Jesus

On Aug. 29, a group of American Evangelical pastors and leaders put out a statement they innocuously called: The Nashville Statement, for the town it was written in.

Like an old country song, it was sad and tragic with a touch of folksiness.

Unlike an old country song, it had no respect for God.

This morning I watched videos of brave people in Houston paddling kayaks and operating speedboats in waist-high water, rescuing babies and seniors and puppies and entire families from one of the most horrific hurricanes in recent American history.

The gallantry in these images reminded me, at a time when America needed it most, of what our nation can be. The most frequent rescuers are a ragtag band of salty men and women called the Cajun Navy, a completely volunteer group from Louisiana who started up after Hurricane Katrina. 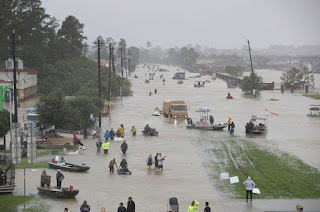 In the stories of Hurricane Harvey, Southern whites, Latinos, African Americans, Chinese immigrants -- everyone had a story and everyone wanted to help. The ugliness and division of Charlottesville could not defeat the will of average Americans to reach out and help - love - a neighbor.

Watching it, the rescues as well as the tragedies - seeing firsthand how hurricanes impact everyone, but money makes it easier to recover - I realized the capacity of human beings to love, to risk for one another, to empathize with one another. It is the image of God within us all.

And then I read the Nashville Statement, and I realized that America's most prominent Christian voices have forgotten about the incarnation: that God became man and dwelt among us. They don't see the image of God in their neighbors; perhaps they don't even see it in themselves.

Jesus? Well, he was nowhere to be found.

The Bible says "perfect love casts out fear," (1 John 4:18), but the Nashville Statement was full of fear. Perhaps that's why these Christian leaders chose to release it in the midst of a hurricane. Rather than mobilizing their massive congregations and followings to serve the neighbor in a time of tragedy, they hunkered down. They figured this must mean the end of the world was coming, that they were sinners in the hands of an angry God, and so they must point the finger away from themselves and onto the world's greatest sinners: women and homosexuals (their wording not mine).

It is a sad, defensive crouch for a once great American Evangelical tradition. Backed into a corner, they rely on the same scapegoats that they have for years. They quote not Scripture or theology but outdated medieval terms, meant to stoke fear and judgment:  "polygamous" "immorality" "homosexual" "the Fall" "eunuchs." In fact, the first time the document mentions Jesus, in Article 6, it quotes him about eunuchs, saying that Jesus was referring to anatomical differences. This passage is from Matthew 19, and it is in response to a Pharisee asking Jesus about the right of a man to divorce his wife. In Jesus' time, most likely as in some countries today - India just changed its law - men could divorce women as simply as saying "I divorce you," three times. Is it so farfetched to believe that rather than going into the details of physical human anatomy, Jesus is here instead defending the personhood of women - that divorce cannot be entered into only from one side, with simply a matter of words?

But these theologians and pastors who wrote the Nashville Statement would be loath to take a woman's point of view. Notwithstanding the women who have signed this document, the group as a whole who published the Nashville Statement is the Center for Biblical Manhood and Womanhood (CBMW), again an innocuous sounding group, which was nonetheless formed in 1987 to "staunch the spread of Biblical feminism in evangelical circles," according to Dartmouth religion professor Randall Balmer.

Make no mistake heterosexual Christian women. This document is not just about our LGBTQ brothers and sisters. It is about us, too, yes, even those of us who are married mothers. The CBMW is a proponent of complementarianism, a nicer-sounding way to reiterate the belief that men are in charge and women must be submissive.

In Article 12, the Nashville Statement begins to use the word grace. They must have figured they had to get it in there somewhere. In fact, they use the word "grace" four times in articles 12 and 13.

They keep using this word "grace," but I don't think it means what they think it means.
Grace, for the writers and signers of the Nashville Statement, is sort of a stopgap. When all else fails, then maybe try mixing in a little grace. And it's finite. Just enough, just a little.

They seem to want to imprison Grace. They put "grace" inside of an awkward prepositional phrase, never letting it stand on its own. They say: "the grace of God in Christ," each time they mention grace, as though they can't quite conceive of God letting grace go on its own, as God did in the incarnation.

The writers and signers of the Nashville statement don't seem to realize what God did in the Incarnation, when God in Jesus came to earth in the form of a man, to live and to die as a human being. God did more than Arya Stark, ripping the face off another person and impersonating someone else.

God is not a Faceless Man, God is the One who loved the world so much that He gave His only Son, so that everyone who believes in him may not perish but may have eternal life.

When Jesus died, God died. When Jesus suffered, God suffered. The consequence of the Resurrection is not just everlasting life but also a new relationship between God and every single human being, based not on punishment and judgment but on grace and love.

These prominent Evangelicals have forgotten John 3:16, much less the entire Bible and the words of Jesus Himself.

Jesus never talked about manhood or womanhood, much less about gay marriage. Instead, he showed us how to be truly human, the foundation of which is humility and self-examination. Perhaps because of their great fear, the writers and signers of the Nashville Statement were searching quickly for other sinners because perhaps in their own hearts they had not accepted the Grace that God offered the world in Jesus on the Cross. They couldn't conceive of God being big enough to save the world; because rather than finding the image of God within themselves, they searched for the image of themselves in God. Not surprisingly, God looked and acted a lot like them.

Here's the thing. In many ways, in how I read Scripture, how I live my life, the tenets I raise up: I am an Evangelical. I want to follow Jesus. I want to love God and love others. I want to share the Good News about Jesus with everyone I meet.

But Evangelicals don't seem to be much about evangelizing anymore. There is no good news.

Instead, I find the scariest part of the Nashville Statement at the end, in the final article.
It's meant to be a final summing up, a return to the sovereignty of God and a clinging by these pastors to some belief in some higher power, despite how far they've fallen and how full of fear they are today. Still, their true orientation shines through.

At the end of the AFFIRM section, they write: "... forgiveness of sins and eternal life are available to every person who repents of sin and trusts in Christ alone as Savior, Lord and supreme treasure.

That word: available. It's tantalizing. God's grace is available, if only you ...

But Jesus doesn't talk about God being available. Jesus says, "I am the resurrection and the life," (John 11:25).

The Apostle Paul writes that God told him: "My grace is sufficient for you, for my power is made perfect in weakness," 2 Corinthians 12:9.

Grace is enough. The Evangelical leaders know the song, but do they believe the words?

A final word stood out to me in the final article of the Nashville Statement. The writers refer to Jesus again as: "Lord." Truly, Jesus was called Lord quite often throughout the New Testament. This was a purposeful affront to the Roman government. After all, the Greek word used in the Bible is "κύριος" and it's used in the same way we might use the term "master," "owner," or "boss." It connotes worldly ownership, authority and possession.

American Evangelicals have acquired much ownership, authority and possession over the past 241 years. They've sought power, influence and money, ostensibly to promote moral goods such as anti-abortion Supreme Court justices or religious freedom laws.

But in their pursuit of power and influence, Evangelical leaders have lost their soul. They've lost the Biblical subversion in the term "Lord," and instead they've come to see their Savior Jesus as just another worldly master and property owner, one handcuffed by culture and biology, and limited by lack of grace, except when it comes to white, preferably wealthy, heterosexual men.