I will be honest, I'm not a big "statement" person.

Maybe it's related to my days in newspaper journalism, when every day would consist of countless emails of public relations "statements," written by public relations professionals, purposely void of colorful language or anything that could spark controversy, interest, or deeper truth.

As a Pastor, I've carried on my suspicion of the import of statements, even those coming from the central office of my own denomination.

Statements can often lead to more confusion and resentment. There's never a way to include all the necessary voices. Too often statements are watered down, with too much input by lawyers or people worried about who might be upset.

So most of the time, I come to the conclusion that signing a statement will do more to make me feel good than it will to actually help the issue I'm signing a statement about. It's relatively easy to make a statement or sign a statement; it's more difficult to do the work of love, justice, and transformation that I believe all those who want to follow Jesus are called to do.

Today, though, I'm planning on making an exception.

I've spent much of the past seven days examining exactly what happened at the U.S. Capitol on Jan. 6, when a violent mob rushed the nation's Capitol in an attempt to overthrow and stop the certification of the democratic presidential election in America. As of today, six people have died and many more were injured. The President gave a speech shortly before the attempted insurrection and asked his supporters to take back their country with strength. They responded in kind.

Many writers and researchers and law enforcement officers will be needed to fully investigate what happened at the U.S. Capitol and how not only participants but government leaders will be held responsible.

As a Pastor, that's not my job. Politics aren't my job, either.

When I was ordained into ministry in the Evangelical Lutheran Church in America, I promised to teach and preach in accordance with the holy scriptures and creeds and confessions of the Lutheran Church. These scriptures are not American but instead grounded in the life, death, and resurrection of Jesus Christ, a Savior who proclaimed in his first sermon that he came to: "bring good news to the poor, release to the captives, recovery of sight to the blind, to let the oppressed go free, to proclaim the year of the Lord's favor."

There is no space in my ordination promises to put national identity above the call to preach the Gospel.

I bring all this up this week, because for white American Christians, there is at least one un-ignorable aspect of what happened at the U.S. Capitol on Jan. 6. A huge number of those who violently stormed the Capitol cited their "Christian" faith as part of the reason for their actions. Writing for Religion News Service, Jack Jenkins documents the inextricable connection of Christian groups and leaders to right-wing, white nationalist violence in America, especially over the past four years. 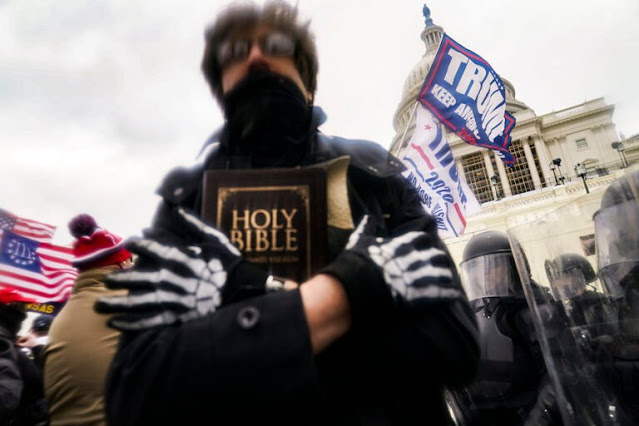 I began my book, Red State Christians, with my experiences at Dallas-area megachurches on Fourth of July weekend, and an explanation of the ways President Trump spoke the language of right-wing Christian leaders to make his way to the Oval Office. For many American Christians over the past few decades, there has been an intrusive blurring of the lines between Christian identity and American identity. This American identity, it must be said, is also assumed to be white. For many of these Christians, there is a fear that as America becomes more racially diverse, they will lose their power and identity. For Americans accustomed to living with white privilege (a result of generations of systems designed to benefit white Americans over Americans of color, such as redlining in real estate, unequal schools, and a justice system skewed toward leniency for white Americans), merely the idea of equality feels like oppression.

All white American Christians cannot ignore the outsized role that conservative white Christianity has played in right-wing violence of the sort that occurred at our nation's Capitol building on Jan. 6. It cannot be compared to protests for Black Lives Matter. This summer's Black Lives Matter protesters were protesting against the violent killing of George Floyd, who was unarmed, by a white police officer, a well-documented pattern in the United States where Black people are more likely to be killed by law enforcement, even when they're unarmed. Rarely are those officials held accountable. This is what brought protesters into the streets here in my hometown of Minneapolis and throughout the country. It was a movement for Black lives, organized by leaders schooled in non-violent civil disobedience originating in the Civil Rights era. Much of the violence connected or attributed to BLM protests was actually conducted by outside agitators or anarchists.

For this reason I have signed a statement of Christians against Christian Nationalism. It is critical for white American Christians to recognize how their commitment to being "Pro-Life" has been twisted upon itself to support power-hungry conservative politicians who would oversee the deaths of hundreds of thousands of Americans to a deadly virus, and find Christians risking lives to fill large worship auditoriums to satisfy the ego of power and fame-hungry pastors. It is critical for all of us who would seek to follow Jesus to ask how we have become so comfortable with angry and hate-filled rhetoric. It is critical for us to wonder where we have invested more into our national identity, money and power, and less into following Jesus, even when following Jesus causes us to be uncomfortable, vulnerable, or self-reflective.

For many Americans, the identity of Christian has become tied to intolerance, anger and parochialism. The voice of the Black church has long represented an alternative, for American Christians to side with the oppressed, and to fight for the rights of the marginalized. Millions of American Christians, from all corners of the country, have quietly kept on praying and doing the work of the Gospel. Too often their stories have been ignored, and their brand of Christianity marginalized.

And many of us have for too long attempted to find some kind of place of personal solace that does not require us to confront the broader trends in American Christianity. We focus on our churches: reports, Sunday school, Confirmation, budgets, charity work. We pray for peace and try to remain "apolitical." I am speaking here of those of us who Martin Luther King, Jr., may once have called "white moderates."

The recent events at the U.S. Capitol made clear that the claws of Christian Nationalism have dug deep into white American Christianity. And while not all of those who participated in the riot were conservative Christians, those of us who failed to point out how their actions conflicted with the Gospel of Jesus are complicit in the erosion of the Gospel in too many of our churches, and the idolatrous use of Christian rhetoric to prop up American power and right-wing violence.

The writer Lyz Lenz wrote this past week about returning to her former congregation in Iowa this past Sunday. She noted the experience of listening to a church service that failed to note the violence that had been incited by Christian Nationalist rhetoric at the U.S. Capitol. Those sitting near her in church laughed when the pastor said it had been a hard week - nothing more. Then they sang together, unmasked, and gathered for doughnuts -- talking about anything but the attempted insurrection and the lives that were lost. She called it the violence of white silence.

Christians across generations have been called to stand up and speak out when Christianity has been used to justify violence and injustice. I believe this week in our country is one of those times. I'm grateful not to stand alone.