Part of the most important work I want to do as a writer, a pastor, and a Christian, is in reading the work of others. I spend a lot of time each day reading, whether it's the Bible, news, history, or books. I don't often mention that reading in my own writing, though if you look at my past work, you can clearly see the important and essential influence of writers and thinkers who I admire.

Today as I prepared to share with you my weekly blog or prayer video and meditation, I came across an article so powerful that I wanted to devote my entire blog to it. I'll share a link below, and if you can't access it due to a firewall, let me know and I'll help you find a workaround (though I always try and support places that publish good writing if I can).

This article, written by the Rev. William H. Lamar IV, pastor of Metropolitan African Methodist Episcopal Church in Washington, D.C., puts to words so much of what has been on my heart for many months and years now. And perhaps what I appreciate most about his article is he not only boldly and powerfully calls out the truth of what ails us, but he also provides a possible framework to create a new, truer, more just reality, one grounded in the teachings and Gospel of Jesus.

I'm so inspired. As I said, I'll share the link below - and then I'll share some more brief thoughts from me on why I found it so compelling. 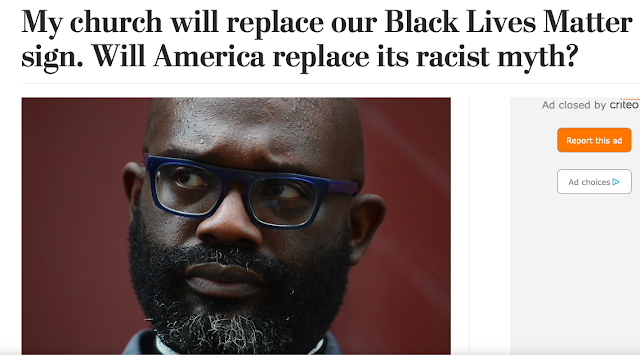 https://www.washingtonpost.com/opinions/2020/12/15/dc-metropolitan-ame-church-vandalized-blm-sign/
Pastor Lamar leads a historic Black congregation, founded in 1838 when most Black Americans were still enslaved. Metropolitan AME has been the site of funerals for Frederick Douglass and Rosa Parks. It has been witness to racial violence and KKK cross-burnings. It has stood for nearly 200 years and borne witness to America's greatest triumphs and most grievous sins.
This past weekend, members of the Proud Boys and other right-wing groups desecrated that history and filmed themselves tearing down a Black Lives Matter banner at the church, burning it in a scene too reminiscent of Black churches burned and bombed during the American Civil Rights era and beyond.
In response, last weekend Pastor Lamar tweeted: "We have not been distracted by signs, sounds, or fury for nearly two centuries. We worship. We liberate. We serve."
These were the words of a wise and focused leader, determined to protect and honor his flock.
He expanded further in the piece I link above. He begins, powerfully, by referencing a commonly known American Christmas carol: "Do you hear what I hear?"
And then he lays out the truth, "I hear the imperial American myth in the throes of its own death rattle. And I hear a people clamoring for a story by which to order their lives."
In the rest of his extraordinary article, Pastor Lamar unsparingly proclaims the deadliness of an American myth that too many of us have lived by for far too long. The myth of American power as only benevolent and just ignores the suffering of too many in our midst. We have yet to repent for the sin of slavery. We have yet to repent for the continued disenfranchisement of women. We have yet to acknowledge the ways that our nations consumes and kills its poor and sick.
Pastor Lamar claims, rightly I believe, that the most worrisome and also potentially correctable element of what is happening in America has to do with the story we are telling ourselves about ourselves, as Americans and as Christians.
In my research on American Christians across America after the 2016 election, I became convinced of the same truth Pastor Lamar shares from his perspective as a Black church pastor in Washington, D.C. I too am convinced that the story we've told ourselves about America is failing all Americans. I believe that for many Christians, especially white Christian Trump voters, their political beliefs reflect an exhausted and desperate response to a national narrative that no longer rings true. Trump offered nihilism and anger in response. Lamar offers instead hope, with the wisdom and ancestry of a people long oppressed by this nation's government, yet a people who have also often reflected the best of what America could be, helping write a new, truer narrative about America.
Contrary to worries that restructuring the American narrative would weaken America or lessen its power in the world, Lamar's insistence on a new narrative offers an opportunity for a narrative that is both more inclusive and more true, for everyone involved.
This Christmas, even as some of his words are likely hard for many of us to read, I draw hope from so much of what Pastor Lamar writes, again, in response to the desecration and threat to his congregation and his church building. As Jesus commands us, he chooses mercy, hope, truth, and love.
Among other powerful lines, he writes this: "What we must do is the hard work of creating this new narrative - one that tells a true story of humans thriving together and sharing the abundance of the land and their labor."
We have done this. We can do it again. This is the work that I so desperately want to do as a pastor, a writer, and a follower of Jesus.
I want to close with these powerful words from Pastor Lamar:
One God is for all. The other god is for some. One God has chosen humanity. The other god has chosen whiteness, imperialism, and human subjugation.
The men and women who founded the African Methodist Episcopal Church knew and were known by the God of all people. Metropolitan is rooted in this theological vision that humankind is one family. There have been outposts of resistance to the god of white supremacy from the beginning. These institutions must lead the way toward a new narrative. And white-supremacist institutions must assume the role of student, not teacher.
The United States of America must abandon this god, this story, and the violence that flows from fidelity to the same.
A sign came down on Saturday. Metropolitan will replace the sign.
Will the United States replace the story that makes such acts of desecration inevitable?