It's way too early to draw any sort of lasting conclusions from this week's U.S. elections. Many votes are still uncounted; many essential voices have yet to be heard.

I wrote a whole book based on Christian voters in 2016, and I'm still figuring out what that research and those results mean four years later, so I write this knowing that much knowledge is yet to come.

Still, I remain a believer in two things: 1) the possibility of learning; and 2) the ongoing revelation of the Holy Spirit.

Out of necessity, in everything from baseball to baby-rearing, we've become overly reliant on technocratic solutions, believing nearly everything to be quantifiable. Democrats in particular (and this was certainly true of Hillary Clinton's campaign; less so for Joe Biden's campaign) are guilty of thinking about elections in terms of measuring out and adding or subtracting demographic groups.

This type of election analysis has created a huge cottage industry of pollsters and lobbyists and pundits, most of whom treat vast swaths of the country as data points to be fed into equations. But as I learned in my reporting for Red State Christians, every data point on a pollster's map represents a unique human being with a unique history, relationships, and emotions.

Just as the "Red State Christians" I interviewed after 2016 refused to be placed into solid demographic boxes as a monolith of data, so too do American voters deserve the opportunity to be treated as human beings and not demographic groups. That kind of shorthand has a purpose, but it's been overly used in American politics and has led to some legitimate frustration for voters (like, I would argue, in Appalachia; or like many Latino and Asian voters) who don't fit neatly into demographic boxes corresponding to partisan allegiance.

Yet again we Americans have a close, bitterly divided election that seems incomprehensible to both polar ends of the political spectrum. And at the same time those of us who live and work in families and communities that aren't politically homogeneous know in depths of our souls that while we might disagree fervently with those on the other side of the aisle, we will also refuse to ignore the fact that they exist.

And that they too are human beings.

In the age of data and algorithms and mass American death due to a global pandemic, I am witnessing a troubling trend of dehumanization that enables an ugly and destructive callousness toward our neighbors.

As Christians, we must battle against this callousness and this dehumanization, of the living and the dead. We must pull apart statistics to see the mothers, fathers, sisters, brothers, children, siblings, friends, workers, grandmothers, and grandfathers behind reams of data.

We must find a way to blend of technocratic knowledge with the knowledge that dwells in the heart and, as the ancient Greeks, put it, in the gut. Reclaiming that humanity could begin with each of us reclaiming the faces and bodies behind each and every single vote, and the human being that vote represents.

Human beings, not statistics, are the building blocks of this nation. They are not easily definable. Their ethnicity or their race or their sex or their age or their education or their wealth will not always determine how they vote. Their biggest influences will never be charts or stats or ads. It will always be the ones they trust: their family, their friends, and their fellow human beings and Americans. Might we work to rebuild that trust in one another. 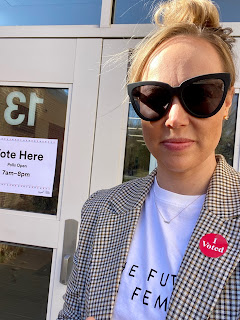