Every year on Veteran's Day, I think of my Grandpa John. Just 17 years old when the Japanese bombed Pearl Harbor and the U.S. entered the war, my Grandpa bade farewell to his then-girlfriend, my grandma Millie, and he was sent off to war. They'd be married when he returned, on a weekday in their small hometown, with scores of other war brides and grooms.

Tens of thousands of miles away, lands to which he'd never traveled from his small, rural Midwestern home, he landed on the Pacific Front. Shortly after his battle begun, he was shot in the stomach and airlifted to Australia. My grandma waited, and she wrote letters, and she worried.

His was a tale of bravery, courage, and pain.

Once a Marine, Always a Marine.

Once a veteran, Always a veteran.

One Veteran's Day past, after serving the summer at the Veteran's Hospital in Minneapolis as a chaplain intern, I drove to Fort Snelling to see my grandpa's white gravestone, in rows upon rows of military dead.

I felt heavy in my chest my tiny connection to the preservation of democracy and the defeat of Nazism, the liberation of the concentration camps. Our triumphant American narrative glosses over our own shortcomings, this the veterans themselves know and have always known as they nonetheless risk their lives for something bigger than themselves. Because of them we get more time to form a more perfect union. Because of them the world haltingly moves forward, two steps forward, one step back, against tyranny and injustice and genocide.

Every year on Veteran's Day, I think of my father-in-law. Thirty or so years after my grandfather left his small, rural Midwestern town, hundreds of miles to the south my father-in-law left his Missouri farm town to fight for America in Vietnam, the last war in which Americans were drafted.

He came back with medals, including Purple Hearts, and shrapnel in his knee, and we don't talk much about what happened there. His is not my story to tell, but his honor, his courage, and his sacrifice are part of my family's story on this Veteran's Day.

This Veteran's Day, in a year beset by global pandemic and political instability, I find myself thinking about another veteran in my family. He died almost 57 years before I was born.

Peter Jacob Ganzer, Jr., was my grandma's father on my dad's side. Like the rest of the family, he was of German heritage. His grandfather, Jakob Ganzer, left Germany at age 19 to try his luck in the Promised Land, about 20 years before America would descend into Civil War. He lived for awhile in New York City and was a member of the Armed Guards of New York state. At age 42, he came to rural Minnesota, to the county of what is today St. Cloud. After serving briefly as part of the military there, he later built a log cabin in a rural area of the county and finished his life as a farmer, despite losing four of his toes to frostbite while bringing supplies back to the farm.

His son, Peter Jacob, Sr., was born in New York but lived his adult life in rural Minnesota. He'd marry a woman from a nearby town, and he died at age 48 after the couple had eight children. My great-grandfather, Peter Jacob, Jr., was the fourth.

His father had died when he was just 18, and seven years later, at age 25, he'd be summoned back to Germany to fight for America, against his not-so-distant relatives, in World War I.

I've wondered what it was like for Peter Jacob, Jr., to travel so far from home in a time when automobiles and electricity were still new inventions.

If you wander the graves at the cemetery where Peter Jacob, Jr., and many of my relatives are buried, in that small German Catholic town in rural Minnesota, you'll notice that many gravestones were still written in their native German. Many people in town still spoke German when Peter Jacob, Jr., was sent overseas to fight for America against Germany. I wonder how brave and how afraid he must have been, and how scared his wife, my great-grandmother Susan, must have been as well. She was just 21 when he went to war. I'm not even sure if they were already dating or married when he was sent away.

But Peter Jacob, III, would never know his namesake father, because my great-grandfather, Peter Jacob, Jr., World War I veteran, would lose his life just 10 years after returning from war. I've been told by relatives that he suffered from ill respiratory health due to inhaling mustard gas on the Western Front. That his lungs were never the same, and when he died at age 35, the official cause was pneumonia, maybe beginning with a flu, likely complicated by chemical weapons used against him by his ancestral homeland.

A few years after Peter Jacob, Jr.,'s death, the family would suffer another crisis when they lost their home in a house fire. It is only by sheer faith, will, and perhaps the power of God, that Great-Grandma Susan kept their family together. Because of her, and because of the kindness of others in the community, my family survived despite my great-grandfather's early death.

I'm thinking about my great-grandpa Peter today because I'm realizing how close so many of us are to the wounds of war this Veteran's Day, even as so many of us feel far away, at a time when our nation's military is increasingly set apart from everyday American life.

Today I tell my great-grandpa's story, and my father-in-law's, and my grandpa's, to remind myself and all of us that the price of our freedom and the cost of war runs in all of our blood. It certainly runs in mine. As I think of what it cost to protect and defend our democracy. And as I think of the courage and selflessness it required of my Grandma Millie, as she waved goodbye to her husband, setting off again to World War, as she knew the first World War had taken her father away when she was only 3 years old.

Throughout this country's relatively short and complicated history, ordinary Americans like your family and like mine have chosen again and again to sacrifice their well-being, even their lives, for the freedom and promise of this country. It would be lying to say that their sacrifices have not taken their toll on millions of American families, again like mine.

But this Veteran's Day, it would also be lying to say that their sacrifices have been in vain. They have not. One-hundred-and-two years after that first Armistice, when Peter Jacob, Jr., swept my great-grandmother Susan up in his arms and promised that the war and the pain would not have the final word, their descendants bear witness that my great-grandfather's bravery, courage, and pain made a lasting impact on my family, and on our defense of his chosen nation. 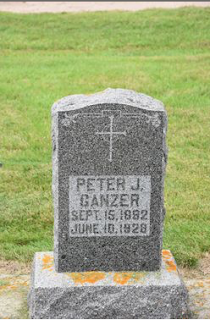 My great-grandfather, a veteran of World War I
His grave at Saints Peter and Paul Catholic Church Cemetery
Richmond, MN
To my dear family members, please feel free to correct any details I may have transcribed incorrectly in this story. I am grateful to share our ancestry together.