The Endurance of Love

My second grader's distance learning teacher recently told us over email that key to his perseverance over the course of the pandemic was his past as a cross-country runner in high school.

We'd all been muddling along with online school for four months, then, counting the end of the 2019-2020 school year, and I felt like anything but a marathoner.

"I was a sprinter in high school," I thought, and I only joined distance workouts occasionally to sneak off with my friends and "get lost" on a long run that sometimes took us to Dairy Queen.

Maybe that's where this all falls apart. I didn't have enough endurance. Each day straggled into the next. I taught Bible Study wearing a mask, worried the whole time about vulnerable participants.

I screamed silently while watching high school kids practice contact sports at the park across from our house, while adults drank beer at the bar across the street. Trust me, I thoroughly enjoy both sports and beer, but why is it our last national priority to try and get young kids back in school?

I told you my endurance was running out. I was never meant to be a marathoner, in running or pandemics, and yet here is the role I've been given to play.

I watched the U.S. Presidential Debate last night and I guess I'm still horrified. Still shaken by the President's meanness and aggressiveness, alongside any lack of commitment to make lives better for everyday Americans.

I remember when debates and politics used to feel like regular sport, not blood sport. My brother and I played a board game called Landslide growing up, where you'd have to "Win Votes" and claim states on your way to the presidency. It was more fun back then.

My 8-year-old asked me why they have debates and I said because candidates used to respect each other and talk about the issues. Make no mistake, the lack of respect flowed one way first last night, and it bloodied the whole river.

When politics is a blood sport, everyday Americans like you and me who are just trying to manage online school, pay our bills, and figure out how to afford health insurance, we lose. We lose every time. I hate losing. I wasn't built for this race.

The temptation when this happens is to lie to yourself so you can survive. To pretend we didn't really see what we saw. That things weren't that bad. Lying to yourself is a form of survival. But my eyes can no longer unsee what they saw.

This morning I tried listening to a book about unity, written by conservative economist Arthur Brooks in March 2019. He talks about a moment where a Black Lives Matter leader was invited to address a crowd of Trump supporters at the 2017, "Mother of All Rallies," attended and organized by several far-right groups, including the Proud Boys, whose neo-Nazi leader, Jason Kessler, organized the deadly Unite the Right rally in Charlottesville, Va., in 2017.

Brooks begins the book with an anecdote he shared at Harvard that later went viral on social media. Brooks goes so far as to share the number of views his video got, reminding us that in today's America, it's only "real," if it happened on social media, at least according to too many of those who lead America as politicians, media members, and those who count themselves among our country's most powerful people.

I have spent much of the past four years dedicated to the kind of work that Brooks wants to do in his book. To defeat the "culture of contempt" and encourage Americans to choose relationships over ideals and anger. I do believe it's possible.

But listening this morning, Brooks' prescription rang hollow. The cheering crowd united then in D.C. would be replaced by protesters in the summer of 2020 risking Covid to make the audacious claim that Black Lives Matter. They'd be teargassed by the President himself this time, to clear a path to a church, so that a place of worship of a crucified Savior who sought to free the oppressed would be used as a talisman and altar to political power and brute strength.

Covid ripped out the ground beneath our feet. We all stood teetering together. Unity was further away than it had ever been. Blood had been shed and continued to flow. The truth was elusive and covered up at every turn. The shouting of the debate echoed in my ears. The shaking heads of white men who had ruled for so long.

What, if anything, would, could endure in 2020 America?

Only two words echo in my brain from last night's debate, rising above the cacophony and anger and lies.

President Trump and former Vice President Biden were talking about something, I can't remember what, some mixture of a half-heartedly asked question from the beleaguered moderator, Chris Wallace, a shouted stream of epithets from President Trump mixed in with accolades for himself and his administration, and then a hesitant response from Biden, who occasionally turned away from the debate and talked directly to Americans.

Trump has always had an uncanny knack for hitting people where it hurts them the most. He says the insults you think up in your head and then decide against because they're too cruel, too personal. Trump has no such qualms.

In 2016 many saw this as refreshing. In 2020, in the midst of an unending global pandemic, the taunts seem harsher. Any subtext of mirth has gone away. Both men were tired. The moderator was tired. The viewers were tired.

Trump moved in for another attack, this time referencing Biden's son.

"My son?" Biden responded. "My son?" (these quotes are based off my memory and may not be verbatim)

He mentioned his son, Beau, an Army veteran and Bronze Star recipient who'd served as Attorney General of Delaware before dying of brain cancer in 2015 at age 46. Beau Biden's death was cited as one of the principal reasons why Joe Biden didn't run for president in 2016.

"No, I don't know him," Trump sneered. "I'm talking about your other son, Hunter Biden, who was dishonorably discharged because he was on drugs."

Biden looked stunned in that way he does sometimes, a stare that's been used to much ardor in Trump's 2020 ads. But this stare wasn't a vacant one. It was a stare of shock, and you had to wonder if in those few second Biden was traveling back in time to the car crash that killed Hunter and Beau's mother and Joe Biden's first wife, Neilia.

When you've gotten that kind of news before, when the one you loved dies too soon, without warning, you remember that feeling and you can go back there again and again. It's like when people ask where you were, how you felt, on the day of 9/11. But worse.

A few seconds later, he'd turn to viewers. He'd admit that his son suffered from drug addiction, and it was hard, for them both, but he still loved his son. Many of us nodded silently. No matter our politics, so many us knew how that felt, to love and to lose and to suffer in the midst of familial addiction. That was not a political shot worth taking. Addiction was so much weightier than politics, beyond it somehow, like families used to be. Maybe that's why Biden kept laughing last night when he must have felt, like the rest of us watching, like screaming. He'd already had so much taken away from him, and he had lived anyway. Loved anyway. Somehow, life had gone on.

I am the mother of two sons, and it has changed me in irrevocable ways. I can no longer watch shows where children suffer. My oldest wanted to watch Titanic last weekend and when the children were tucked into bed the night of the sinking ship, I had to turn on my phone and shut my ears. I was newly sensitive. I understood what it meant when they said becoming a parent meant your heart would walk around outside your body.

It was an anguished cry, and in it I heard the echoes of King David, thousands of years ago saying these same words when they told him his son, the interloper and usurper, the traitor Absalom, had died.

King David had every right to be angry with his son, to rejoice in his own victory. But instead the bonds of love endured instead, and it was painful.

Through war and a struggle for power, what endured for David was love. It would have been less painful if hatred had endured. Then he could only be glad, that he had defeated his enemy, that the relationship with Absalom was voided. But instead love had remained, and it hurt, and David could only groan and weep and wrack his body over the edge. 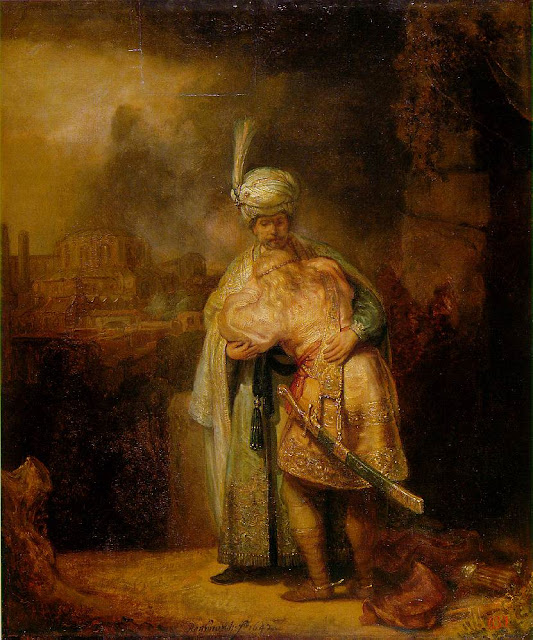 The Reconciliation of David and Absalom, by Rembrandt van Rijn, 1642

Jesus tells another story, a happier story, about sons. In Luke 15 he tells a parable about a man who has two sons, and they sound a little like Beau and Hunter. The older son is responsible and noble; the younger son throws away his birthright and squanders his name.

This time, it is not too late for the father, however, as it was for King David. In Jesus' kingdom, the opportunity for forgiveness comes first. The Prodigal Son returned home. The father rejoiced. Love endured. It was painful and sharp and imperfect because this is the life and the love that we know in our families and in our God.

I write all this not to comment about who I will or you will vote for next month in the U.S. Presidential Election. I am not one who finds much value in taking overtly partisan stances.

I write it instead that we may each find these words and the endurance of this love in our own hearts, as we stand knee-depth in the rising waters of pandemic and wildfire and economic hardship and national acrimony and anger.

I am not a distance runner. I will never endure on my own power. I will always falter, collapse, disintegrate into fear or anger or resignation. Kneeling with me in those very moments, however, is the enduring love that could set us free if we let it.

I do not have false illusions of a grand national, pain-free unity as depicted in so many dreamy articles and videos that get, as Brooks reminds me, several million shares.

As a follower of Jesus, I know that this enduring love dwells in the midst of pain and death, not Twitter, Facebook and Instagram. It stands there in the breach and the quiet of forgotten American cities and towns, waiting, for words of repentance and forgiveness and the work of justice.

When all else has gone, love remains. Sometimes, indeed, it is seen only in the smoky haze after a deadly, painful, national fire.