It's raining here today, but I can't stop thinking about the fires.

I lived in California twice, and I can still remember the burning smell in the air, the orange sky, the long line of cars snaking around the canyon, people desperate to get home and nowhere to go. Horns honking incessantly.

I remember families of firefighters, watching and waiting.

I remember the fine black dust in the air, sticking to your skin and your clothes.

Carbon Canyon was in flames just miles from our inland Orange County home, but when we got there we tried to forget about the ducks and the geese at the park, the circular grove of redwoods, and the hills that had turned brown and brittle in the August heat, kindling ripe for burning.

When I watch the videos of the fires, I remember hearing that eerie roar, lingering in the back of your throat.

This past weekend people were camping until the fire came near, or practicing football or just trying to escape the record heat. Then they had to run down the mountain with only what they had. Suddenly they were refugees, just like that.

Maybe we are all refugees now. We are distant from what is burning us, killing us, until suddenly, like a wildfire burning, it stands in front of us, howling, demanding our attention.

I began 2020 like most of you, with hopes to maybe lose some weight and save more money and meditate in the morning.

Instead everything changed. The world itself caught on fire. Millions died and are dying from a mysterious virus. I celebrated Easter service in front of a computer screen. My son started second grade in a Google Meet. My husband spent weeks in Memphis building an emergency hospital and wearing a mask the entire time. Beauty bloggers started hawking protective masks, not the ones you slather on your face for extra moisture.

My family and I live four miles from where George Floyd was killed in Minneapolis on May 25. Later that week, awaiting justice, peaceful protests coexisted with riots that turned violent. The flames were destructive and senseless and also somehow appropriate. Everything was burning. No one could think straight.

Four miles away, my family and I went on a peaceful bike ride. We couldn't hear the roar or see the flames until they would touch our lives. As white American Christians we had lived too long in willful denial. "Justice too long delayed is justice denied," wrote Martin Luther King, Jr., in 1963 from the Birmingham Jail. He wrote that he was quoting an eminent jurist, though no one knows who exactly. The phrase may have originated in rabbinical documents, or the Magna Carta.

King did not coin the phrase, but he had lived it, and 60 years later we are living it again. The poorest and most vulnerable die indiscriminately. Millions lose their homes, their jobs. Others wait it out on yachts; stylists visiting them behind the gates. Black Lives Matter. All Lives Matter. In America in 2020, neither line is a realized truth.

Flames, real and metaphorical, burst crowded at the gate, while we wait in interminable L.A. traffic, uncertain of where we're going, or why.

We all hear the roaring in the back of our brains, at night when you close your eyes in bed, in the morning when you set your child up in front of the iPad, or strap a mask around her ears, or sanitize your hands before you walk in to teach a hybrid class. Deep breaths everyone. Ignore the stench of smoke and burning creation.

This summer, in a fit of pique or denial, my family and I went tent camping. We managed to set up the tent and decided to start a fire. The wood was damp and we kept lighting our candle lighter over and over. Click, click. Click, click. The flames ignited in the kindling and then just as quickly went out, black smoke rising in the air.

Finally our friends arrived and we made the fire together, and it burned in the darkening sky. We sat around it, cheeks red in its warmth, staring into the flames licking the metal edges of the pit.

Human beings lived like animals until we made fire. We harnessed its power to stay warm and to cook and slowly we learned to build civilizations. We huddled together around fires and loved our lovers, home from killing each other with bayonets on the battlefield. We lit lamps with fire and wrote great manuscripts and studied germs and operations and taught children how to make letters with fountain pens.

Fire in itself was never good nor bad, it was simply fire. We briefly controlled it and we advanced together.

Now, we may have gone too far. Our plastic waste and fossil fuels have burned the atmosphere itself, killing marine life and polluting our oceans, though plastics never die. We are ushering in a new era of extreme weather, of extreme heat and aridness in the American West, and a new era of deadly fire. No longer a controlled burn, the fires rage.

Still others set fires, out of anger and unbridled frustration and injustice, and justice too long delayed.

And others set fires out of mischief, and a desire for chaos and greed and death.

Others shout fires of hatred and deceit with their words, and then they walk away, wiping their hands on their pants, as the fires burn behind them.

And others bring automatic weapons to the scene of the fires, and shoot bullets into them indiscriminately, feeding the fire and killing each other and deadening themselves until they can no longer hear the gunshots ring out.

On a cold day in the Upper Midwest, we lit our gas fireplace in our comfortable home and covered ourselves with fluffy blankets while we stared into our screens. Far away the fires bellowed. Closer and closer they burned.

What will we plant in their fields of destruction? 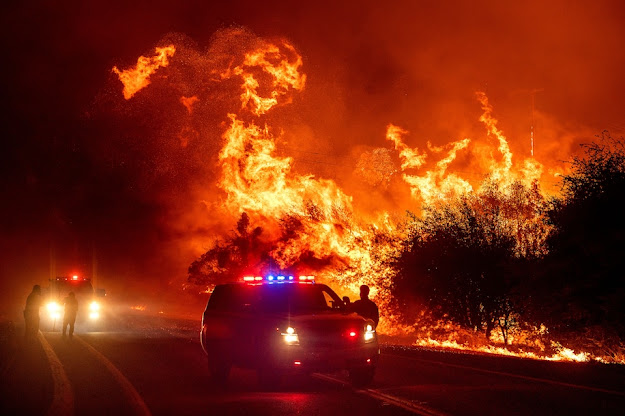