Don't get out of the boat!

This week, a great number of American churches and pastors will preach about a familiar Bible story: the tale of Jesus walking on water.
If you're a faithful American churchgoer, or even just an occasional one -- or even if you just listen to Christian radio every once in awhile or attended a Christian college, well, you've probably heard a popular sermon and interpretation of this text.
The idea goes like this ...
The story of Jesus' walking on water focuses on an interaction Jesus has with the disciple Peter, who will go on after Jesus' death and resurrection to be known as the Apostle Peter and the first pope of the Catholic Church. It is Peter to whom Jesus gives the "keys," calling Peter a "rock on which the church will be built, and the gates of Hades will not prevail against it."
That passage comes just two chapters after Peter's interaction with Jesus walking on water.
Here's what happens. In the midst of a terrible storm on the Sea of Galilee, Jesus' disciples look outside the boat and notice that Jesus is walking towards them on top of the water. His disciples were terrified and imagined he was a ghost. But Jesus told them, in the same words God always replies when confronted with human fear in the face of an encounter with God: "Do not be afraid."
Peter boastfully suggests that if it's really Jesus, that Jesus should call him to come out on the water. Jesus does, and Peter walks toward Jesus briefly, only to sink under the waves when he notices the strong wind and stormy water. Peter grew afraid, and he sank.
It is only by grabbing Jesus' outstretched hand that Peter survives. Jesus chides Peter for his lack of faith, but when the two return to the boat, the wind has subsided, and all the disciples worship Jesus.
That's the Bible story. Here's the popular American Christian retelling, popularized in a similarly titled book by megachurch pastor and Willow Creek alumnus John Ortberg, If you want to walk on water, you've got to get out of the boat!" 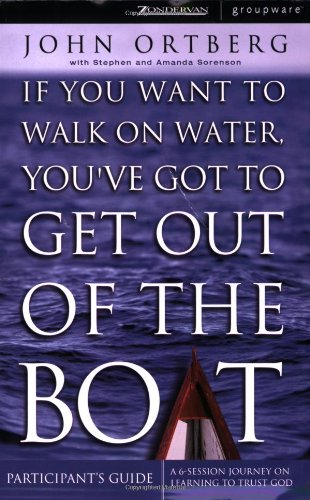