This week I have something special. I've begun doing regular blogging and serving on the Editorial Board of a great new organization based in Minneapolis called Church Anew. Those of you who read this blog don't always get access to those articles, so I decided to start posting them here on occasion, with a special introduction for this audience. Make sure to check out Church Anew's blog each day -- they've convened some fantastic, diverse, and thought-provoking writers that present a relevant and timely take on following Jesus in America today, and what that means for the Church (Anew).

My blog for Church Anew can be found on their site here. I wrote this blog in honor of some special women in my life, way too many to name here, but I especially wanted to lift up my mom, Claudia, and my grandma, Beryl. They've both always been advocates and feminists before their time, supporting the right of women to be athletes, independent thinkers, and preachers and prophets in their own right. I am proud to carry on their tradition in this blog, which explains why Christian values demand women's rights, instead, of as is too often the case, American Christians demeaning, oppressing, and even abusing women in the name of the Church.

This week, my grandma Beryl is leading a Zoom meeting about women's issues with her friends in her senior community. She still plays tennis and is as indefatigable as ever. Earlier this week, my mom shared with her the Highwomen song "Redesigning Women," which I sent my mom about a week ago. All three of us have been laughing and listening together this week, and my grandma is planning to share it with her group. In the midst of an uncertain world, and a week filled with grief and loss in my own family, I am grateful to stand with my mom and grandma and carry on our family tradition. 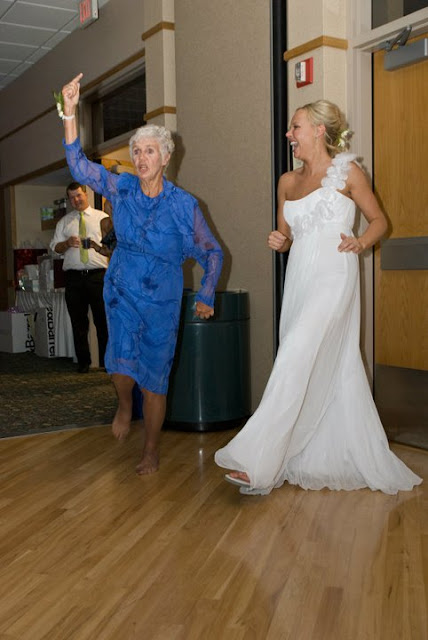 My grandma and I dancing an Irish jig at my wedding, with my dear friend's husband looking on the background :)
Here's the blog, originally posted on Church Anew:

This year, my ordination anniversary fell on the same day as the 100-year anniversary of the ratification of the 19th Amendment, which gave American women the right to vote, although Black women still faced great barriers to voting.

These two symbolic anniversaries, commemorating my role as a Pastor and faith leader, and my rights as an American female citizen, seem rarely to coincide. But this year, their being placed together on the same day seems worth reflecting on, especially as the role of so-called Christian voters looms ever-larger in the 2020 U.S. Presidential Election.

I would not be a Pastor if I did not believe Jesus had called me directly into this role, to devote my life to preaching the Gospel and helping people grow in their faith; to see Jesus’ words, witness, and life, death, and resurrection as relevant to their lives inside and outside the church. This is the conviction that led me out of sportswriting and the secular world of journalism and into seminary and life in the church, serving Lutheran congregations in Las Vegas, Chicago, Southern California, the Twin Cities, and rural Minnesota.

Still, many Christians continue to believe that because I am female, my call into ministry itself is anathema to their understanding of the Gospel. Many American Christians, including those I know and love, continue to subscribe to a theory called “complementarianism,” which states that men rule over women at the “head” of a family and society, and women should be silent in church: general instructions taken from a particular situation referenced by the Apostle Paul in his first letter to the Corinthians. I wrote about this three years ago and have preached about it several times in the past, so I won’t go into a lengthy exegesis here of why those Biblical passages should not be generalized in support of a theory of male dominance in American Christian circles, as they have been in much of 20th and 21st Century American Evangelicalism. For more on this, read here, here, here or my book chapter on Evangelical women here.

Male headship language has hurt men and boys, forcing men and boys to stifle their emotions and present themselves to the world in ways that are inauthentic and damaging. Patriarchy in the church has made it costly and daunting for men to share their emotional struggles and pain with the world, leading to a generation of male pastors who live with depression, sometimes even leading to death by suicide for a generation of Christian men who found themselves floundering and unable to live up to a false idol of biblical manhood.

Male headship language has also limited the prophetic and Gospel-centered witness of female preachers, pastors, leaders, and teachers. Men have not been able to benefit from Bible study and scholarship taught by women in churches. Female church leaders have been shut out from important leadership positions and networking due to the “Billy Graham rule,” which forbids men from socializing with women on a one-on-one basis. While this “rule” shut out strong female leaders from positions of power and influence in the church, it sadly did not prevent rampant infidelity and sexual misconduct among male pastors and church leaders.

With lack of exposure to female colleagues, too many male Christian leaders continued to view women as either mothering figures or objects of sexual desire, as evidenced recently by the scandal over Liberty University President Jerry Falwell’s Instagram account, and his liking of swimsuit photos of young women.

While female Christians like Beth Moore and Jen Hatmaker have large social media platforms and influence, most positions of formal leadership in American Christianity continue to be held by men. Thus, the American Church has been slow to own up to its failings of American women due to conservative doctrine about gender roles and male headship.

Even in my denomination, where women have been ordained for 50 years, female pastors still receive mailings for Mr. and Mrs. Husband’s Name, failing to use their title as Rev., even from church offices and organizations. Women who wear clerical collars are often stared at in public and asked, “Can I call you Father?”

The American version of Christian leadership continues to be predominately male and patriarchal, so perhaps it’s no surprise that women’s rights have never been lifted up as an important part of Christian values.

As a Pastor and a Biblical scholar and a theologian, I would humbly suggest that it’s time to change this.

We must first look to Jesus to see why Christian values demand women’s rights. Many of Jesus’ most important life experiences happened alongside women, such as his conversations with friends Mary and Martha, sisters to Lazarus, who Jesus raised from the dead. Jesus’ vision of his mission to the world was changed during conversation with a Canaanite mother who was desperate to heal her daughter. After his crucifixion, it is Jesus’ female friends and disciples (though they aren’t named as such by 1st Century biblical writers) who first come to the tomb and share the news of Jesus’ resurrection with the world on that first Easter morning.

In the early church, women like Priscilla, Chloe, Lydia, Apphia and Nympha led house churches. Junia is mentioned in Romans 16 as “prominent among the apostles.” It’s clear the Apostle Paul worked closely with many women in the early Church. But the American Church has instead chosen to prioritize a few cherry-picked verses about head-coverings and headship to silence and denigrate women in the church, instead of paying attention to the broad breadth of Paul’s ministry and collaboration with early Christian female leaders, without whom the church would not have survived.

Throughout the history of the global church, female mystics, religious sisters, writers, musicians, preachers, and revolutionary leaders have carried on Jesus’ work of redemption, liberation, and love. Widows were also singled out for special care in the book of Acts and in Paul’s letters in the New Testament. Widows continue to form the backbone of churches across America, sewing quilts, organizing food drives, teaching Sunday School, and filling up Bible studies.

But for too long, the American church has somehow seen women’s rights as contrary to the mission of American Christianity. Feminists are portrayed as asking for “abortion on demand,” and the debate over being Pro-Life vs. Pro-Choice in America has rarely considered the impact of forced birth or lack of contraceptive options on women’s health and flourishing. Meanwhile, America far surpasses other developed countries in maternal mortality; this is particularly striking for Black American women, who despite their vast contributions to American Christianity, are rarely lifted up or celebrated in popular American Christian culture.

As the 2020 election approaches, conservative Christians continue to speak about abortion and being Pro-Life as the only reasonable position for Christian voters and values to take. Left out of the conversation is the idea that rights for women: the right to vote, the right to preach, the right to health care, the right to support for raising children, the right to equitable wages — these are all also important parts of Christian values. Jesus stated as such clearly in his first public sermon, recounted in Luke 4:18-19:

The Spirit of the Lord is upon me, because he has anointed me to bring good news to the poor. He has sent me to proclaim release to the captives and recovery of sight to the blind, to let the oppressed go free, to proclaim the year of the Lord’s favor.

For a Savior who spent so much time in the company of female friends and colleagues, and who witnessed the difficulty borne by his young, unwed mother - the idea that this mission extended to supporting the rights of women seems axiomatic.

In the United States, single mothers are dramatically overrepresented among our nation’s poor. According to the 2010 Census, nearly 30 percent of families led by a single mother lived under the poverty line. In the midst of the coronavirus pandemic, women and single mothers have continued to suffer disproportionately, asked to carry the bulk of responsibility for child-rearing while schools, daycares, and summer camps have closed. Poor women, many of them women of color, are also overwhelmingly employed in the essential caregiving work that puts them at highest risk to be infected with Covid-19. The health risks of pregnancy are too often ignored for women; so much so that the idea that a mother’s health is part of the abortion debate is rarely a part of discussions about abortion in America, especially among American Christians.

It does not seem a revolutionary idea to state that women are people too, in 2020 America. But too often, American Christians have viewed women as second-class citizens, somehow less worthy of human rights than men are. This is anathema to the witness and ministry of Jesus and to the witness of the Bible, which calls for special care and consideration for the poor and oppressed, who in America, are disproportionately women and mothers.

Too long have advocates for women’s rights in America been silent about the ways that Christian values insist upon rights and consideration for American women. This year, as my ordination date fell on the anniversary of women’s right to vote in America, I am compelled to no longer remain silent. Christian values demand women’s rights. Any Christian leader or politician who suggests otherwise is distorting the witness of the Bible and of Jesus himself.