In a world heavy with coronavirus-related pain, a piece of my heart has broken for graduates in particular.

There is something noble about graduation, a nod to the equalizing effects of education in a world too often socially stratified and unjust. Graduation reflects a protest against a world that insists it runs only on commerce and profit and output, taking time to honor history and literature and foreign languages, and caring for each other.

My heart has broken for all the graduates: for the 5-year-olds finishing preschool and donning tiny caps, for the middle schoolers, self-conscious and earnest, heading to high school in the fall; for the high school kids, representing hope for the future and renewing of our world; and for the college kids, taking nothing for granted, entering the workplace, carrying with them the knowledge and creativity our American workforce needs desperately. My heart has broken for the teachers, for the professors, for the adjuncts hanging on by a thread, for the Ph. D. students and T.A.s, and everyone who has protected school as a place unique in our profit-motive economy, as much as market pressures and politics threaten the American education system.

They did not deserve this: ripped unexpectedly from their classrooms and dorms, yanked from the safety and security of school into the unfamiliar environs of a pandemic, with parents ill-equipped to homeschool and work, with families who didn't expect their college students back home so soon, drifting from online class to online class, unmoored from their relatively new adult-like freedom, the full stress of the world held at bay by the kindness and skill of teachers and professors and campus staff.

They did not deserve this, robbed of the shouts and applause that would greet their accomplishment: a moment of grace before work and transition begin.  A party with a cake that had a frosting-painted picture of their face, graduation announcements sent to family and friends, Senior Night parties and prom and the last season of spring sports like baseball, and track and field, and tennis and softball.

Awhile ago, when we still didn't know how long this would last or how much our world would change, adults on social media amused ourselves by posting our own senior pictures in honor of the Class of 2020. It was unclear how this helped the Class of 2020, but it kept us all preoccupied and in a time of quarantine and fear, we needed that.

I didn't know what to do. I was still thinking about Easter and wondering when we could worship together in church again, and wondering if my son could play Little League or the younger one could ever return to preschool.

A month later, I finally ventured into our basement closet and pulled out my old high school yearbook.  Here are some gems for your amusement, including one particularly dorky shot. Thanks, friends from the Yearbook Committee, for making sure to add that one! 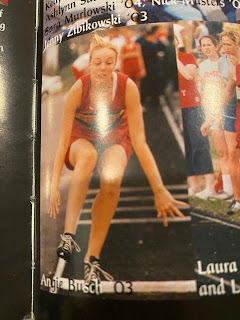 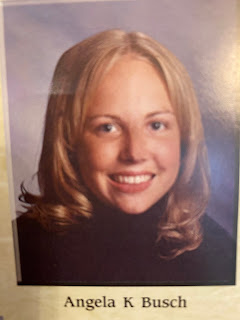 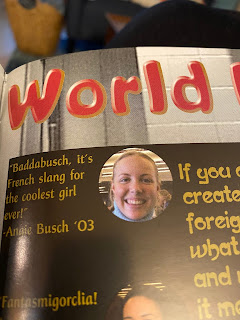 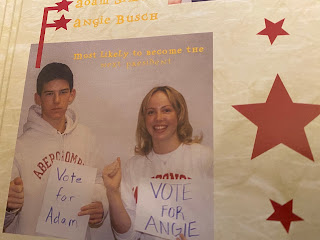 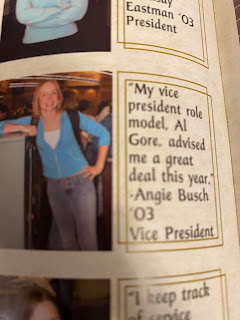 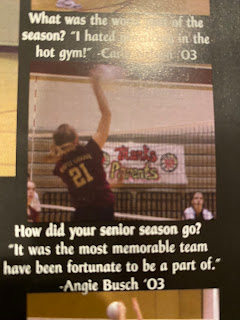 Sometimes we see the past in rose-colored lenses. When I look back at my yearbook and think about senior year, I remember the picnic we had with all our friends in the backyard at my prom date's house. Our parents organized a beautiful outdoor meal, and we took photos and laughed and rode to prom in a Hummer limo. Trust me, it was cool in 2003.

I remember running the 4x100 at spring track meets, and placing my hand over my heart at varsity volleyball games, and editing the school newspaper on Saturday mornings and t-shirts for senior class picture day.

After dwelling in nostalgia for awhile, I turned to the back of my yearbook and looked at the pages of senior names. We were asked to answer two questions: 1) Where do you see yourself in 10 years? and 2) What did you like best about (our high school)?

I was struck by how wrong so many of us were in No. 1. We were 18, we were taking the world by storm, and we had absolutely no idea what adulthood would be, myself included.

I allowed myself to think non-nostalgically about high school. About the crushing disappointment when I didn't get into Duke. About the senior basketball season I quit. About the fights in friendships and embarrassing moments at New Year's Eve parties.

Still, all things considered, my senior year was pretty charmed. I was lucky. I got to graduate in an arena in Minneapolis surrounded by thousands. I went to my prom and another school's prom. I had a grad party and a farewell party at my best friend's house.

My heart hurt for the graduates of 2020. Even LeBron James couldn't make up for what they'd lost.

Then I let my mind wander further, from high school graduation in 2003 to the spring of 2007, when most of my high school classmates graduated from college.

Thirteen years ago this May, while lots of people my age walked across the stage in celebratory graduations, I sat in a hotel room in Dayton, Ohio. I'd graduated in December 2006, a semester early, rushing through the end of my college experience for a few reasons, 1) college is expensive and graduating early was cheaper; 2) my college boyfriend (now husband!) was two years older and had graduated that past May. I was planning to move to Kansas City, where he was, as soon as I graduated. I barely knew college without him.

That spring was full of heartbreak. After graduation, I moved to Kansas City, but the contracting world of print journalism and the hastening forces of recession conspired to institute a hiring freeze that January at the Kansas City Star, where I'd planned to join the sports staff. I worked freelance for months, covering high school basketball games across Kansas, and serving as online editor of magazines about heavy duty construction equipment and cranes.

I was depressed, my dreams of sportswriting stardom wavered, even as I got a freelance article published in Sports Illustrated a few months after graduation. I was constantly worried about money and worried about my future. In February, I interviewed to cover a minor league hockey team in Florida for the Naples Daily News. Even though I was a native Minnesotan, I'd rarely covered hockey before. I ordered Hockey for Dummies on Amazon and in April, while my former classmates went to parties and the rec center, I moved by myself across the country for my first real journalism job (aside from my $6.50/hour gig at the local paper in college).

While they graduated, I interviewed 20something Canadians in the locker room, where I was allowed in after a team conference and interference from my editor. I was replacing their longtime beat writer, a 40something guy, who had to wonder how a 21-year-old novice was going to handle the team's intense fans and gritty culture.

Life was exciting, but I'd never have planned this when I first started college. While my freshman roommates graduated, I had suffered heartbreak and break up from my boyfriend, moved all alone, and ventured into the real-life world of Slap Shot.

Thinking about these things, I realized it was in those moments - rather than the cotton candy covered bliss of high school senior year and graduation - that I grew up, gained resilience, and became the woman I am today, forged with unexpected difficulty and change and heartbreak.

But what I am certain of is that the kids are going to be OK, no, better than OK. In their capable hands they hold the future of our country, and I trust their experience in these months and weeks will make them more wise, kind, capable and discerning than those of us adults currently at the helm of our nation.

In what they've suffered and survived, I hope they've realized their own strength: what they mean to their families and friends and schools and our world. By graduating anyway, into fear and uncertainty, they've witnessed that what they've learned matters more than the dollars it pays. It matters for us all that they've learned and grown, and that learning and growth will shape the world they inherit.

In the absence of proms and parties and commencement ceremonies, what remains is a need for simple recognition of individuals: that they matter intrinsically, void of pomp and circumstance.

Yesterday I ran down the street in our neighborhood, desperately and more slowly than I did in high school, the advice of my old sprinting coach echoing in my ears: "Run the straightaways walk the curves ... keep going."

Ahead of me on the other side of the street, next to the bus stop sign, I saw a young man standing, gazing into the distance, wearing bright shiny blue graduation regalia and mortarboard. His face looked somewhat troubled.

As befits our pandemic-scarred world, he was alone. Standing there against the incoming tide that said graduations didn't matter because they didn't happen on stage, he stood and waited for the bus, a witness to the dignity of the human spirit.

From several feet away, I took my earphone out of my ear and called to him, "Hey!"

His eyes rose to meet mine warily, as we've come to regard each other forebodingly.

"Hey," I said, haltingly. "Are you graduating this year?"

I looked back him, across the street. The sun peeked through a rare cloudless day in Midwestern May.

He looked back me. A wall between us came down. His lips stretched into a wide smile, showing his teeth.

Then I kept running, and he kept waiting, for the bus and for the world to begin anew.