All the dead of the pandemic

My kids found a dead mouse in the alley last week.

Before we go too much further into this story, you have to know that I am embarrassingly terrified of mice. Spiders, I'll crush 'em. Snakes, I'll grab 'em.

Maybe because I fear mice so much, they - and their larger and even more terrifying rodent brethren, rats - have occasionally been a subject of my writing.

In 2017, a massive pack rat took up residence inside our car, and it spent a good five days besieged in the garage, with carefully set rat traps lined up in precision in the car's engine.

Ultimately, we killed that rat, and as my husband crawled under the undercarriage of the car, to carefully remove the carnage, I felt something like victory, even if peanut butter never quite looked the same to me again, and Jeremiah the exterminator had become a friend of the family.

After the Great Ratcapades of 2017, I've tried to steel myself against mice. They're much, much smaller. But many more plentiful.

My neighborhood in Southwest Minneapolis is a mice motel. We live four houses away from several restaurants, and I can only imagine the mice feasting each night at bar close, on half-eaten burgers and pasta and beer-drenched french fries.

Each fall we have to again fortify the house against invaders, patching holes in the 70-year-old brick, setting traps under the sink and in the basement laundry room. Many October nights, we hear a symphony of scratching and skittering above our heads in the attic, where mice have tunneled the insulation, and traps are impossible to retrieve in the back. We often resort to banging on walls, or turning up the fan to its highest setting.

Rarely, though, do I actually see a mouse. I usually make my husband retrieve the carcass-filled traps, when they occur. Simply seeing pencil-lead-shaped poop surrounding a torn open bag of rice in the pantry a few years ago was quite enough for me.

We had the mice under control. And I thought I had made my peace with my rodent friends. Out of sight, out of mind. We were just trying to survive, feed our families, and find something yummy to snack on for hours at end.

Then the great coronavirus plague struck the world in early 2020. Our neighborhood restaurants had to shut down or start offering curbside take-out only. Everyone was home, all the time (or at least it seemed that way: essential workers carried on their sometimes invisible tasks, lionized and ignored).

I started reading terrifying stories out of New York City and Washington, D.C., about how the pandemic had forced rats and mice out of hiding; their traditional restaurant scraps food sources had gone away, and they were venturing out to scavenge our household trash during the day.

I'd recommend reading this article long before you intend to sleep at night. For just a sneak peek, here's the headline: Starving, angry and cannibalistic: America's rats are getting desperate amid coronavirus pandemic.

In a word: yikes.

Oh, and here's a pull quote:

"A new 'army' of rats come in, and whichever army has the strongest rats is going to conquer that area ..."

Maybe my little neighborhood mice didn't stand a chance. They were so small, and even lean, squeezing themselves into tiny holes in our brick we didn't manage to patch. They barely licked up the peanut butter before succumbing to the guillotine traps.

I felt a twinge of sympathy.

My 7-year-old son's voice pulled me out of my head.

He was shooting baskets in the alley on the neighbor's garage, his biggest adventure in an age of social distancing that had pulled him away from his school and his sports and all his friends. The neighbors were kind enough to let him shoot when their boys were inside, and it was a constant negotiation of avoidance for neighbor kids who used to play together in relative bliss.

The mouse had shattered his brief sense of escape, and he came barreling into the house.

His fear, like mine, was irrational. A tiny mouse was righteously terrified of us, not the other way around. And this one was already dead. Still, its death intruded on our sense of wellbeing and isolation from the wider world.

I walked out with him through the fence to the pebbly alley, its asphalt long destroyed by ferocious winters and falling branches and careening, shortcut-seeking cars.

A tiny mouse, not more than 3 inches long, lay prostrate in front of the neighbors trash can, with its hole in the plastic a longtime favored feeding ground of neighborhood squirrels and rabbits and raccoons.

Its long, naked tail trailed behind it, marking it as other, and somehow scarier, than the far more prevalent chipmunks, squirrels, and other animals who made our yard and alley home, despite our constant encroachment and human pesticide warfare.

I stared at the mouse, its motionless body an invitation to witness a tiny, seemingly insignificant death.

I didn't know why it had died, or how. Maybe it had eaten a poison trap somewhere and fell here, just outside its banquet bag of trash. Maybe it was run over by a car, unused to daytime activity.

I felt disgusted and afraid and also ashamed as I saw it. My son and I peered down. Ultimately, we walked away. The neighbor would come later with rubber gloves and dispose of the body.

Plenty more mice would replace this one. Somewhere, likely, a mouse mother was giving birth to another prolific litter, and they would skitter around the world and find ways to survive.


No man is an island entire of itself; every man
is a piece of the continent, a part of the main;
if a clod be washed away by the sea, Europe
is the less, as well as if a promontory were, as
well as any manner of thy friends or of thine
own were; any man's death diminishes me,
because I am involved in mankind.
And therefore never send to know for whom
the bel tolls; it tolls for thee.

John Donne wrote this in early 17th Century England, and the tolling bells represented funeral bells, rung at churches at the time of another death.

Today, our world's cathedrals stand empty in the face of the pandemic. We hear the tolling distantly, in news articles representing a rising death toll. Today, almost 84,000 people have died in America of the coronavirus, nearly 3 of 10 coronavirus deaths worldwide have happened in America.

One death close to you is a tidal wave; hundreds of thousands of deaths far away is a blip, a falling gradual tide that laps silently at the edges of our toes.

We delight in the killing of mice, and I will likely continue to do so in my basement, across from the washing machine, cut off from the suffering and dying of the world.

For a moment though this mouse in the alley bore witness. Its tiny body screamed against a world who would dare to ignore it and cast it into the darkness of the night.

It screamed, for the thousands languishing on hospital beds; for the nurses scrubbing stains on protective gear that will never go away, the ragged breaths burned into their memories forever; the doctors who couldn't save the ones they wanted to save, the EMTs who rush into contaminated house after contaminated house; the workers on the meat processing plant floor, promised a bonus of $500 if they risked their lives today and tomorrow and tomorrow again; and died without telling the world.

A stimulus check paid, doctors falling to their deaths out of hospital windows in Russia; migrant children and the virus deported to their poverty-stricken home countries, mice skittering across the streets.

I want to scream as my son's first grade teacher appears again on video screen, and I fold away his field trip shirt and cross out another speaking engagement on my monthly calendar.

I keep writing. The squirrel, with its furry tail, busts through the hole in the fence from the alley and digs in the ground for something to eat. He is alive. The mouse is dead.

God save us! God bless the United States of America!

I want to avert my eyes, to make a hair appointment and go back to life. The dead insist I look upon them, consider them, and do not erase them in my greed for my own "normal" life.

I hear the church bells tolling. 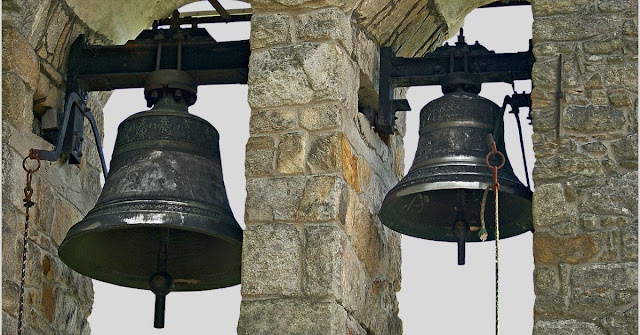