Lots of debate in America recently about federally mandated paid leave time to care for children, or the cost of childcare, or universal preschool.

Some other countries, most of them actually, provide these types of things. For example, only America and Papua New Guinea do not guarantee paid maternity leave.

As a working mom of two boys under age 8, I'm glad these topics are being discussed. But it's unfortunate that most of the people with the means and influence to make these kinds of decisions have no idea what it's like to raise kids in middle class America.

Most American policymakers and political and business elite are past the age of raising children. If they do have younger children, they have the means for multiple full-time nannies and housekeepers. That's a lot different reality than scraping together family funds away from savings or mortgage (or rent) to pay a monthly daycare bill that's comparable to a second mortgage.

This reality often leads to the limbo and constant sense of dissatisfaction I've noticed lurking under the surface in so many of my mom friends, including myself.

Child care costs so much. Maybe I should stay home with the kids.

I cut back at work. I'm not making enough money now, and I'm worried I won't achieve the professional success I would have before I cut back.

I stayed home with my kids for 15 years. Now they're in high school, and I'm trying to reclaim my professional role -- but no one wants to hire me. If they do, it's for a fraction of the salary I once made.

I'm doing great at work, but I missed the last class party and concert, and I feel disconnected with what's happening at my child's school.

We have a great child care provider, but my child knows her name better than how to say mama.

I just went back to work and we started paying for childcare, and my child has been sick three times in the first month. I'm never giving enough at work because I'm missing work to take care of her, and I feel like a terrible mom for subjecting her to all these germs so I can pursue my career.

Being a mom of little ones today in America often feels like you're standing with your feet on opposite sides of a fulcrum, alternately leaning one direction or another until you fall over in exhaustion.

And yet, there's so much good. Women of my generation (I'm 34) have a multiplicity of options that our moms didn't have. We don't have to limit our aspirations to only a few potential jobs. We don't have to work exclusively from an office: we can try to add in telework or part-time plans to our years with young kids at home. We can have babies later in life. We can marry who we love, and we can toil in workplaces that at least theoretically have more protections for women and nursing mothers.

Underneath all these options, though, is a perpetual sense that you could always be doing something different or something better. Summer care for school-age kids is still an over-priced minefield of waitlisted camps, and forget about trying to find summer care for kids together: one school-age and one not.

So much about modern parenting is still set up as though every family has one parent whose role is primarily to parent, who doesn't work outside the home. That's just not financially feasible for most middle-class Americans, as much as that arrangement might have been one that worked best for American families, with the caveat that it's not only women who can take on the role of stay-home parent. Student loan debt also factors into the inability for parents to stay home after attending college.

As for me, I was raised by a teacher mom who graciously stayed home with me until I was 11 -- and my younger brother was 6 and starting full-day school. At that point she went back to teaching elementary school, where she excelled and still managed to be present for us in myriad ways.

I always thought of my mom as a stay-at-home mom, but the reality was throughout those years that she was working as well. She taught aerobics classes for our city, and I remember playing upstairs at our house, listening to thumping from the stereo downstairs, where she played her cassette of that month's workout routines.

My mom, like so many moms, made it work. During her aerobics class that she taught at church, my brother and I hung out with other kids in the church nursery. Sometimes we'd go with her to set up her classroom for school the following year, a memory my husband also has of doing with his mom, who was a teacher as well.

For generations, American moms have been making it work. Doing the impossible while making it all look effortless and beautiful at the same time, or face being shamed if you somehow expressed that it wasn't easy.

You see the fruits of that labor in stories of moms drinking wine while making dinner, and rising rates of alcoholism and drug use among middle-aged American women, particularly women living in households impacted by poverty and lack of opportunity - and lack of access to quality, affordable childcare.

Another consequence of the effortlessness American moms have presented all these years about childrearing and working and managing the house comes out in this supposed idea that childcare isn't economically valuable.

Childcare costs in America today are the highest in history, particularly in the state where I live, Minnesota. And yet childcare workers are some of America's worst-paid workers.

In a society that values everything by the almighty dollar, childcare has become devalued, even as politicians and elites damn it with faint praise.

Valuing those who provide care for children is akin to valuing our future. In that sense, childcare workers are our most important assets in American society, whether they are stay-at-home parents, home daycare providers, or childcare providers working in centers. I would extend that definition to American teachers, who are also among some of the most important and worst-paid American workers.

What does it look like to value caring for children? Maybe it looks like presidential candidate Andrew Yang's idea about universal basic income, which extends to those who are staying home to care for loved ones and therefore cannot work a full-time job.

Maybe it looks like a national childcare system that is non-profit and subsidized by the government, as much as that idea too brings fear into many American parents' hearts.

Maybe it looks like companies continuing to value flexibility and redefine how to value a worker's contributions, and striving to keep workers on-board even as they occasionally step away from full-time work to care for children.

I can only say what valuing caring for children looks like for me, a white, middle-class married mom of two boys under age 8.

For me, the value of child care is in a successful drop off - a trade off that admits I cannot raise my children alone, in a vacuum, and I want to honor and trust those who care for them in my absence, just as society honors the contributions I can make to our country, as a young mom who has also been gifted to contribute as a writer and as a Lutheran pastor.

I remember viscerally what it felt like the first time I dropped off my oldest son, Jacob, at the child care in the health club next to our apartment in Walnut Creek, Calif. I handed him to a young woman named Nicole, with dark spiral curls and a laid-back personally that was perfect for an animated and vocal baby.

As Jacob cuddled up next to her, I walked away through the doors of the gym, where I'd get in a quick workout before getting back to my studies. Jacob was born during my final year of seminary studies, and I completed my last year of classes in a mixed form of online classes and in-person at Berkeley's Graduate Theological Union - a gift again of people willing to be flexible and work with a new mom, and my husband adjusting his work schedule, and my seminary friend watching Jacob during morning classes.

Every time I walked away from Jacob, I felt that mixed feeling. One part sadness and worry -- would my baby be OK? And one part relief and joy -- my baby had other people who could love and care for him, too, and I could continue to exercise my gifts outside being a mom.

As I've gone back and forth in my nearly eight years as a mother from full-time work to part-time work to working from home to traveling speaker to part-time pastoring and writing and being home with kids, I've felt that drop-off feeling again and again. I had it this morning, after we dropped off Jacob at the bus stop, I took Josh to his new-ish preschool at a nearby church.

He grabbed my hand as we walked down the hallway, took off his winter coat and boots, put on his shoes, and walked slowly into his classroom. He found his spot on the rug and, as the kids were counting numbers, I could see his mouth moving to join them - to be a part of the group.

As I walked away to a day full of church council meetings and teaching confirmation middle schoolers, I felt again that mix of sadness and relief - and gratitude. The gift of childcare workers to me, as well as the gift of grandparent care, has been to remind me that I cannot and was never intended to "do it all." This gift reminds me of how much I need others, and how much the world needs me. And how much my boys need a world outside their family.

The value of that life shared with the world at-large is one that cannot be quantified. But it's a value that goes beyond my family and myself to society at-large. So the cost of it, the cost of quality childcare as well as opportunity for parents to work outside the home during their years of raising young children, should be borne by society together, in a way that values the important, future-centered work of all who care for children. 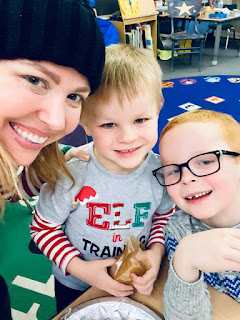 I'm grateful for a part-time work schedule that enables me to attend school holiday parties with my boys -- and a first grade teacher who lets younger siblings come, too.