A King with Us: Real People Involved

Like most Americans today, I've been trying to wade through my normal-ish day -- running my first grader up the hill just in time to catch his bus, running late to a coffee meeting, coordinating child care with my parents for my 4-year-old son -- while at the same time being distracted by news updates about impeachment and the melting down of our nation's government.

One of the stories to catch my eye today from EU Amb. Gordon Sondland's testimony (other than his steadfast admittance of a quid pro quo and the fact that nearly everyone in the administration was aware of it) was the incessant reporting that Sondland was anxious to finish his testimony in time to catch a flight back to Amsterdam. He was reportedly quite irritated to have to return to testify after lunch. 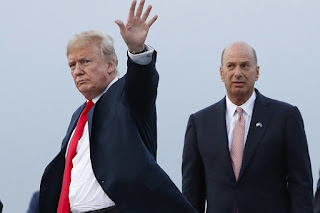 Never mind participation in an impeachment inquiry determining the potential corruption of the Leader of the Free World, Sondland viewed today's testimony, apparently, as just another item on his Rich Man's List of Important Duties.

Sondland's comments about his flight in the midst of American democracy's most tremulous moments illustrate in an unmatched way the extreme division between American elites and the rest of us.

I'm reminded in this moment of a line from HBO's Succession, where the elite Roy family talks about the unwashed masses who might be impacted, or killed, run over Gatsby-style, by the careening irresponsibility of the elite class. They use an acronym to denote this idea, to describe people hurt in incidents of sexual abuse on the company's cruise line.

"Real people," for the Roy family of Succession and likely for folks like Sondland and American elites, refer to people like them. People with money, who testify in front of Congressional impeachment inquiries in the morning and fly out to Amsterdam later that afternoon, as if nothing out of the ordinary has happened.

That the majority of us are considered "not real people" in the eyes of American elites is a fairly unsurprising conclusion, at a time when even America's court system is ruled by money. One man's probation and fines and settlement is another (poorer) man's jail for life. American elites have long learned that their money can wipe away a whole host of inconveniences, making them immune to regular problems like paying income taxes or obeying the law and isolating them in a rarified realm of luxurious getaways, private planes, secret summits.

In my time researching conservative Christian Trump voters across America, and recently traveling the Midwest and the South to speak about Red State Christians, I've become convinced that the greatest American sin of our time is the sin of dehumanization. This is the sin committed when we all dehumanize one another. When we consider others Not Real People. 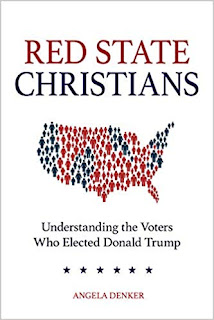 This dehumanization is made possible by the gaps between us, by the silos we are hustled into to occupy space only with other people who think the same way we do: silos created by social media companies who make profit by grouping same-thinking people together for the ease of online advertisers.

We've become so impatient with one another. Sondland's impatience to catch his flight, to get back to his "real life," after the annoyance of testifying about a topic so grave as impeachment is merely a symptom of the greater impatience we all have for genuine connection and conversation with one another, especially with people we consider strangers.

It's easy to consider dehumanization a problem of elites toward the rest of us, but we've all become implicated in our own way, by our refusal to dwell together with people we don't know and/or don't like. It's just easier for elites, because their money shields them from the rest of us; makes them think that transatlantic travel and impeachment testimonials are merely another box to check off in a life far removed from ordinary problems and responsibility to one's country.

In the midst of all this worry and defensiveness and dehumanization of one another, I'm preparing to drive to Sioux Falls, S.D., in three days, to teach on Red State Christians in a Saturday night community event, and then to preach Sunday morning on Christ the King Sunday (followed by more Red State Christians events at the Sioux Falls Barnes & Noble and Augustana University).

In case you missed that, I'm preaching on a Sunday known as Christ the King Sunday in the church year. It's the last Sunday before the season of Advent, the four weeks before Christmas, where churches prepare for the birth of Jesus by celebrating hope, faith, joy and love.

We could use those four weeks in America today.

But first. Christ the King.

America has never wanted a King. We were founded by overthrowing the British King, and in his place we've generally shunned authoritarian rulers. Still, like the Hebrews of the Old Testament, we've occasionally longed for a ruler who will make us great again. Someone who by sheer force might overpower the long-corrupt and unwieldy rungs of America's separated powers, like a bloated Congress and politically appointed federal judges.

Many of the Christian Trump voters I spoke with in the Rust Belt voted for Trump for some of these motivations, which are very real. They wanted an "outsider, "a businessman who would come in and shake up an American bureaucracy made inept by lobbyists, outside money, and inertia. You can empathize with their desires for Trump while still recognizing that Trump, like most autocratically inspired leaders - has promised to quell corruption by only increasing it through his focus on personal self-aggrandizement.

Americans, I suspect, real people all of us - are weary of trying to save our government ourselves. Weary too of promises and career politicians and yes, at this point most of us, weary of a TV President who tweets mindlessly, careening for one outlandish position to another.

This weariness has often led us, like the Hebrews of the Old Testament, to place our hope in a King-like figure. Maybe for some it was Trump, for some it was Obama, for some it's Bernie Sanders or Elizabeth Warren or Joe Biden or Pete Buttigieg.

Regardless of your political views, this Christ the King Sunday reminds us that all people, faced with the expectations of royal salvation, fall short. God promises a different King this Sunday.

In the Bible passage I'll read on Sunday morning in Sioux Falls, Jesus is near death - hanging dying on a cross. The criminal next to him says, "If you are truly King, save yourself!"

After all, we often expect our human kings to do just that. Their self-interest is too often seen as proof of their divine right to be King.

Jesus is not that kind of King.

Another criminal, a Real Person like you and like me and like Jesus, is humble. He notes that justice has been served in light of his crime, but Jesus is dying despite his innocence. He sees Jesus' sacrifice, not his self-interest, as proof of Jesus' Kingship.

"Jesus," the criminal says. "Remember me, when you come into your Kingdom."

Jesus' response reminds me of the kind of Kingship we desperately need in America in 2019. He does not promise a miracle or a return to prior glory. Instead, Jesus promises his presence with the criminal.

I will be with you in Paradise.

King Jesus' promise is a promise not of greatness or aggrandizement but a promise of solidarity and presence. Unlike Sondland, who immediately wants to escape the the consequences of American democracy and get back on his first-class flight to Europe, Jesus promises to dwell and stay in the muck of real American life, even when it gets hard and dirty and even deadly.

I'll be with you, he tells the guilty criminal.

In doing so, Jesus reminds later Bible readers like you and me that Jesus does not divide between real people and not real people like the fictional Roys or the real American and worldly elites. To Jesus, each person is real and worthy of his love and presence.

Jesus encourages us to stay. Especially when it gets uncomfortable, we can't run away from each other - and we can't dehumanize the ones with whom we disagree. No worldly king or queen will save America, no matter how great their slogans or how tempting their promises. Instead, redemption will come by promising, as Jesus did, to be with each other especially when it would be easiest to write each other off and fly far, far away.