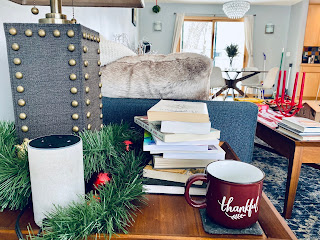 Probably like many of you, I've spent some time this Thanksgiving gaining insight from my Native writer and journalist friends - about ways we can gain a deeper understanding of American mistreatment and oppression of native people, and how we often brushed over that mistreatment by telling untrue fables about the first Thanksgiving.

As a Minnesotan, where our greatest state sin is not Southern slavery but our systemic brutalization of native Minnesota tribes, I feel these stories deeply. They weigh on me this Thanksgiving, at a time in America when it seems so many of our trusted national narratives are under assault. Everything is becoming nuanced, and yet I'm reminded - often through my public school teacher mom and brother - that many of the students they work with are immigrants, who still believe strongly in the promise of America.

I still believe in this promise too -- and I'm a believer that even flawed narratives can and must be redeemed. So this Thanksgiving - I'm choosing to lean into the idea of gratitude, and also the ways that this holiday can represent the value of families and loved ones sharing a meal together, something perhaps rooted more in Christian than American tradition.

In this meal, we pause. Pausing is tough these days. There's always more you could be doing - more you could be learning or growing or exercising or cooking or parenting or planning or saving. But we'll pause and for a moment take stock and be grateful.

This year, standing at the precipice of turning 35 in 2020 and officially embracing middle adulthood, when I take this moment to take stock, I find myself overwhelmed by an overflowing waterfall of gratitude.

I sit here this Thanksgiving Eve morning, gazing at my Christmas tree filled with basketball ornaments and pictures of Jacob in church preschool angel costumes, while my husband shovels outside and the snow silently falls. When I think of Thanksgiving, my heart near explodes. 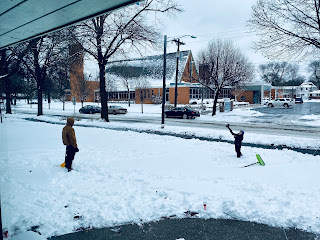 1. I'm thankful for 4-year-old Josh's laugh, the easy way it rolls up from his stomach and takes over his shoulders, shaking them up and down, as his eyes crinkle and his mouth widens in a Cheshire grin. Laughter is medicine.

2. I'm thankful for football catch at the bus stop on a 30-degree morning in November with 7-year-old Jake, when he looks at me and asks, "Mom, what sports did you play in high school?" And I remember I'm just one generation removed from women who earned the right to play sports, too. And then he hugs me before he gets on the bus.

4. I'm thankful for the release of laughter in phone conversations with my mom, when one or the other of us gets something wrong. Two women who rarely give ourselves permission to make mistakes, giving each other permission to be human together.

5. I'm thankful for my dad walking into my house on a Tuesday morning after pickleball, still healthy and athletic at 67. And the way Josh jumps into the air when grandma and grandpa arrive, and the simplicity of being together without a plane ride in between.

6. I'm thankful for a brother, just one, with whom I share a bond of shared childhood adventures and life - and walking together as that bond shifts and changes into adulthood. A brother whose courage I love and admire, and with whom I'll share Thanksgiving this year.

7. I'm thankful for a silver pen, engraved, given to me by Ben's mom, that I carry with me to each book event, from Minnesota to Wisconsin to North Carolina to Missouri to South Dakota. As I write with her pen I bear witness to the enduring value of family, even in a politically divided America.

8. I'm thankful for Grace: both the concept and the church, in Brownton, Minn., outside Glencoe and west of Chaska, where I will begin to serve as Pastor on Dec. 9.

9. I'm thankful for the Southwest Minnesota Synod, where I've reunited with so many friends and seminary classmates, where I did not expect to serve and am blessed by the enduring surprises of God.

10. I'm thankful for Fortress Press, who took a chance on an unknown author, who gave me wings to travel America and reclaim my calling as a reporter, as well as a Pastor.

11. I'm thankful for Ugg replaceable insoles. If your slippers or boots are matted down -- don't buy new ones -- replace the insole. Feels just like new! I am wearing mine now.

12. I'm thankful for Naples, Fla., the place I went all alone, out of the Midwest for the first time in my life, and was embraced by a newspaper and a beautiful community full of sun and volleyball.

13. I'm thankful for friends, the kind who know and love you. The ones who text you and start conversations randomly, in the long days and nights of newborn babies, and job transitions, and life changes, and growing older from the days long ago when we first became friends.

14. I'm thankful for friends, the ones I write with and wonder with, about publishing and pastoring and speaking publicly in a world that no longer trusts journalists or pastors or academics at-large, but we want to trust us, because we want to tell the truth - and so we know we have to find it together.

15. I'm thankful for Lutherans: for pastors and deacons and professors and teachers and Council members and people in congregations, who stick with it despite church changes and decisions and brokenness and misunderstanding. For the Lutherans I've met all over the U.S. who want to be defined by grace, even when talking politics.

16. I'm thankful for Trader Joe's: the way the treats and the decorations and even the body butter help me mark the passage of seasons, and the employees who stubbornly refuse to give in to the stressful and rude side of retail in the holiday season.

17. I'm thankful for Target snow globes: the one we bought in Southern California with Santa on a beach, the nativity scene from Chicago, and the one from last year, 2018, with a mama polar bear and two cubs, for me and Jacob and Josh.

18. I'm thankful that two rounds of the stomach flu only lasted two nights in our house, and mom and dad were spared vomiting. So far. We pray.

19. I'm thankful for bookstores, and libraries, and places where we go to learn about others and about ourselves, for history and literature, and cookbooks, and children's books, that we can read together - and for all those who read and write today, and refuse to believe it won't matter.