So much of the story of who I am today begins there, in what was once the Bellwether State, where jayhawkers and bushwhackers fought guerrilla battles for America's soul in the Civil War, where the Ozarks touch the Plains, where racial wounds have not yet entirely healed but still are raw, where ravioli is toasted - BBQ is made with molasses and brisket served on white bread - and where Kansas City's pro sports teams actually play, much to the chagrin of the city's namesake state.

I am talking, of course, about the state at the center of it all, Missouri. 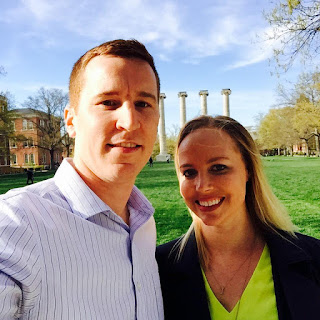 At Mizzou in 2015 for a sportswriting panel

My story there begins inauspiciously. I'd been planning all throughout high school to go to the University of North Carolina - Chapel Hill. I even had one of those vinyl stickers in the back window of my dad's 1989 Buick Century. I also had a brief dream of going to Duke University, too.

But I didn't get into Duke, and UNC waitlisted me. Even though I was eventually accepted, financial realities came into play - and suddenly the school I hadn't thought all that much about was at the top of my list.

I distinctly remember poring over college applications during my senior year in high school, and I remember my mom coming into my room as I was considering plunking down $35 to apply to Mizzou.

"Are you sure you want to apply to Missouri?" she asked.

My mom went to high school in Kansas City, Mo., in the heart of what's now an inner city school district struggling to maintain its accreditation.

Most of her friends went to Mizzou for college, and perhaps familiarity breeds contempt.

When it comes to state public universities, Missouri is sort of middle-of-the-road. Still, it's distinguished by its historic and prolific School of Journalism, the first in the nation, proud practitioners of the so-called Missouri Method that emphasizes real world journalism trainings and contacts in a vast group of alumni called the Mizzou Mafia. You can debate the best J-Schools in the country, your Columbias and your Northwesterns -- but I'll take Mizzou as No. 1 any day.

I wanted to study journalism, and with a scholarship covering all of my out-of-state tuition plus some, Mizzou ended up being even cheaper than my home state university.

I remembered touring it briefly on a road trip from a family visit to Kansas City from our home in Minneapolis. My aunt and uncle were living in Columbia, Mo., at the time, working on graduate degrees and research at the university. The day was cloudy, cold and damp - but still I noticed the unheralded beauty of Mizzou's campus. The stately quad with its columns, the adjacent downtown filled with sophisticated yet inexpensive restaurants where you could still drink quarter draws in 2006 - and perhaps most important to me at the time - a basketball team that had advanced to the Elite Eight in the spring when I was deciding where to attend college.

And so I went. I chose against living in an honors dorm, with an RA who turned out to be one of my now-husband's best friends, and lived instead in the journalism dorm, with a roommate from Chicago and friends down the hall from Minnesota. We went to IHOP at 2 a.m. and even occasionally hung out with current World Series star pitcher Max Scherzer, who was friends with my Minnesota friends at the other end of the dorm.

I didn't have a car on campus, so I biked and walked everywhere. I chose against joining a sorority (I could barely afford college as it was), and I subsisted on seven meals a week in the dining hall, eating oatmeal for breakfast, cereal for lunch, and gorging myself each evening at the all-you-can-eat buffet. Needless to say, I often ate meals alone. My dining hall dinners weren't for the faint of heart.

Right away, though, unhealthy eating habits aside, I loved college. I loved my honors classes where we read classics like Don Quixote, and my philosophy class, Intro to Ethics, where I drank in the power of thoughtfulness and inquiry as though satisfying a thirst I'd had all my life yet never knew where to find the faucet.

I took a course on the languages of mathematics and music, taught by a former St. Olaf college President, with several brilliant engineers and physics majors, and I escaped my lab requirement with a class full of honors journalism students, none of whom were great scientists.

I went for bike rides on the MKT trail and, through an overheard conversation in my advanced French class, I went to try-outs for the Mizzou Club volleyball team and made it - becoming acquainted with a whole new group of friends. A few girls from the team would become lifelong friends, and their presence in my life changed my college trajectory, moving me into Bible studies and giving me the chance to grow in my faith with friends who challenged my Lutheran past, while moving me away from the party scene more common in my journalism dorm and among my Minnesota friends.

Though I remember it with joy, nostalgia, and fuzzy-edged snapshots of freshman year at Mizzou, things weren't always easy. Journalism classes didn't start in earnest until sophomore year, and while I loved my honors college experience, a part of me wished I'd tried to go to an Ivy League school. A Mizzou honors college professor said I had the credentials to transfer to Stanford or Yale, and he wrote my recommendations. Still, I was denied. I found the denial postcards in my mom's dresser at home.

I thought often about going back to school closer to home for sophomore year, like most of my high school classmates, who were still close friends of mine and each other. Often, I felt lonely or uncertain. As you do in your early 20s and maybe a little bit forever.

Still, grace followed me through Missouri and Mizzou.

One of those volleyball teammates, one of my competitors at the try-out, unexpectedly invited me home to join her family in small town Missouri for Easter. I hadn't known her well before that trip, but in it we started to become best friends. She was the oldest of seven siblings, and I fell in love with her whole family and their home in rural Southwest Missouri, where we went for long walks in farm country, and returned home to scavenge pieces of an apple pie one of her dad's Amish chiropractic patients had baked as payment for his services.

In my volleyball best friend, in Missouri, in my classes, my books, my volleyball, my bike rides, our bible studies - I saw my childhood self begin to fade and my adult self begin to emerge, shakily, uncertainly, but excitedly and full of pregnant potential. While it was not easy to begin anew so far away from home, Missouri embraced my nascent growth, and as I started in the journalism school in the fall of 2004, I fell in love too with the newsroom, with deadlines, with sportswriting, editors, and telling true stories that I'd see in print the next morning.

It was that year that Missouri gave me perhaps her greatest gift, an auburn-haired pick-up basketball player named Ben, called only Basketball Boy by me and my roommates on the East Campus for weeks. We met in a weekend pick-up game, and a few chance encounters later, he'd become my first real serious boyfriend, my first love, the first to break my heart, and -- nearly 16 years later -- my husband of six and a half years and father to my children.

Unlike me, Ben never thought of going elsewhere for college. Mizzou was the only place he applied, and he went to study engineering.

There's an old story at Mizzou that if you walk over the clover leaf painted on the ground near the engineering school - and do something - I can't quite remember what - you'll marry a Mizzou engineer. I'm not sure if it was that, or fate, or providence, that brought Ben and me from Missouri to Kansas to Florida to Vegas to Chicago to Minnesota to Vegas again to San Francisco to Chicago again to Orange County to Minnesota again.

But maybe it was mighty Missouri, a state that has held my hopes and dreams, the history of my mother, the beginning of a life not yet known - a place forever pivotal in mine and in the American story.

I wrote about Missouri this week because Ben and I are heading back to Mizzou THIS WEEK -- for a book presentation Thursday night at Columbia's Skylark Bookshop on Red State Christians -- and then book events and preaching in Washington, Mo., -- and a St. Louis event on Sunday afternoon, sponsored by Left Bank Books - and held at the workshop space of the rural Missouri friend I mentioned in this story. God is good. M-I-Z ... 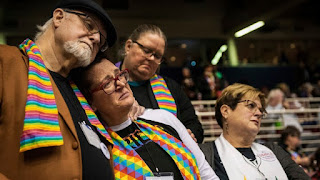