The Little Church that Could

Almost two months past Red State Christians book launch, I've experienced a few highs and lows. A high: seeing my name on a marquee for my launch party. A low: watching my Amazon ranking crash into oblivion one summer afternoon for no explicable reason, and experiencing my mood crash consequently into crisis mode.

A learning moment: do not base your self-worth on your Amazon ranking.

Anyway, though it all, I have been buoyed by a life preserver of consistency and hope.

I met another author recently in the midst of her nationwide book tour, during which local Minneapolis publications who won't return my emails interviewed her and profiled her book, and she talked about the real challenges facing authors - that even in the midst of her incredible publicity tour, she wasn't sure if it was translating into sales.

I remember saying to her, "Well, I've been going to a lot of churches."

I'm not sure exactly how she responded, but she seemed wistful. In that moment I realized my gratitude for a place many of us often take for granted.

What I notice, two months post-book launch, is that the people and places most desirous of engaging in cross-partisan dialogue - the places most willing to bring up tough truths but not lose hope - are pastors and churches. From people I've only known through social media groups for pastors (yes, they exist) - to friends I have nearly lost touch with since seminary - to even family members and acquaintances across America -- it is the local church, from rural America to the suburbs to urban America -- where hope is possible.

This past weekend, I shared three forums about Red State Christians at the church where I grew up. People of various political leanings attended, one of them telling me afterward, "I thought this was going to be a Trump-bashing session, but I was wrong. I'm glad I came anyway."

I'm glad she came anyway, too, as I'm glad that a book club based out of a campaign for a local Democratic rep is also reading and discussing Red State Christians. I fought hard for it to be a book that would resound on both sides of the aisle.

As I look forward to church events ahead of me next month in North Carolina and Missouri, in the midst of swirling political winds and news of impeachment inquiries, I know I must cling ever tightly to the grounding and spiritual renewal found in the local church.

The grind of weekly worship and council meetings and building maintenance notwithstanding - the local church is a unique place. So much of America is driven right now by the profit motive, by the politics and economics of survival. But the church lives on, supported only by freewill donations and a few outdated governmental provisions that say that America values a place where God is worshiped and people come together freely, without constraint.

When people ask me what they should do after reading my research and findings in Red State Christians - what organizations to join, what books to read, what politicians to support - I point them back inward instead. Change, and renewal, begins in our closest relationships. It starts in the healing of families who've been divided politically and isolated from one another. I'm beginning to see too that change and renewal might be possible in the very places once considered irrelevant or backward - the hallowed halls and sanctuaries of our local churches, even - or especially, in places where they've been written off and ignored amid data about shrinking adherence rates.

A megachurch pastor once told me in Chicago he envied my role as a solo pastor in a tiny suburban mainline church. At the time I thought he was being disingenuous. Now though, his words remind me of hope for the future American church.

"You're smaller and more nimble," he said. "You can make changes and grow easily."

Maybe we can, though the changes may be internal - and the growth spiritual first. 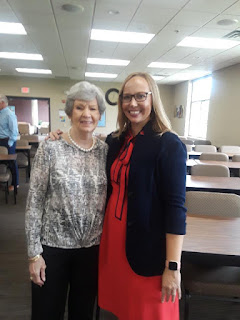 An image from last Sunday's church forum - with a dear friend from my first call congregation in Chicago. Church - at its best - is about relationships, with one another and with God.