I opened the door to the backyard and shouted: "We just got home from the park, and Josh pooped in his underwear!"

"OK. Well I've been out here for hours and I can't get this piece to fit!" he shouted back, pulling up his sweaty t-shirt to reveal a chest streaked with black dirt and dots of sweat, illuminated by the rusty porch light on a muggy September evening.

I slammed the door, its vibration clanging into the boards of wood he'd cut that evening, replacing rotten and warped boards that sagged each time we took a step up the stairs into our 1950s rambler in South Minneapolis. 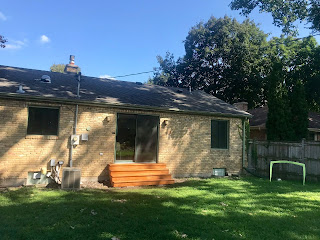 I threw away the unsalvageable Paw Patrol underwear, ran the bath, poured the milk, said the prayers, turned out the lights. Except for the sound of Alexa reading a bedtime story, the house was finally quiet.

I wrestled my dirty, tangled hair into a bun on top of my head, pulled on pajama shorts and a t-shirt. I splashed water on my face: breathed in and out. Another day.

I walked to the back door through the kitchen in the dark house and saw him, again, a spot of light in a shadowy backyard abutting a dark alley. He didn't see me, so I kept watching. He was drilling now, holding nine screws in his mouth and tossing them into the board seamlessly, like a machine in his precision. Bzzzzzzzz, bump bump bump. He loosens his jaw and grabs another screw. Bzzzzzzzz, bump bump bump. Another screw. Another. Bumpbumpbump.

His auburn hair was sweaty, dirty and matted in parts where he'd rubbed his hand across his head, contemplating a board that didn't fit, a sledgehammer blow to a spot of crooked concrete, a maroon paver stone that had to line up just right.

I looked down at myself, underneath my shorts the scar that ran across my mid-section, spidery veins on my upper thighs, worry lines etched into my forehead as I felt my jaw tense up again.

When had we become these people? When had he become this man, this father, this worker - who rode the bus home from work downtown carrying his lunch bag and backpack, who put away dishes with me after dinner and then returned outside to work on the house, repairing broken deck boards, disposing of dead mice, packing dirt into a level ground, weeding and edging and mowing and watering.

When had I become this woman, this mother, this worker - who fills the washing machine with a load of laundry in between writing book chapters and bus drop off and swimming lessons and snacks and picnics at the park? Who records podcasts and conducts interviews with Nick Jr blaring in the basement, who changes pillows and bedding and flower arrangements seasonally and writes meal plans on the refrigerator and makes weekly trips to a consignment shop and Goodwill.

When we met he was studying engineering and he would brag that he didn't need to know how to actually operate the equipment, he only had to worry about the design and the mathematics. He was meticulous, and his brain saw the world spatially: visualizing patterns and movement and objects while my brain thrived in ethereal words and theories and theology.

We played basketball almost every day back then, drinking quarter draws of domestic beer and buying $2 slices of pizza. He lived with three other guys and they each paid $160 in rent. He had just turned 22 and I was 19, and sometimes we dreamt together about a little redhead we'd name Jacob, who'd play basketball, too.

Now every night at dinner 6-year-old Jacob sat before us, pestering him with questions about NBA players and who won last night's game and did he really have to clean up his plate? Jacob's younger brother, Josh, sat across from him, giggling boisterously and alternatively crying out for our attention and love.

He told me he loved me once in a Starbucks in Vegas, where I'd come to visit from Florida amidst a hopeless dream that we could work it out in Sin City - after saying goodbye on a cold and rainy April morning in Kansas, my beige Buick Skylark packed with everything I owned except my heart, which for awhile I'd leave there in that Kansas apartment that was too much too soon. When we got it we said we'd sit on the deck overlooking the Kansas City woods and drink beer in the summer, but we never made it to summer - and barely even to spring.

Now, 12 years later, we had become shadows of our former selves, consigned to providing and working and reevaluating dreams, because the most important ones had already come true, eating dinner with us, nagging us, loving us, costing us, filling us.

We'd lived in California twice and Chicago once, together. We'd been apart and alone, even though I'd call him - before smartphones - and from his desk in Kansas he'd tell me how to get from Tampa to Orlando, when my printed-out Mapquest directions blew out the window on a sultry August day in Southwest Florida, where I wrote about hockey.

Before we got married we stood atop the Cliffs of Moher together and looked out onto the horizon, full of youth and hope and possibility. Since then we'd moved and settled down, watched our parents age and retire, watched ourselves become our parents, pay and delay bills, mourn the loss of the baby we'd never meet, gird ourselves for the moments when our boys would need us too much and too little, and eventually we'd fall into one another's arms again, relievedly. 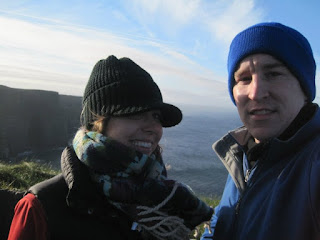 We've done the date nights and the trips together, including to Portland and L.A. and Vegas again, back to Missouri and the college where we met, a stolen lunch in the city, doughnuts at the farmer's market and tennis on a Saturday morning when the boys stayed at grandma and grandpa's.

I love those moments, but they do not sustain me because our love is now suspended in the every day of who we were once and who we have become together. I don't know when my sweaty-basketball-playing college boyfriend became my sweaty-hammering-husband -- when I went from short orange miniskirts around the quad to long gray sweatpants in the laundry room. I do know that as I watched him drill that night, my hands clean of the poopy underwear, our boys ensconced in their beds, the mosquitos circling the light as he finished up the deck, I was still in love.

He saw me watching him, finally.

Always and never, as love ages and grows.