The Problem with Today's Journalism

I'm old enough in journalism years to remember when the newspaper I worked for at the time required for all reporters to get Twitter handles. 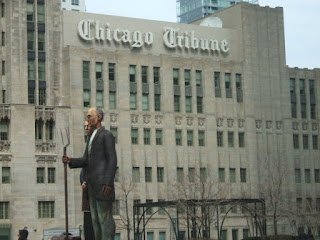 Even for those of us who joined what was once The Facebook as college students, Twitter at first seemed like a strange waste of time. Our Twitter handles were dictated by our newspaper, so that all of us had an abbreviation of the paper, plus our first initial and last name (mine was @NDN-abusch).

Then, in 2008, it was the Great Recession and the advent of social media and multimedia journalism. Our newsroom, despite robust subscriber numbers, faced layoffs and across-the-board pay cuts. At the same time, we went from having to file a simple print story to being asked to carry Flip cameras, record video during press conferences, and simultaneously Tweet the same content we'd just sent in for print.

No one knew exactly what we were doing, everyone was panicking over the state of the industry, and the basics I'd learned at one of America's greatest journalism schools, like AP style and in-depth interviewing and investigations were being deemphasized in favor of strange things like SEO and quick hits and clickbait.

Most of the people who'd been there awhile, well-known columnists and beat reporters, managed to hang onto their jobs through the storm. Some of them picked up social media quickly while others were slower to adopt and still have problems with newsroom technology. They also still have their jobs, usually among the best paid in media outlets.

Those who came later, who graduated after the throes of recession around say, 2012-2013, were that much more comfortable with digital and social media and, given the fact that they were entering a more prosperous media environment as cheap new grads - leapfrogged many of us who were just a few years older and snapped up prominent reporting jobs. Many of them got these positions after serving unpaid internships or fellowships at major national publications, headquartered in New York City. Others joined opinion-based conservative media as an alternative to what was seen as liberal mainstream media. After Trump's election, places like CNN hired expansively from these conservative outlets to try and understand "red America."

I remember during journalism school an uproar against these unpaid internships and fellowships. Set as they often were in New York or D.C., serving an unpaid internship necessitated an income source generally in the form of wealthy parents. I know for me, coming out of a public university with no debt due to scholarships and working my way through school, working an unpaid internship was out of the question. School was done. I left my parents' cell phone plan and health insurance. It was time to make money.

Still, after layoffs and pay cuts at the newspaper, I answered a long-held call to ministry and left journalism in 2009 to attend seminary. Today, 10 years later, I've entered back into the field sideways, though I never completely left, having kept freelance writing through seminary and moved from sports to faith and social issues/politics. I just finished my first book and work part-time in ministry and part-time as a journalist, writer and speaker.

What I've noticed about the field of journalism, which I love so dearly, troubles me a bit. The trends that I first noticed in J-School in 2003 had exacerbated. The most well-known journalists in America made their name by being as argumentative, pushy and opinionated as possible. The idea of a dispassionate, empathetic, polite interview was all but forgotten. In fact, reporting as a trade had become increasingly less and less important. Public figures and celebrities had figured out how to use social media to become their own media outlets. Access journalism, a problem already in sports when I worked as a hockey beat writer, had spread to other fields as well. No one needed journalists in the way they used to, when social media could spread the word on its own just as well. Reporters sometimes had to cozy up to sources to get stories, and sometimes they kept mum on stories that would damage their source - or team - or organization.

I noticed that most quality reporting and investigation involved data-driven stories, done by journalists with the patience and expertise to navigate FOIA procedures - and news outlets patient enough to support project stories. A few nuanced, enlightening profiles of both well-known people and relative unknowns still escaped through the fray. But they had become the exception rather than the norm.

At age 34 I never thought I'd be one to decry the future of media and long for "the way things used to be." To a certain extent, national journalism has always been dominated not by trained journalists but by wealthy and connected Ivy League grads who made their way into Washington and New York City newsrooms to report on their parents' friends and connections.

Still, there used to be a vast contingency of local newsrooms and local media across America made up of people who were dogged and determined to uncover and tell the truth. It's tough for that kind of journalist today. Three years ago I went back to the University of Missouri Journalism School to serve on a sportswriting panel. The school newspaper sports editor told me that Mizzou J-School grads were often lucky to get entry level jobs that paid above $25,000 -- in 2016.

Kids kept entering journalism schools hoping to tell and report the truth, but they often found that unless they went into marketing or advertising, high-profile journalism jobs were limited to those who were already connected and/or could miraculously find a way to live in New York City or Washington, D.C. while serving an unpaid internship.

Entering back into the world of journalism in 2019 has been an interesting experience for this former sportswriter. I inched my way back on to Twitter, this time using my actual name as a handle. I discovered quickly that Twitter was the center of today's media world. The number of Twitter followers someone had was an easy shorthand to understand anyone's influence or power. That all-important word in non-fiction publishing: platform - ostensibly meant more than Twitter, but I found practically it really meant: How many followers do you have on Twitter?

President Donald Trump famously won the presidency via Twitter, and sometimes he seemed to be dictating each day's news cycle while lying in bed with his phone in his hand, tweeting out national policy and random screeds, full of misspelled words.

In my opinion, instead of setting their own news cycle and self-determining the day's top stories, our nation's top journalists and publications followed Trump right down the rabbit hole - often encouraged and prodded by newsroom execs who came from hedge funds, not journalism schools.

To spend time in Journalism and political Twitter today is to realize that the medium really has become the message. Entire stories in major news media are all about Twitter, or someone's conduct on Twitter. I know certain journalists or media personalities who won't respond to messages or follow anyone who has less than 10K followers as a matter of policy.

What this does is create a self-sustaining, perpetual media news bubble. Journalists, politicians and media figures spend all day on Twitter talking to each other and telling inside jokes. I find myself drawn into this as well because it can be intoxicating and also - there's no match for Twitter when it comes to connecting to journalists or media figures and finding a way to get your own writing out into the world.

Still, even as I've always been a champion and supporter of the egalitarian effects of social media, I have to say that I wonder about Twitter's effect on journalism. If you want to be noticed, you have to be loud, impolite and brash. There's little room for nuance, no room for politeness or respectful dialogue. The loudest, most vulgar voice takes all the oxygen out of the room for everyone else.

I was excited whenever someone with a large Twitter following would retweet my writing work or mention my book. But what often happened is that an unruly mob of retweets and likes followed, generally polarized on the right or the left. Rarely did a viral Twitter post create space for dialogue between people who disagreed. Instead, we all found fodder for what we already believed to be true, and people were determined to put me and my writing into a liberal or conservative box, something I've always resisted with every fiber of my being - but I'm not sure I've been successful.

Meanwhile, in the world, news was happening. Journalists were doggedly reporting that news and following up with stories around the world and - in most cases - doing exceptional work. But they were asked to do so with Twitter in their right hand at all times, judging them, requiring their attention, pulling them into snark and polarization and "gotcha" quotes and questions.

I know a lot of journalists don't like this kind of stuff; they dislike the blowhards on Twitter and the books that consist of one person's opinion and the pay-to-play favors that exist among powerful people who went to college together and vacation in the same spots and expect coverage as a matter of course.

Still, journalists often find themselves a part of this Twitter-created media bubble because these are the stories that generate clicks, that generate tweets. It's hard to break through it all with a true story that might be more complex - that might offer ammunition to both sides. And I think it's also true that journalists sometimes enjoy interviewing the person who's a bit of a blowhard - they want to shame or embarrass that person, instead of finding the person to interview in middle-class America beyond the Beltway, with doubtless fewer Twitter followers. It's why journalists love to hate Trump, and lead with his name more than any other.

I was complaining about all this to my engineer husband the other day and finally he said: "Well you just have to start being more snarky. You have to be more like that when you interview."

I'm not saying the world doesn't need opinionated journalists who will call sources on their b.s. We need those journalists. But I guess I'm OK with the fact that that's not me, and it's never going to be me. I will say humbly that the world also needs journalists who are OK with not being the story - who are OK with being surprised in an interview and leaving the press conference to find the real story in a back hall with no cell service, and tell that story even though the people in it aren't famous.

There are countless journalists doing that grunt work today: in America and around the world. My frustration is their stories often aren't the ones that are being told. These journalists are the ones who are underpaid and don't get good benefits and have to listen to people complain all the time about the media - when they're just trying to report the news and tell the stories without being the story themselves.

I read one such article today by Diana Marcum, who only has 3,000-some followers on Twitter but also has a Pulitzer. She's doing journalism among people who aren't often making headlines, but who are the very best of America - like the story she tells today of Gil Ramirez, in Mendota, Calif.

And then retweet it, or share it, or tell your friends. Insist on media coverage that's dictated by something other than retweets or snark. Support non-profit journalism. Buy books - and not just ones that are on the bestseller list. In America, we still have choices when it comes to our media. It's time to choose truth over clicks - and reporting over posturing. 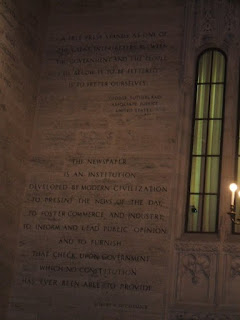