The Family: A Review 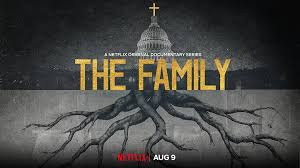 It took me a minute to sit down and watch Neflix's recent miniseries on a shadowy Christian political group. Mostly because I tend to watch TV late at night to wind down or take my mind off my typical work, which centers on American Christianity, conservative politics, and the ways Jesus' Gospel is being lost in favor of power, money and control.

What I'd heard about The Family, produced by writer Jeff Sharlet, simply hit a little too close to home. The group, which prided itself on secrecy and lack of transparency, purported to be all about prayer and faith. Practically, that meant the group spent its time cozying up to wealth and political power around the world with little concern for human rights or everyday people.

I spent 2018 confronted with many of the same hard truths about American Christianity and politics, as I traveled the country interviewing and researching so-called Red State Christians, who had supported Donald Trump in 2016, for my recent book. While I found that most of the Christians I spoke with were somewhat conflicted, open to nuance, and genuinely seeking Jesus -- I also saw troubling support for Christian Nationalism in some of America's largest and most powerful churches. These Pastors and Christian leaders openly excused all sorts of moral misdeeds and human suffering in return for Christian political power. They got their Supreme Court justices - but as President Trump just days before I started The Family claimed he was "the chosen one," you had to wonder if it was worth it? Had Jesus become just another codeword - his life, death and resurrection erased for a sort of Gnostic, elitist faith?

Ultimately, I had to find out. Not least because I knew of Sharlet's other writings and found him to be an immensely credible and reasonable journalist, with little of the penchant for argument or sensationalism or "clickbait" that often plagues modern American discourse.

I don't do a lot of reviews on here, but it's a fun thing to do occasionally (in my freelance life, I'm taking on more book reviews and finding it a fun new thing to try).

The Family toes the line between faith writing and journalism really well, and it effectively dives into theological or biblical debates without veering into esoteric statements that the average viewer would find confusing.

I was impressed by the access the filmmakers had to Family insiders and old films and speeches from elusive former leader Doug Coe.

I thought The Family accurately depicted, in detail, the ways that politicians and power-hungry leaders have twisted Christian stories and ideas to support their political aims and access to power. The miniseries cited Family claims about the story of David, Paul's ministry, the Old Testament book of Leviticus, among other Bible stories.

The Family did an excellent job of showing and not telling in its indictment of twisting Christianity for political gain, particularly in conservative politics.

There's a great line in the miniseries that stuck with me through my viewing and beyond - that Sharlet wondered whether the leaders of The Family were exceedingly naive or exceedingly cynical in their association with dictators and unscrupulous politicians. I think that combination: naivete and cynicism -- is indeed at the root of many problems facing American Christianity and politics today. And it means that people seeking to confront those problems need to use a two-pronged approach: empathy, kindness as well as challenge and truth-telling. Many of the people caught up in The Family do have a sincerity and a hope that they're furthering their faith path and that their prayer is genuine: that through their prayer and association with dictators and with leaders that they will change the course of civilizations. But this hope of course is naive at best and cynical at worst. So those seeking to challenge the twisted Christianity at the heart of American conservative politics need to discern first whether naivete or cynicism is operative in the particular person they're speaking to - and at that particular time. I'd even be so bold to suggest that this same odd combination of naivete and cynicism is operative in many of Trump's actions as president as well.

Another great line from The Family speaks of using Jesus as a mascot. One viewer on Twitter suggested that you could replace the word "Jesus" with anything else as the leaders of The Family talked, and their words would mean the exact same thing. It's important to learn how Jesus can move from the center of an organization to being used as a sort of talisman for the group to operate outside his actual practice of kindness, humility, and dwelling with the least of these - criticizing and prophesying against political elites.

I've heard some criticisms of The Family's style, that it wasn't direct enough in calling out the twisting of Scripture, and that it didn't say enough about the misogyny and patriarchy of the organization. I agree that the film could have benefited from more direct language about these topics, but at the same time I appreciated the reporting style that gave people opportunity to draw their own conclusions. I think it's the task of writers and reporters and leaders after viewing The Family to speak directly about these topics and how particularly the patriarchy and misogyny of The Family destroys and inhibits the very American families it attempts to preserve. After all, how could these politicians be good husbands and fathers when they're forced to spend all their time living apart from their families in a community made up exclusively of men?

As I gave The Family 4.5 stars, I did find little room for improvement, and most of it is based on my personal tastes. I would have liked to see the Bible stories and theological tropes The Family held sacred be fleshed out more and criticized. The Family viewed King David as sanctioning marital infidelity, but they never talked about God sending the Prophet Nathan to condemn David's actions and David's resultant repentance. I would have also liked to see more talk about what a positive, Jesus-centered, Biblically true Christian political voice might mean, sound like, or look like. And, I would have appreciated a deeper dive into the gender divisions of The Family and how that influenced its actions and failings.

If you're curious about American politics, Evangelical support of Trump, and Christian influence in politics - you should watch The Family.

If you're a person of faith who believes that Christians have only had positive influence in politics - you should watch The Family.

Basically, I think everyone should watch it. A lot of what I saw reaffirmed what I already knew through research and working as a Pastor -- but most people don't have my background, and for them, a lot of these ideas and truths will seem fresher and newer than they did to me. Most importantly, given my deep research and time spent on these topics - I found The Family to be accurate, truthful, helpful, and in-depth. I appreciate Sharlet's courageous reporting on these topics for decades, and I'm glad his reporting is finally starting to get the full attention it deserves.