Yesterday, about 2 p.m., about four hours after I initially planned to get to the gym, I finally made it.

My 6-and 3-year-old boys ran headlong into the child care center, and I pounded my sneakers up the stairs, ready to run.

It's the dog days of summer now, the days of pulsating heat and unremitting sunshine, and even indoors it's impractical to wear the long, compressing workout leggings that creep up around my belly button and flatten any vision of stretched out, bumpy post-pregnancy skin.

Summer means running shorts. And I'd spent almost the entire month of July looking again for running shorts. They were reliably too short or too long, too high cut on the sides, which might be a flattering look for 20somethings but in my case exposed far too much 30something cellulite.

When purchasing running shorts as a pear-shaped mom in your 30s, every pair holds a potential landmine. Too tight legs, too loose waist. Shorts that ride up. Shorts that fall down. Shorts that don't prevent the dreaded chub rub. Shorts that show the outline of your underwear. Shorts that give you camel toe.

I ended up with three different pairs in three different sizes, and while I realize the fact that this was a barrier to me actually getting out and doing the darn run is pathetic, such is life in a society where women's looks are constantly monitored - by others and by ourselves.

Yesterday I wore my old running shorts anyway. It had been a long morning of working from home and doing laundry and refereeing brother fights, and so getting dressed at all was an accomplishment, much less digging out the more flattering running shorts.

I finally got out there and as I was running I made the mistake of looking down. Set free from its high-rise compression leggings prison, my stomach was bouncing along as I ran. Perhaps jiggling is a more accurate term. Up and down. Up and down.

My tank top was baggy too and for a second I thought the whole world could see it, moving of its own accord as my tired body huffed and puffed up a hill.

The work I'd put in, both mentally and physically, in seven years of rearing and bearing children, seemed insignificant in that moment. In better shape, some 50-odd pounds lighter from the day I had my second son, accomplished as a mom and a pastor and awaiting publication of my first book, my insecurities seemed set loose and dancing around, up and down, up and down, inside my swollen stomach that refused to be re-tamed to its former six-pack pre-pregnancy beach volleyball glory.

Still I ran, up a hill. My body, this body, carried my children and now carried me.

I realized something had changed, even in the past year or so of increased cardio exercise. In those first steps of my run, in my first movements - I no longer felt the urge to pee. Something deep inside of me had tightened up again. I could do jumping jacks. I could run without fear.

Progress, albeit small and invisible to the outside eye, had been made.

I decided to take it as a victory. Small but mighty and important. And it makes me smile.

What small victories are you celebrating today? 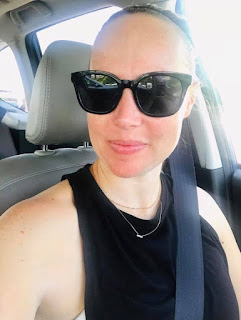