The Church that eats its own

I write this post with a heavy heart, hearing multiple stories this week of friends and colleagues who have felt betrayed and alienated by the very churches to which they gave all of themselves.

I write this post knowing that my church experience has been uncommonly blessed; growing up with a valued mentor pastor who baptized, confirmed, married and ordained me ... serving internship and three pastoral calls in churches who have loved me and embraced my gifts; who have treated me well and cared not only for me but also for my family.

I have been uncommonly blessed by the Church, yet even I see the heavy burden carried by pastors, church workers, and volunteers in the American Church in 2019.

I sense a great need for reform, repentance, and recognition of the lives the Church has damaged, and the ways the American Church, in its pursuit of money, power and influence, has succumbed to the very worst instincts of American ambition, at the cost of telling the true story of a humble Savior who saved through sacrifice.

I hear stories of female pastors who work diligently for years, only to find out that they are paid a small fraction of their male counterparts, and who are shamed when they ask for a raise.

Isn't ministry about more than money?

Church workers are often asked this question. But maybe we need to be asking this question to the Church itself.

In my hometown of Minneapolis, where our family moved back about a year and a half ago, I am aghast at the sums of money being spent on maintaining under-used church buildings and propping up crumbling institutional framework. Church councils and church leadership don't bat an eye at spending thousands to millions of dollars on facility building and facility maintenance, while staffing costs, especially in the area of youth and family ministry, are often the first to be cut.

Standing behind these church workers are families: spouses and children, many of whom have moved across the country to follow divine calls into ministry and into serving others and telling the story of Jesus.

Too often, their sacrifices go unheeded; they work without benefits or without raises. The headlines cry out, rightly, about megachurch pastors who buy yachts and Lamborghinis, about Christian college presidents who make inflammatory remarks about immigration or politics.

Lost in the milieu are the everyday church workers who work hard for little pay to sustain a dying institution because they believe not in the institution but in the name of the God who began it.

I would like to tell their stories more broadly as I continue my blogging journey. I tell many of their stories in my book, Red State Christians; stories of church leaders and volunteers in the trenches, working to build surprising coalitions of people who may not find themselves working together in any other place but the church. The Church makes compromise possible; the Church makes revolution possible; the Church makes it possible for enemies to become friends and coworkers.

Today, I urge American churches and American church leaders to look in the mirror. For all of the Church's leadership in broader American and global issues, how are we treating our own? Have you thanked your volunteer coordinator or your youth pastor? Have you advocated for a raise for your children's ministry director? Have you appreciated the unique gifts of a pastor who is not the senior leader? Have you paused to recognize what it takes to keep your little church going, and the tireless and often thankless work of volunteer church council members and church volunteers?

Jesus invested in people. May the American church do the same. Throw out the hypocrites, the high-paid Pharisees, the abusive and lying leaders who make headlines.

But invest in the future. Invest in the ones who know they are unworthy to even carry Jesus' sandals, and yet they carry his word, and they share his love - often while feeling they are utterly failing. 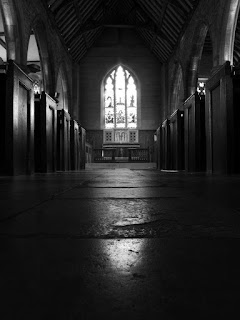