Finding Faith in the Flood: for STORY Magazine

Author's Note: Today I want to share with you a piece I wrote for Luther Seminary's magazine, STORY. You can find the original story here on page 16, and read more articles here.

As Hurricane Season begins again, I am remembering the devastation of 2017: from Puerto Rico to Florida to Houston. For those of you reading far from the Gulf Coast, the Atlantic, or the Caribbean, it can be hard to imagine what it's like to weather a hurricane - and recover from the destruction left behind from torrential rain, lingering floods, and gale-force winds.

A few months ago on assignment for STORY magazine, I spoke with a Lutheran Pastor whose home was flooded in Houston during Hurricane Harvey in August 2017. I hope her story touches you, inspires you, and reminds you of the endurance of God's grace - as it did for me. This hurricane season, please keep the Gulf Coast, Florida, and the Caribbean in your prayers - particularly the people of Puerto Rico, who have suffered much with little assistance from their fellow American citizens and government. 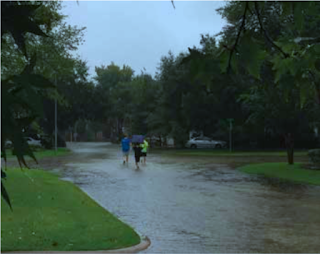 Fridays are her day off, and Beth and the church staff had spent the three days prior finalizing a new communication plan for Kinsmen Lutheran Church in Houston, where she serves as senior pastor.

Beth figured she and her staff were being overly cautious. News reports suggested that Hurricane Harvey, just upgraded to a Category 2 storm, had the potential to hit Houston. Beth’s home in nearby Spring, Texas, had previously experienced damage during the April 2016 Tax Day flood.

In 2016 “the floodwaters came right up to our door,” Beth says. “My church council president showed up with her red rain boots on ... Her son and his whole Scout troop were out there in kayaks.”

Beth thought her family had already seen the worst. Even though they had less than an inch of water in their house, her husband, Mark Warpmaeker, executive director of Alpha Houston, and their older son were able to stay in the house throughout that flood.

Beth carried her past experience with her as she prepared her church—and her home—and her family—for Harvey. She turned on the news and heard a scary report, then picked up the phone and called the church office. 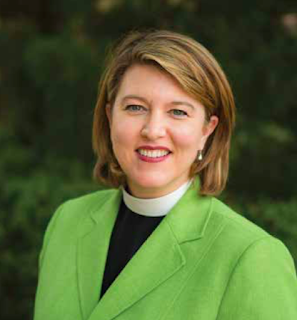 “We’ve got to move all of our computers up higher. We need to get everything off the ground,” Beth told office manager Julie Hughes. “They’re saying it could be 30 inches!”

Everyone was in disbelief. Even Hughes’ husband, who worked for the local fire department, couldn’t imagine it. He said that would be “biblical proportions.” 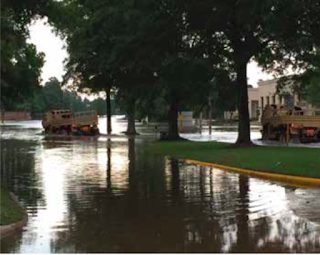 Beth and the rest of the Kinsmen Lutheran Church staff and leadership worked valiantly to protect their church, and fortunately, flooding did not impact the building.

The same would not be true for the Warpmaeker home, despite it being far inland.

She believed they were being overly cautious as they prepared for the possibility of water entering their home.

“We were still thinking a foot or 15 inches at the most,”Beth says.

On Sunday morning, instead of preaching and leading worship, Beth joined Mark and their sons in trudging out of their house, arms full with their dog and a few belongings in those large plastic tubs. The water was already up to their thighs.

Their home would never be the same. Hurricane Harvey surpassed everyone’s predictions, dropping nearly 50 inches of rain on the area.

With Harvey’s center moving back into the Gulf of Mexico, and Houston sustaining devastating winds, rain, and flooding, a decision was made to cancel Sunday services.

Saturday night, the Warpmaekers shuffled some things up to their second floor and put everything else on top of counters. They put their sofas and furniture on cinder blocks and saw horses. Everything they thought they would need when they were evacuated was put in large plastic tubs. 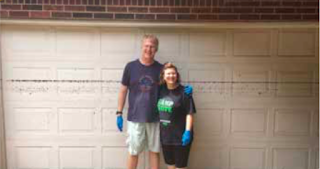 The Warpmaekers outside their home post-Harvey.  The black line on the garage was the flood's high-water mark. Photo provided to STORY by Beth Warpmaeker

For the Warpmaeker family—and for much of greater Houston—Wednesday, Aug. 30, would be Day One of the rest of their post-Harvey lives. Walking back into her now- flooded home, sodden with what had been more than four feet of water in the house, Beth felt her heart break.

“There was a clear high-water mark 50 inches off the floor. Everything we had put on counters was lost,” Beth says. “I had just completed my [doctor of ministry] thesis. I had put my brand-new diploma on top of our filing cabinet, and it was covered in dirty water.”

She felt a painful sting realizing that, along with the diploma, she had lost irreplaceable materials acquired while earning her doctorate. “All of the notes from my advisors ... things I cherished ... all my class notes and books” were gone, she says. 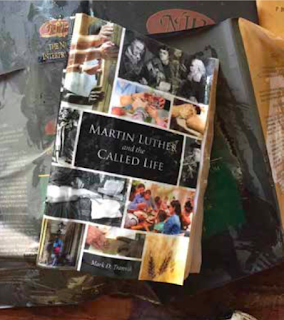 Many of Pastor Beth's books were ruined in the flood, including personal notes written during her Doctorate in Ministry studies, completed in 2017.
Photo provided to STORY by Beth Warpmaeker

Her caution had not been enough. The “biblical proportions” flood had indeed covered much of what the Warpmaekers had worked so hard to build.

“I was just totally in shock,” she says. “We kept saying to each other: ‘I can’t believe this! You’ve gotta be kidding me!’”

The next days and weeks would blend into one another as the Warpmaekers sorted through their possessions while carrying on with Beth’s responsibilities as pastor. Kinsmen’s church staff were hard at work posting updates and spiritual guidance, while also organizing teams to go out into the community to help flood victims with clean-up or to assist with rescue missions. Kinsmen staff even created a new version of their summer camp program known as “Camp Hope: Harvey Version” so that children in the community would have a safe place to go while their parents sloughed through the aftermath of devastating floods.

At first, Beth didn’t want a Kinsmen team to come to her home. Surely others needed more help, she thought, and her family could manage. But as she waded through more and more soaked, molding, and ruined personal items, she finally called Kinsmen’s director of congregational life, Lynnae Schatz.

“At some point, I was like: ‘Just say yes,’” Warpmaeker recalls. “But I told her to make sure everyone else was covered first.”

In the initial days of clean-up and repair, what struck Beth and Mark most was the sense of community post- flood. People walked up and down the streets of Houston, offering help. Beth noticed a common thread as she heard stories from flood victims: my church helped me. She realized that peoples’ faith communities brought an incomparable sense of hope—that the future would not be one of destruction and death, but community healing.

After weeks of painstaking demolition, clean up, and rebuilding, the Warpmaekers came to the sad realization that their house could not be salvaged and they’d need to move.

A bleak fall turned to winter, a new year began, and the Warpmaekers settled into the new home. They could see the end of their Harvey story, and it was an odd mixture of pride in their community, despair at what so many had lost, and gratitude for the Savior who made it possible for them to begin again.

Mark sums up the family’s experience this way. “There was a deep sense ... that God had more in store for us. That even though there were weeks when it was hard to find something positive—if you really stopped and looked—you would find that joy. Sometimes it was just to be with a neighbor; sometimes it was to go and help someone.”

Beth's Christmas Eve sermon was her first time to speak publicly - and personally - about Harvey's impact. She spoke about Jesus coming as a baby to dwell on earth not in pristine circumstances, but to dwell with all of humanity even in the muck and mire and the difficulty of human existence. She held up a dirty work glove, ubiquitous in Houston during Harvey clean-up efforts.

“The symbol that reminds me the most of God getting into this mess with us ... the symbol I want to use now is the dirty work glove,” Beth says.

Now, when she remembers seeing work gloves all over her community—and all over her house—Beth doesn’t just see the devastation and destruction of Hurricane Harvey. 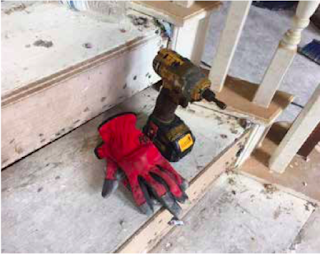 In the work gloves all over Houston post-Harvey, Warpmaeker saw God
Photo provided to STORY by Beth Warpmaeker